Or rather, it never left.

Just two years ago, everyone was crying the Twitter-end-times were near:

Seriously, we all though the platform was on its deathbed:

Fast-forward to today, and not only is Twitter alive – it’s … growing?

Twitter has sustained steady, albeit slow growth over the past three years, and has proven a useful marketing tool for many brands. Monthly active users have remained steadily between 67 and 69 million for the past two years. Even when people were shouting Twitter’s Armageddon, statistics indicate that people are using this platform to stay tapped into what’s happening across the country. Add in a crackdown on the bots made infamous on the platform, plus the presence of both professional and personal active users, and you have a strong user base that will keep using the platform despite the naysayers.

Twitter’s comeback (or neverleaving) can be attributed to many factors. But its strongest users with the highest engagement can bank their success on one of three factors: their content is useful, relevant or funny. There is no single way that people use Twitter – and therein lies its immense power as a social media platform.

You have everyone from brands (hi, @Wendys) to school district superintendents using the space to connect using 280 characters, hashtags and video/photo/gif imagery. Twitter’s immense variety gives users the power to control what type of content they put out and what communities they tap into. For people without the time, skill or photo-editing apps needed for Instagram, or the money and detailed targeting strategies to play the Facebook algorithm game, Twitter is the social media dream. You don’t even have to pay to play.

With Facebook’s algorithm changes and privacy issues, and Instagram’s saturation of all things fitspo and meme, people have taken to Twitter to connect with brands, celebrities, thought leaders, news and all things pop culture.

The audience on Twitter covers everyone from Gen Z to seasoned politicians, but they all have one thing in common: they want to stay connected. Whether it’s to a like-minded community through hashtags, news updates, celebrity stalking or company information – Twitter is THE platform to get immediate updates from the sources you care most about.

When it comes to who we’re seeing drive the most success on the platform, they usually fall into one of these buckets:

B2C companies are personifying their brands through Twitter. Today you can see everything from snarky to cult-like to nerdy – and consumers are loving it, not just for the witty comments and great discounts, but because these brands are interacting with their customer base. Seventy-eight percent of people who tweet at a brand expect a response within an hour – and the companies that respond can increase brand loyalty and customer satisfaction in 280 characters or less. 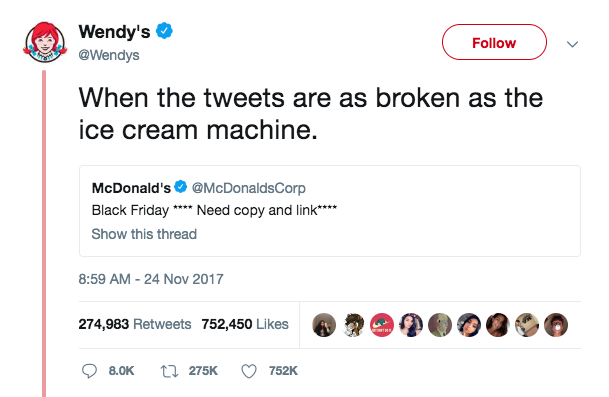 Across multiple industries, thought leaders are connecting with other thought leaders to share the latest news and insights. People come here to teach, learn and share, often times through Twitter chats and more.

For content-heavy news and media outlets, Twitter is a great place to spread the word about what’s happening in today’s world, from international and national outlets like CNN, ESPN and E! to local stations.

Schools and companies share updates on closings, weather and other changes that will affect their employees, consumers and students. Companies can also use Twitter to post updates about industry news and internal announcements.

Do you know what’s happening in the world of pop-culture memes? If you’re on Twitter, odds are that you do, because every brand, celebrity, and average joe is talking about them, retweeting them or making them. If you missed what’s happening on Twitter, no worries – Instagram meme accounts are screenshotting and sharing Twitter users' thoughts daily. 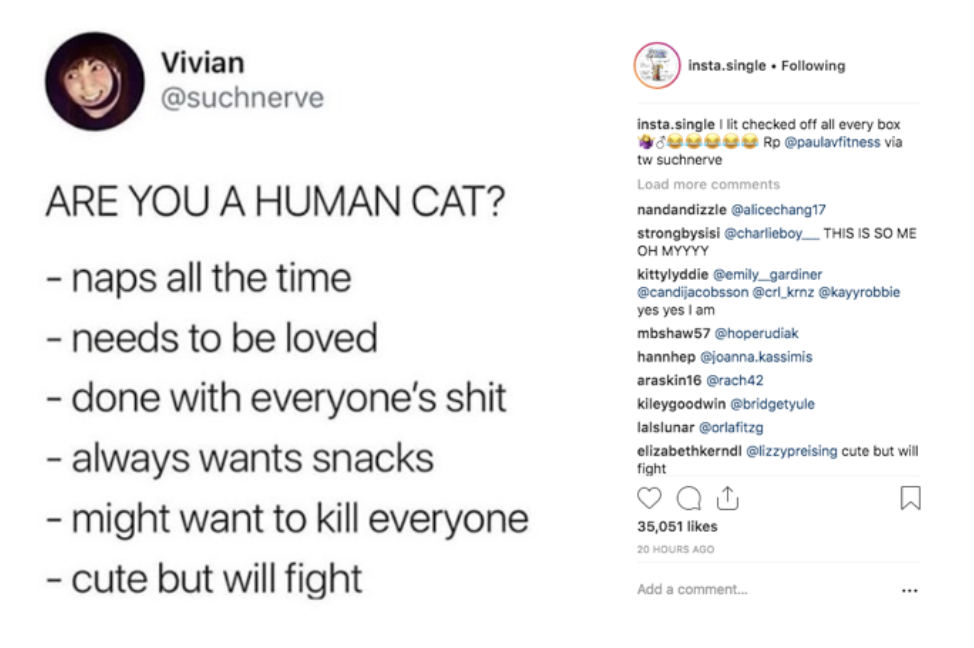 ICYMI, high-profile people are loving Twitter. From Chrissy Teigen to Elon Musk to a certain high-ranking politician, they are using Twitter as a way to share their thoughts immediately with millions of people (what could go wrong?).

Large companies to smaller startups have also seen success on Twitter, from a combination of niche updates, company culture posts and customer-service interactions. Even if your company is in a B2B or drier B2C industry, Twitter can still be valuable to connect with people that care what your people have to say. 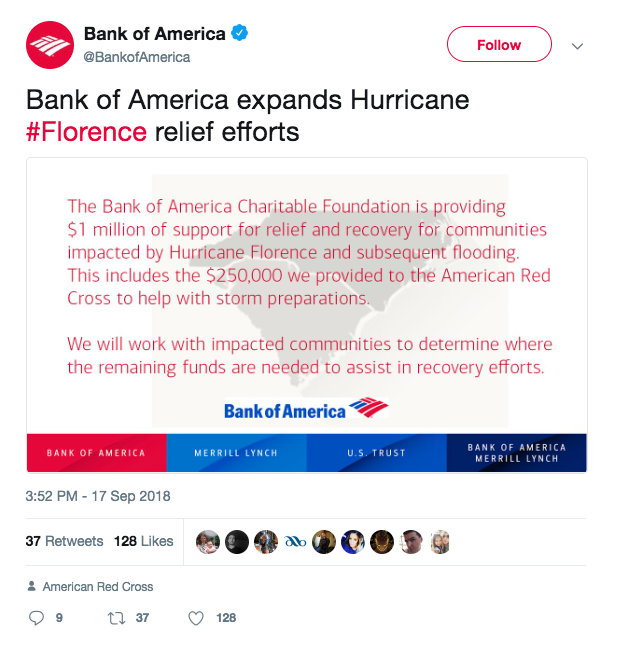 Yes! Just like you couldn’t believe it wasn’t butter, get ready to hold onto your hats at the staggering reach a well done Twitter campaign can have.

If you haven’t heard of Mayochup, you have been living under a rock. If you have, then you've been waiting with a kind of disgusted eagerness with the rest of the US to try Heinz’s latest condiment. The name says it all: mayonnaise plus ketchup, the ultimate French fry-dipping sauce. How did this idea get started, you ask? Twitter (duh). 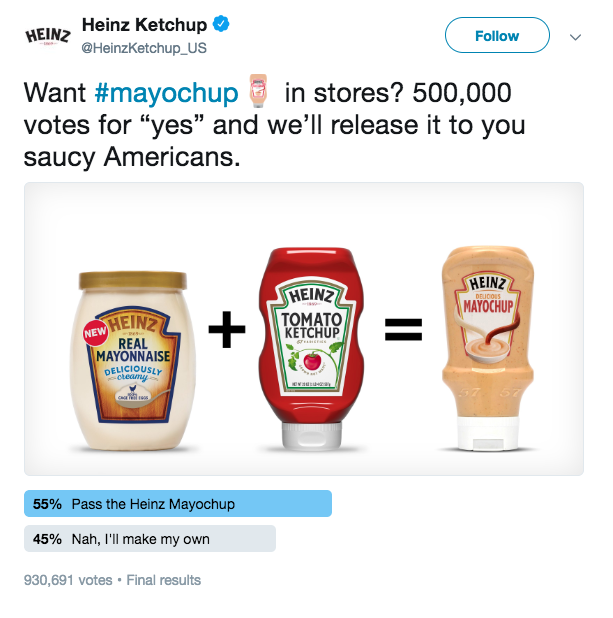 Not only is this an inexpensive way to do a focus group with the entire internet, this single tweet garnered 1 billion impressions in 48 hours. Not to mention all the free PR that is still streaming in as Heinz prepares to launch in select cities.

In one of 2018’s biggest (and most ridiculed) plot twists, IHOP announced that it was changing its name to IHOB.

In a brilliant move to garner the internet’s intrigue, it not only dropped this name change bomb, but made people guess for eight days as to what the B could bossibly mean. 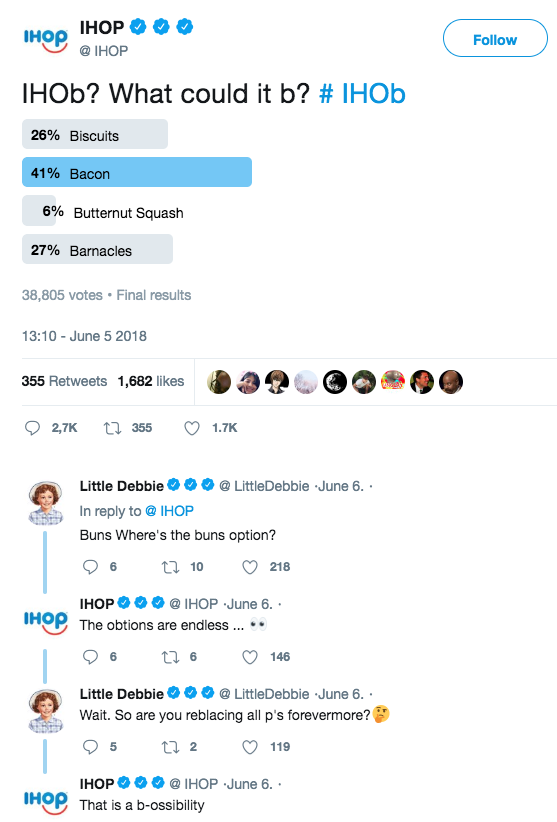 On June 11, after much hype and many nicknames, the world learned that it stood for International. House. Of. Burgers.

Nope, Dan, this was not a joke. They really went and did the thing. 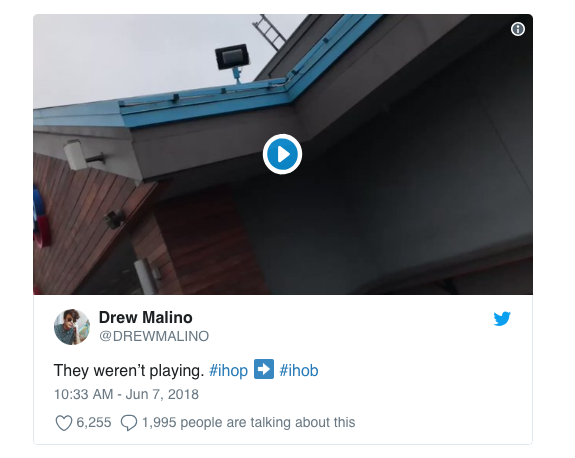 Many believed that this oddball marketing ploy could never work, and plenty of people, brands and marketers ridiculed the stunt.

But IHOB worked! Burger sales quadrupled after IHOP became IHOB, and over 100 brands and celebrities joined in on the conversation, earning IHOP a total of 2.1 million social media conversations in the first 10 days from the launch of the campaign. And just in case you were worried that they got rid of pancakes, they went back to their roots once their point was made. 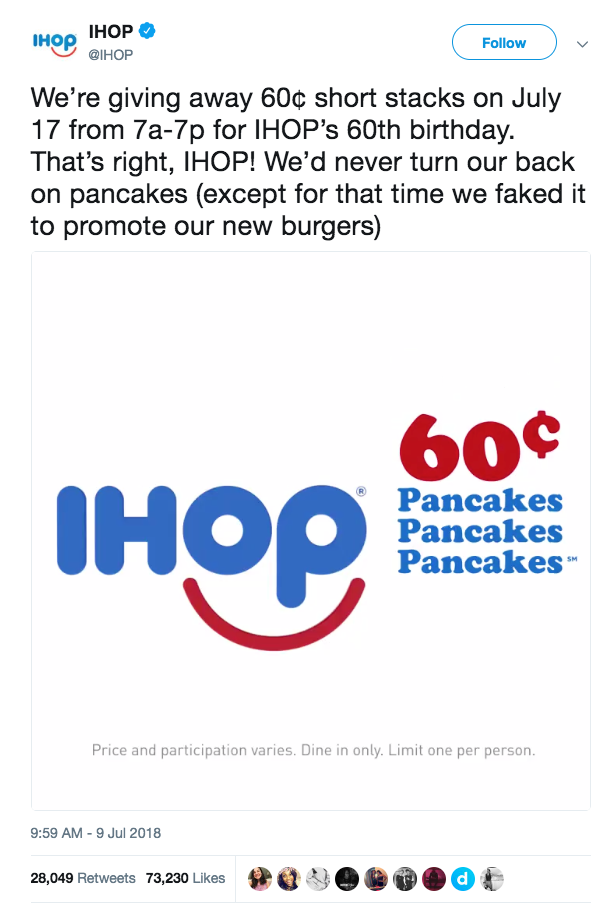 Okay So I Should Launch My Twitter Profile Now?

Not so fast. Clearly, there are several people actively using Twitter, and plenty of brands engaging with them. And with recent bot purges and inactive account deletions, Twitter is pushing hard to make sure that their once spammy reputation is repudiated. With all of this good news, you may be thinking you’re ready to take your brand live and start raking in the retweets. But while many B2C and even B2B brands have seen success on the platform, not everyone needs to be on there.

Do You Have the Time?

If you don’t have the time to actually connect with users and practice great community management, Twitter may not be the place for you. Make sure you have a strategy to reach your target audience and the time to stick with it.  Consistency and value are key, and if you can’t provide both, then you won’t see the results.

If you don’t have a steady stream of content that’s funny, thought-provoking or otherwise valuable, Twitter might be a swing and miss. Many companies think it’s a great idea to get Twitter to post news, but then find they only have a few announcements every year. Some companies sign up only to spam users with requests to buy their products or download their podcasts and wind up with no followers and little engagement. These types of accounts don’t provide the fast-paced value that Twitter users have come to expect, leaving them by the wayside to more active user-focused accounts.

Is the Audience There?

If you’re looking and looking for your audience and just can’t seem to find more than five users on Twitter, you may be wasting your time. Niche audiences are great for engagement since not everyone will want to connect with every brand, but if the user base is hard to find even with relevant hashtags and Twitter chats, it will be difficult to grow your following and engagement.

Twitter is the perfect example of the evolution of social media platforms and how they can pivot to find their niche audience.

As we progress further into a digital world, it’s good to remember that all “old” technology isn’t necessary obsolete – it has an ebb and flow that moves with the times. The QR code had its heyday and died a much-needed death, but came back in ways that were actually useful and provided value to users. As Facebook loses younger people and privacy-minded individuals, they’re also exploring many, many options to diversify their offerings. They could come back through their upcoming dating service, their connected video platforms or their blue-collar LinkedIn alternative. LinkedIn itself has seen a huge comeback, a Cinderella story where professionals now post about their personal journeys through corporate America and entrepreneurship and connect to ideate and share tips and advice. Three years ago, LinkedIn was a dying platform that seemed obsolete, and now you don’t even think of going into the job market without having a professional profile with at least a Microsoft Word endorsement.

So when considering what social media platforms you or your brand should be in, keep Twitter in mind. If you can keep a consistent stream of content that is useful, funny or relevant, you could find yourself turning interested bystanders into raving fans.