Can Brands Be Activists, Too? We Think Yes 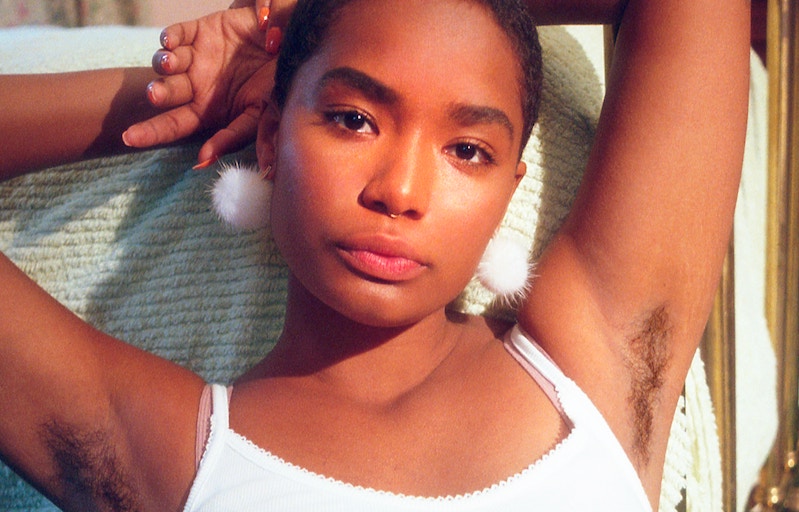 A few weeks ago, a few of my closest friends and I were sitting on the back porch of my friend’s lake house. We were chatting and sipping White Claw classy beverages when the topic of body hair came up. Someone asked the guys in the group if they’d feel weird dating a woman who chose not to shave. The general consensus was that yeah, it’d be a little weird.

Over the next few days, I thought a lot about that conversation. I examined my own internalized sexism. I boiled my feelings down to a few thoughts:

I, myself, have a complicated relationship with depilation. You see, I’m a self-proclaimed feminist-in-progress, à la Jameela Jamil. Over the years, I’ve read many articles about how “real feminists” don’t remove their hair because it’s just conforming to oppressive and outdated Eurocentric beauty standards and/or catering to the male gaze.

However, I’ve noticed that whenever I ask the women in my life, they often tell me that they like shaving. That there’s no better feeling than sliding into clean sheets with silky smooth legs.

I, too, love that feeling. But I also love the feeling of my arms sliding through those same clean sheets. Arms that still sport all the natural hair my momma gave me.

So do I prefer shmexy, freshly shaved legs to the stubbly bullshit that happens when I’ve gone a few days sans razor? Obviously. But what I’d prefer even more is if I’d never been conditioned to shave that hair in the first place. Because then it’d still be soft, flexible and would never cross my mind when I was climbing into bed. I wouldn’t have to try to convince myself that I’m “shaving for myself” when I know full well that if leg hair was as commonplace as arm hair in the U.S., I’d be a wealthier, fuzzier, more confident woman with a third degree because of all the extra time I’d have had on my hands.

Yet, I choose to shave. I do this because at the end of the day, you have to pick your battles and there’s so much wickedness in the world that this one just didn’t make the cut. It’s exhausting to keep up with all the creative ways humans have devised to fork one another over.

Not shaving in the U.S. in 2019 would require me to constantly process other people’s disapproval and outright disgust, while also battling my own internalized notions of “beauty” which is often conflated with worth.

So I spend precious time and money ridding my body of random patches of hair according to whatever standard our patriarchal society has deemed acceptable this year.

But despite where it may seem like I’m heading, this is not a blog about how marketers are or are not to blame for shaving. If you want a history of the pointless practice, Chelsie’s been there/done that. According to her, the marketing industry didn’t create society’s rule that women have to consent to light torture whenever they want to hit the beach. But even if that’s true, it sure as hell has capitalized on it. 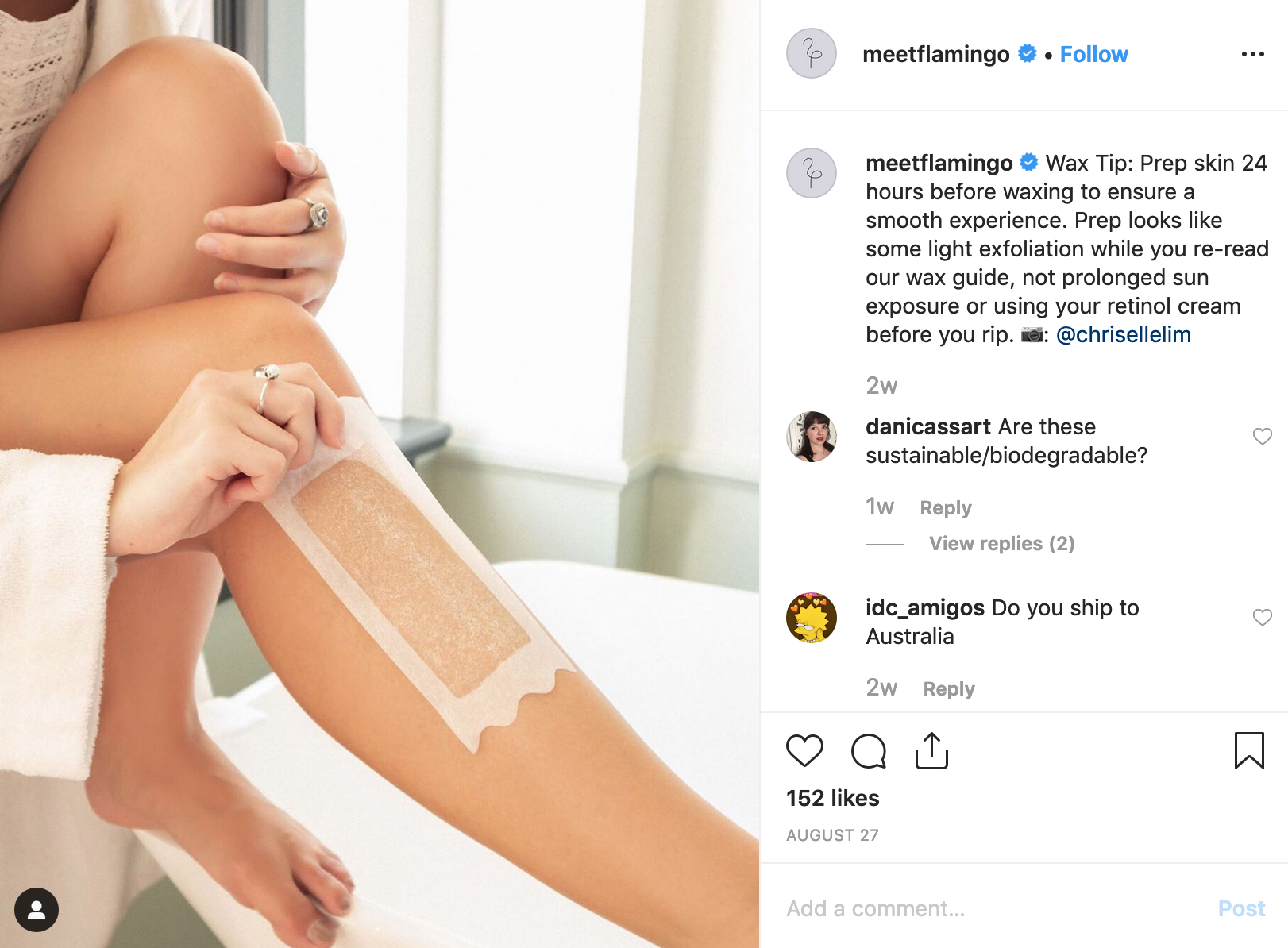 That’s exactly why one brand stood out to me as a bright light in the deep, dark abyss that is marketing women’s razors. Like a proper millenniaI, I was scrolling through Instagram one night before bed and saw an ad for Billie razors. That Billie ad was the first time I saw a razor ad featuring honest-to-God body hair. And, as you can see — that resonated with people. 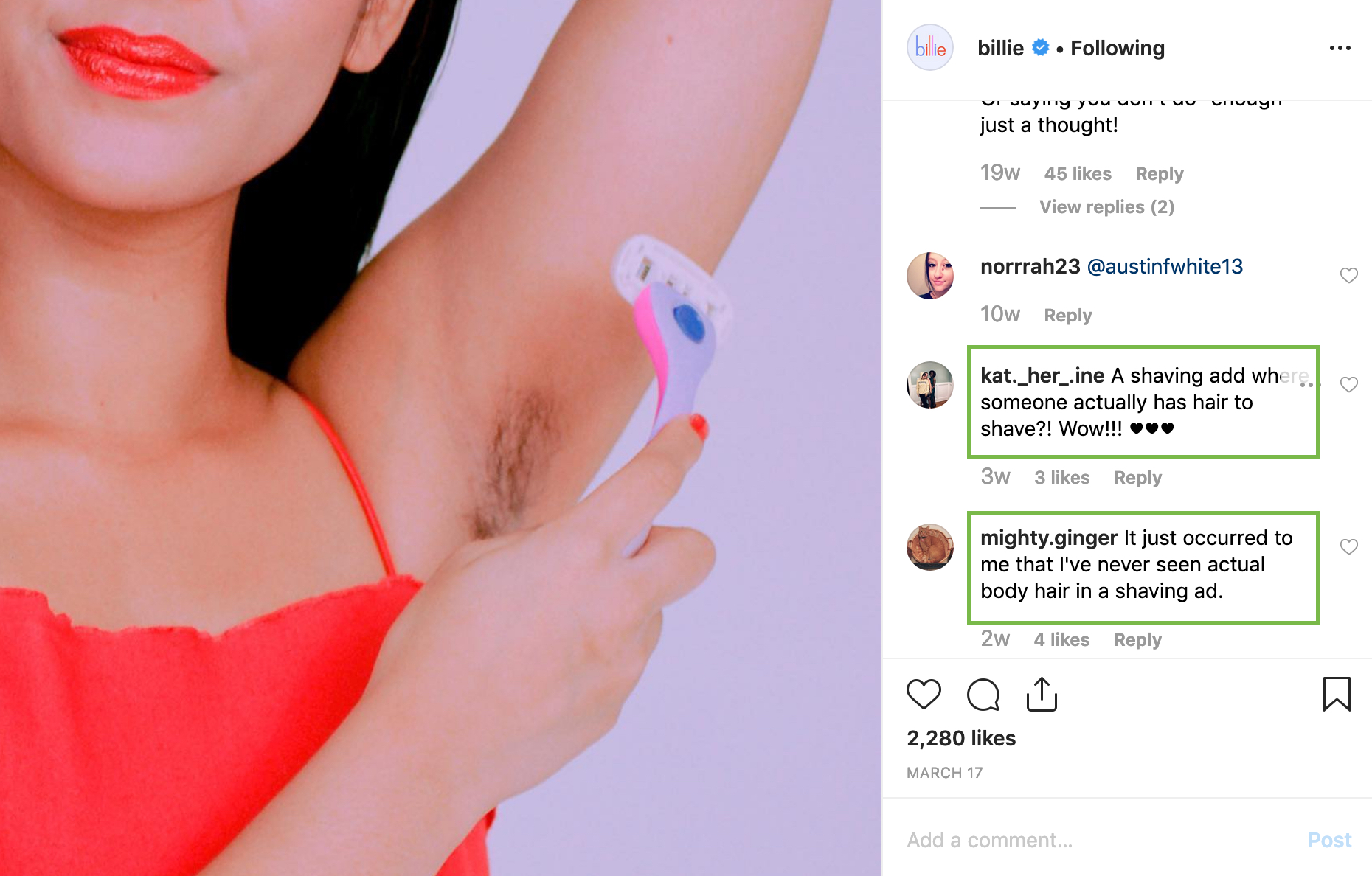 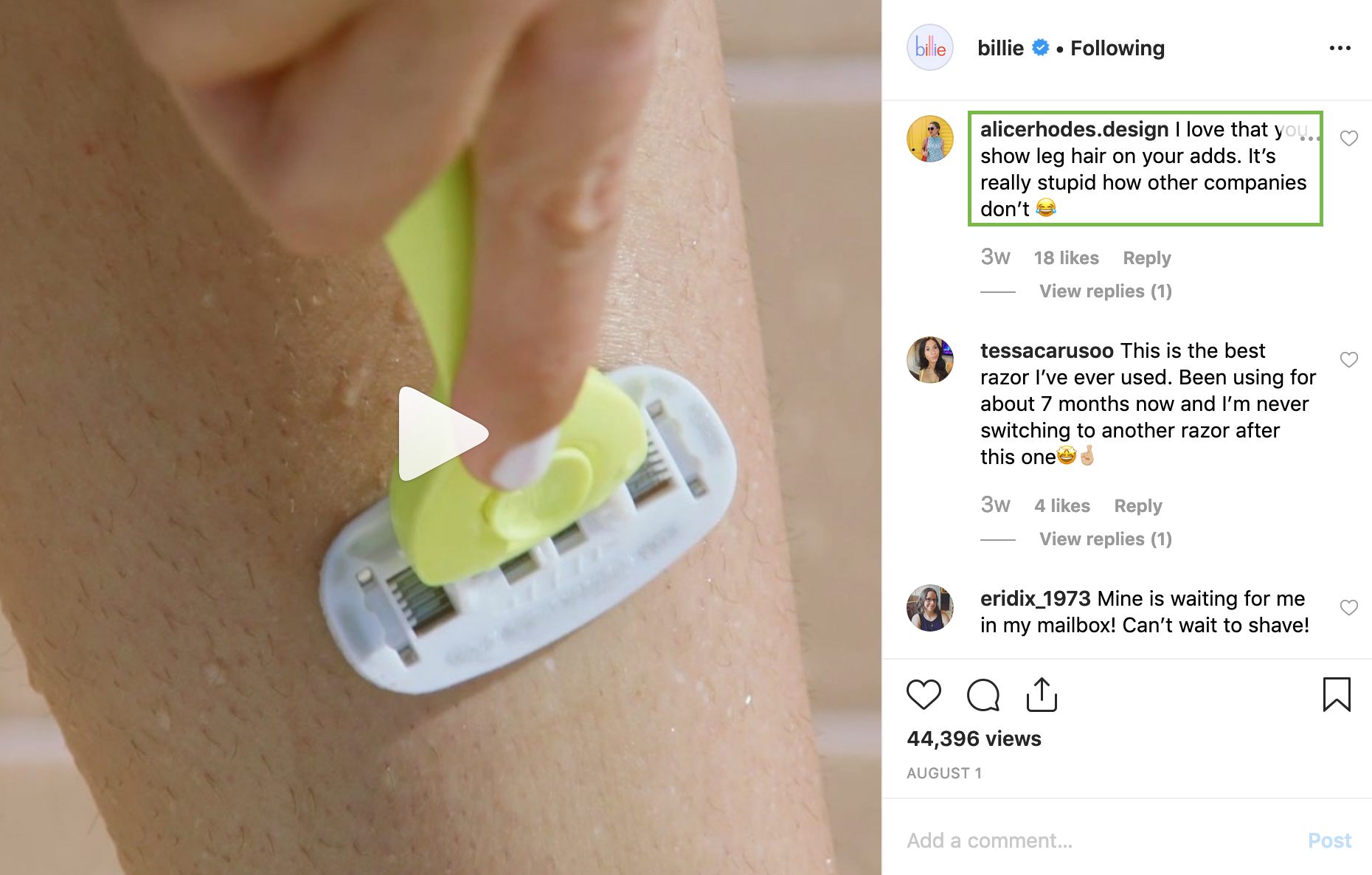 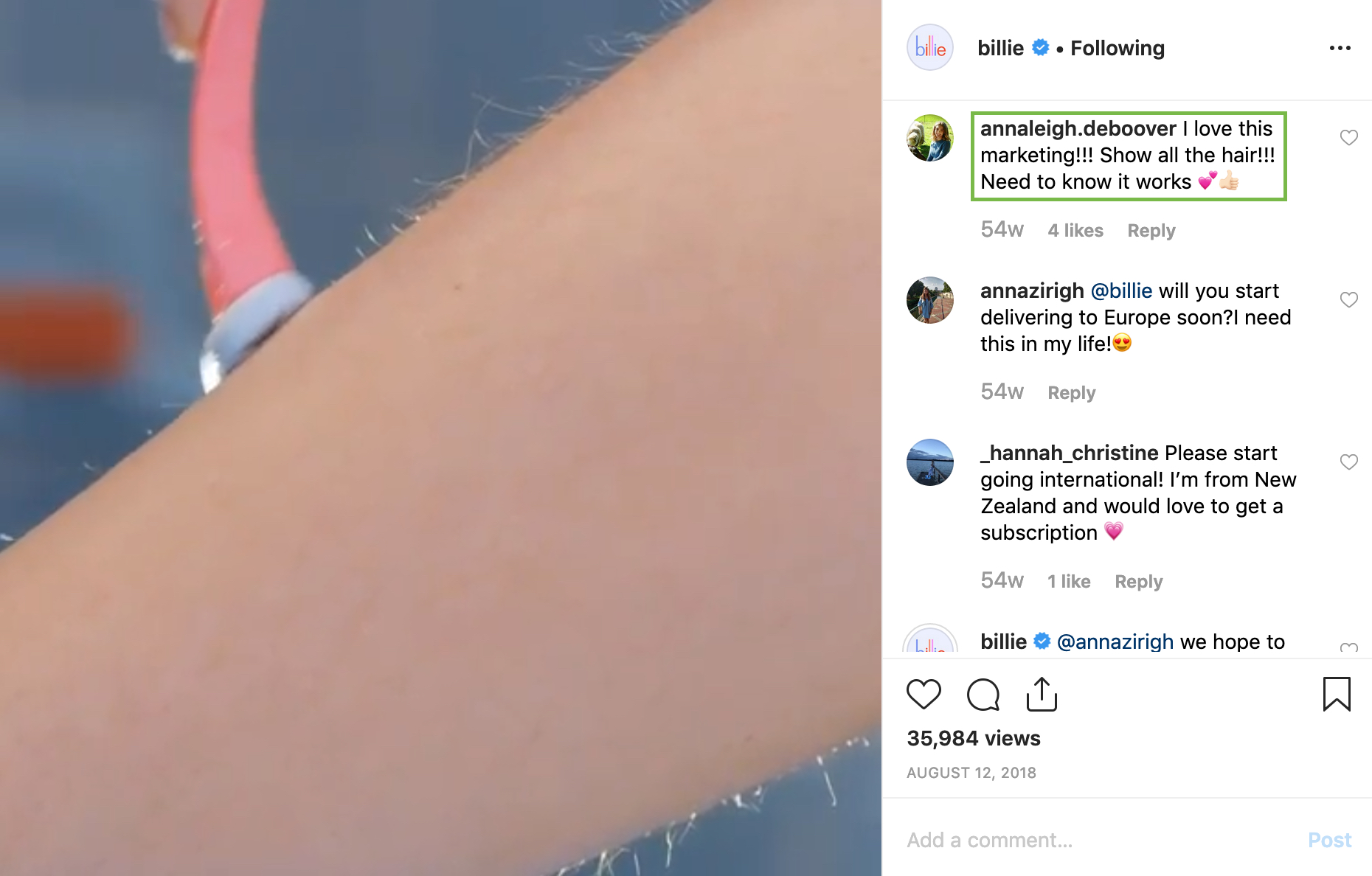 I’ve spent my whole life not having an informed standard for what was normal when it came to body hair. I never saw real bodies represented in media or ads, and the people around me didn’t really talk about it either. We don’t like to admit the lengths we go to to fit in. To achieve what we’re told is desirable. If I’ve learned anything, it’s that it’s way cooler to be effortlessly, naturally attractive. So a lot of us just grow up ignorant, self conscious and insecure. 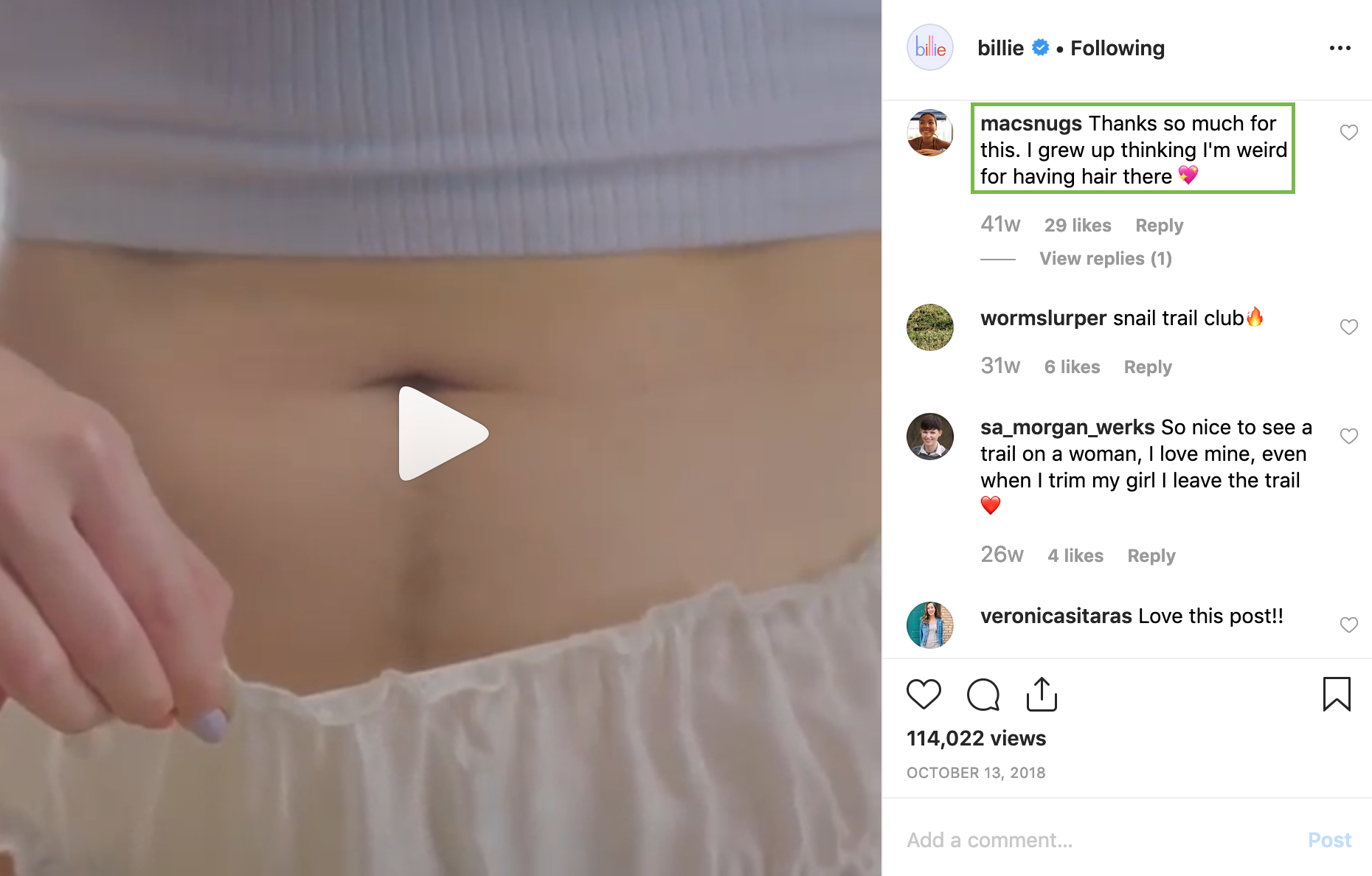 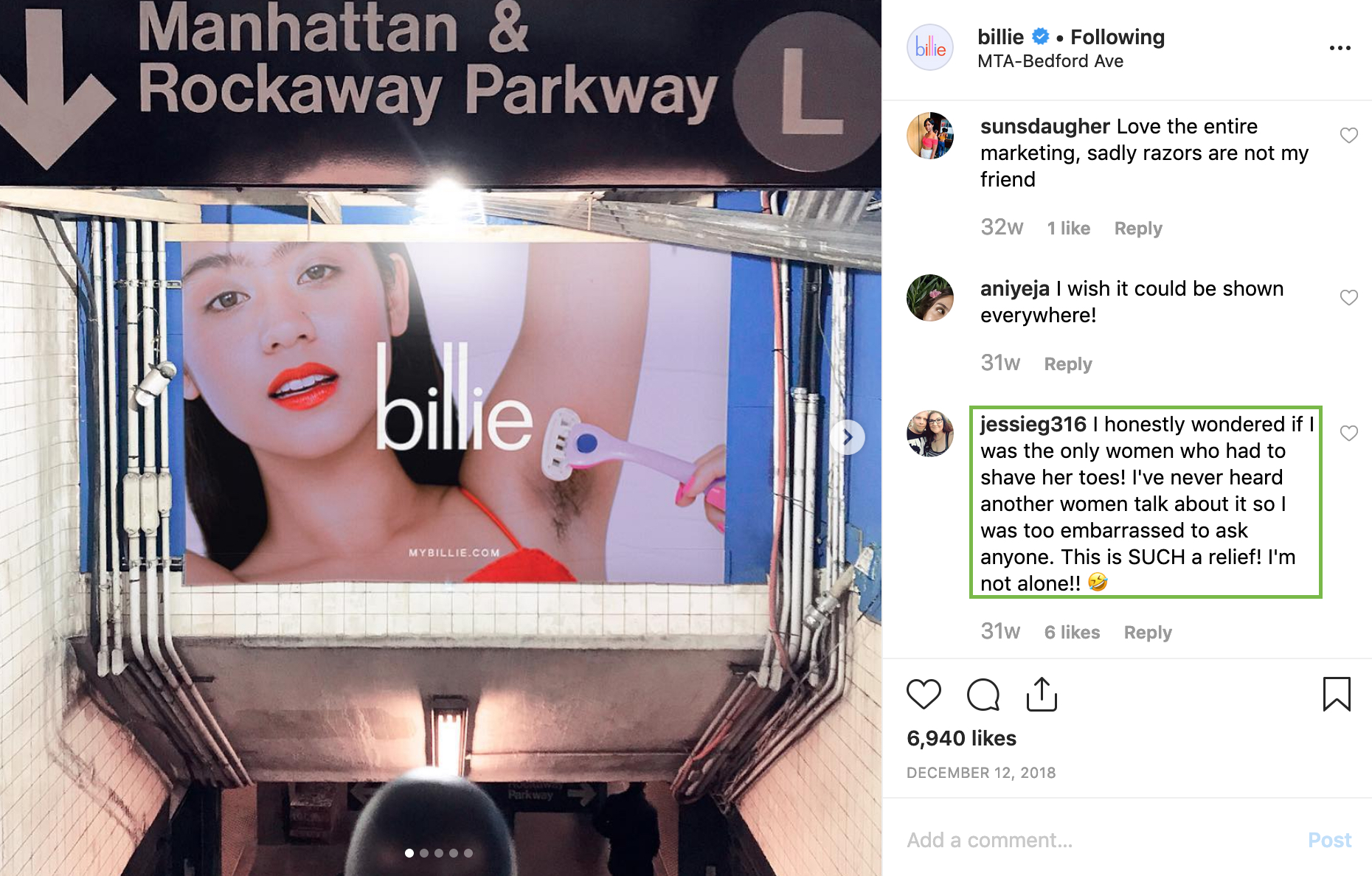 Maybe it’s me, maybe it’s bazillions of dollars and hours of zapping and plucking and pulling and trimming and grooming.

But Billie didn’t just stop at just showing body hair in their “before” pictures. They actually developed a campaign to normalize bushy bikini lines and piliferous pits. 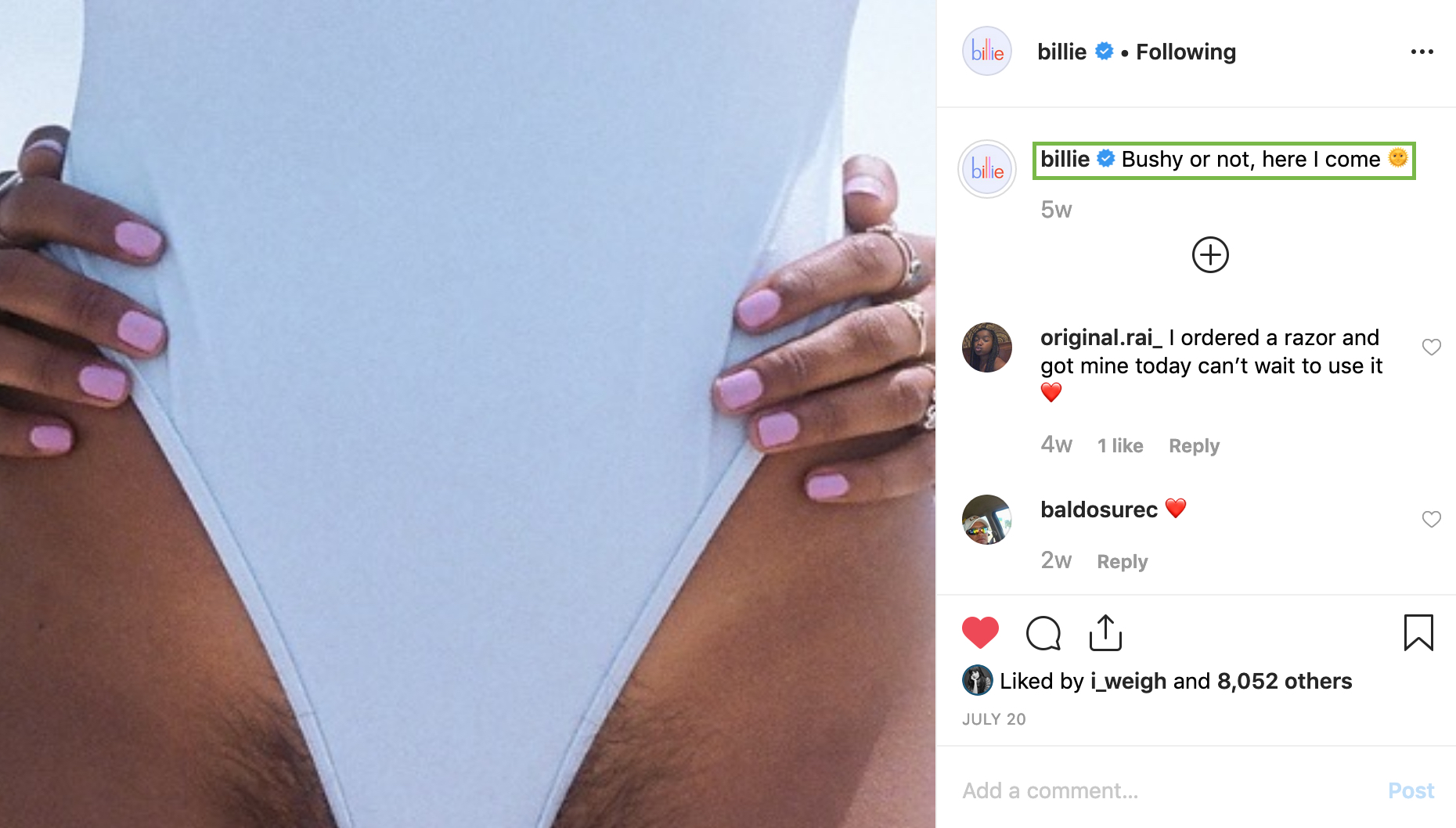 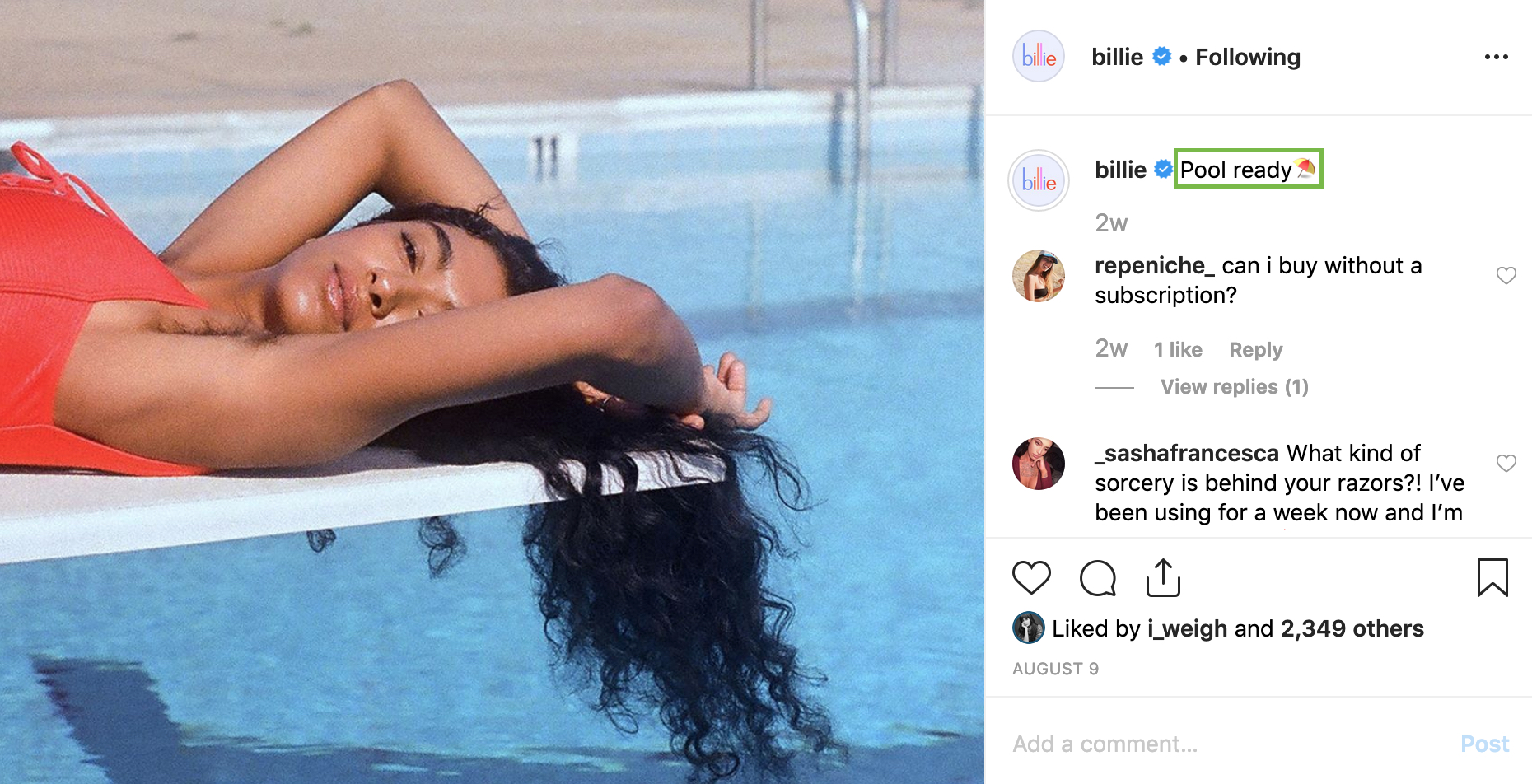 Obviously, some people could not wrap their heads around the idea. 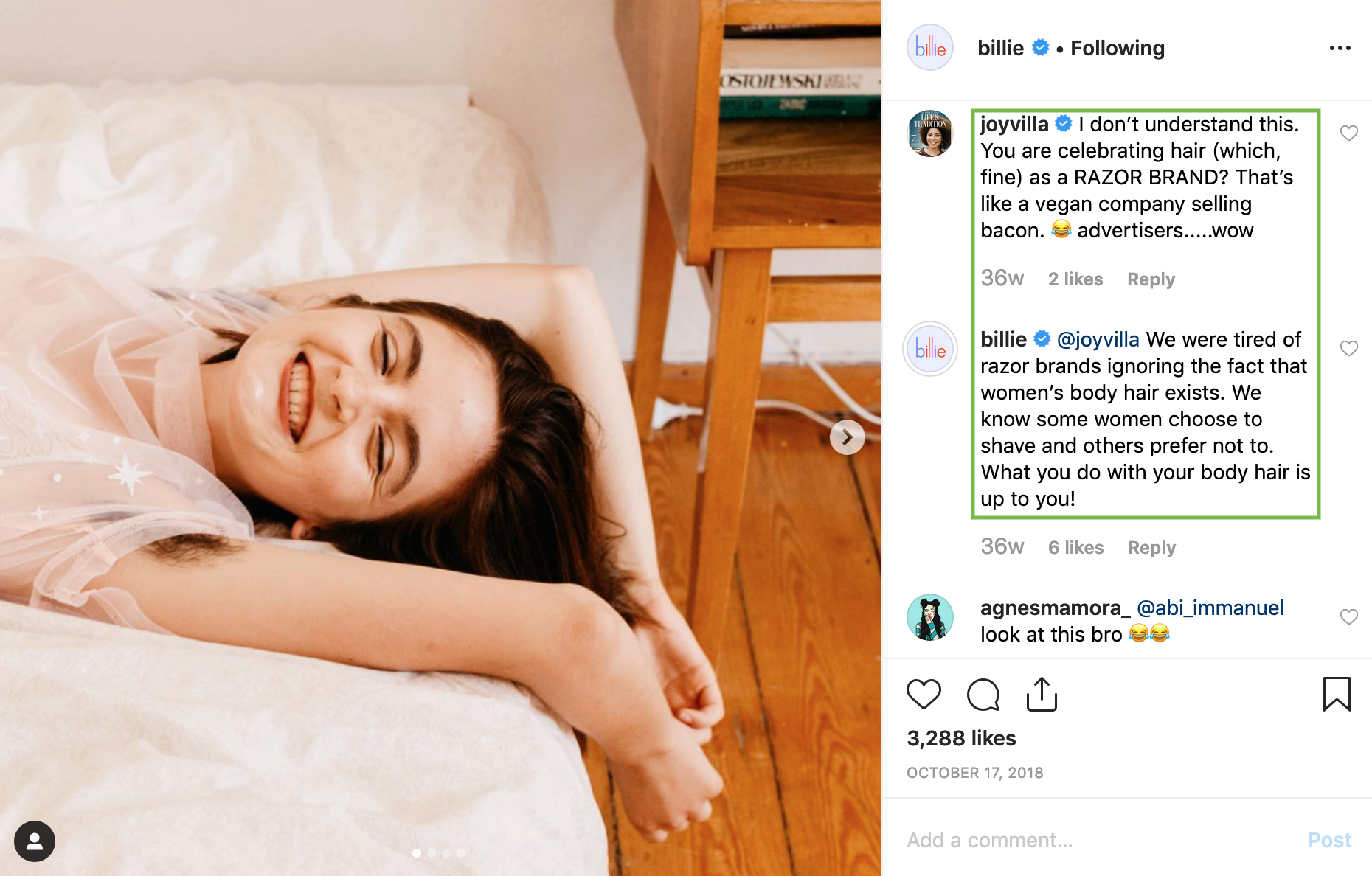 Some people don’t work in marketing.

@joyvilla, I guarantee you that Georgina Gooley, the ad exec-turned-cofounder of Billie, fully understands that by promoting body hair acceptance, she’s risking shrinking her market. But we’ve reached an era in which 78% of Americans believe it is no longer acceptable for companies to just make money;  they must also positively impact society. 77% percent say a brand's values and reputation are sometimes their sole purchase decision maker, and 64% will even switch, avoid or boycott a brand based on its stand  on societal issues.

So what Gooley is probably betting on is that Billie’s message of authenticity, acceptance and empowerment will resonate with women who have been underserved and treated as afterthoughts in the male-dominated shaving category. And even though the pie might be a little smaller, as consumers flock to this purpose-driven company, Billie’s slice will grow. 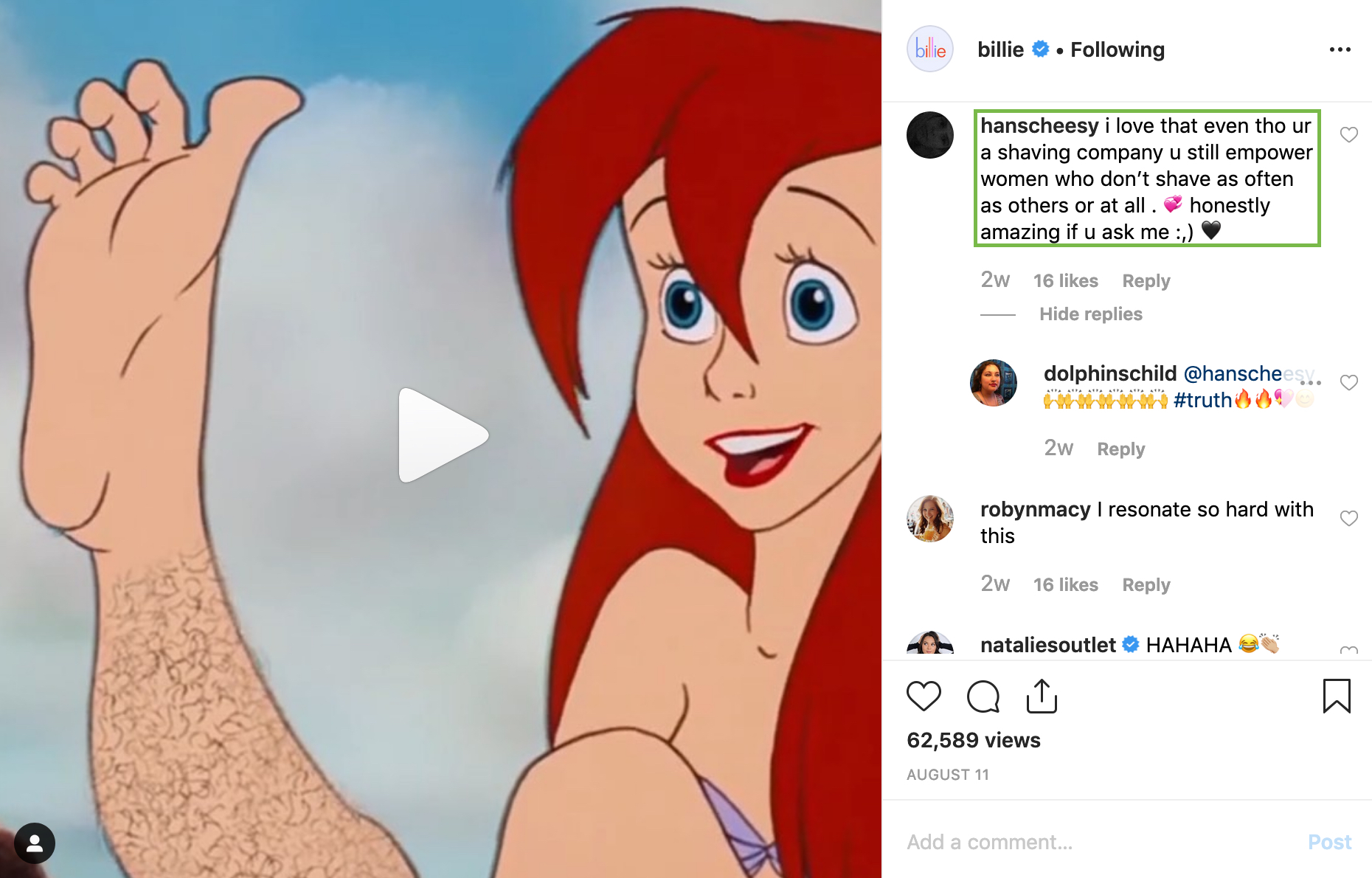 Plus, she gets to sleep at night, knowing she’s helping to make the world a little less of a judgmental hellscape! Radical, right? 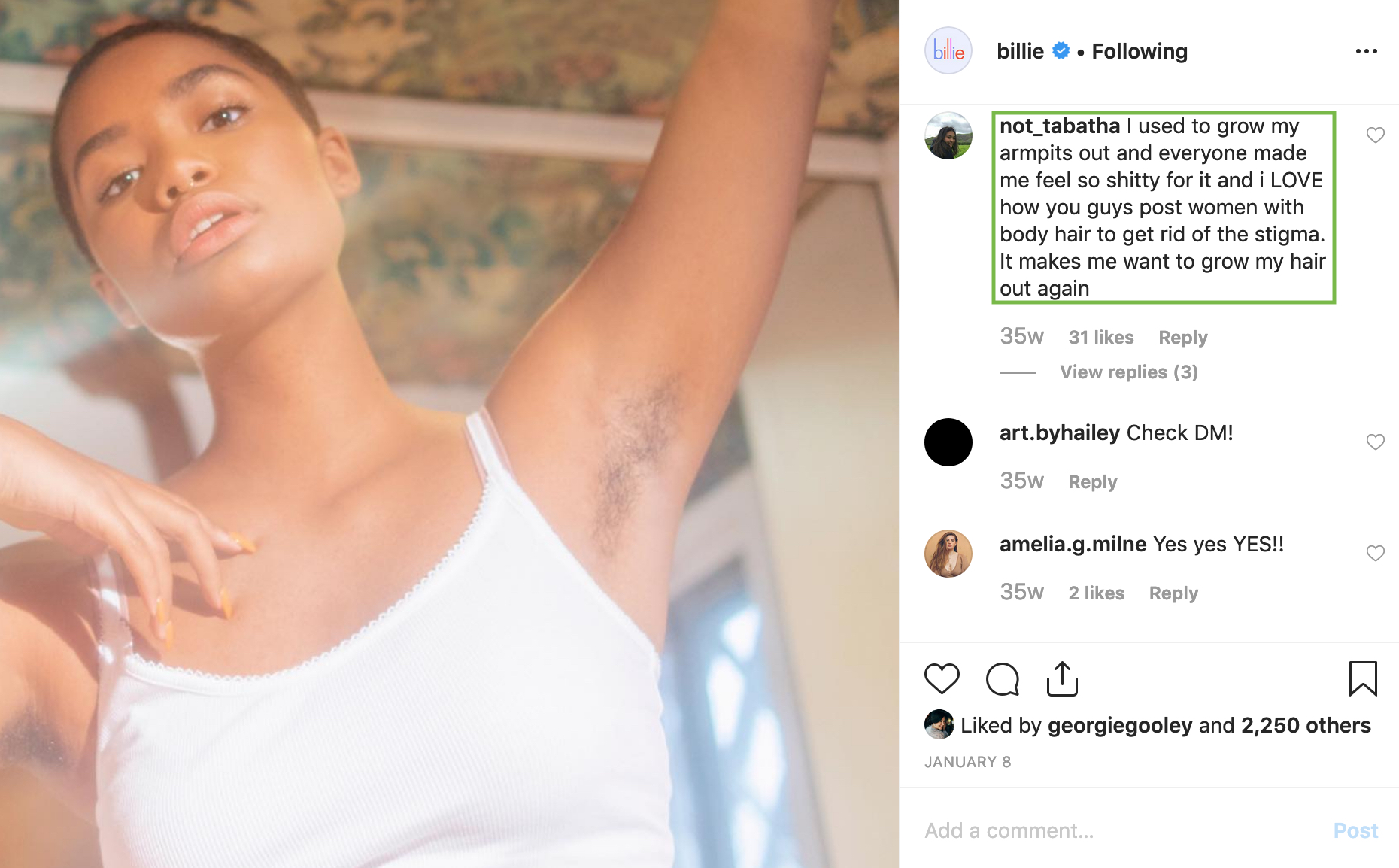 But brands beware: cause marketing isn’t for everyone. Amy Small, VP, Creative and Brand Strategy at Media Cause, emphasizes that cause marketing falls flat if you’re doing it to follow a trend instead of acting on your company’s values. Consumers know the difference.

From what I can tell, Billie backs up their feminist rhetoric. Dismantling the Pink Tax was one of Georgina Gooley and Jason Bravman’s primary reasons for starting Billie. They contribute 1% of all sales to organizations supporting women, like Every Mother Counts and Body Gossip. They also donated the body hair-positive images they’re using in their campaigns to the stock photo site Unsplash for free use by the public.

Billie, along with tons of other brands, is engaging in cause marketing in an authentic and honest way, and it’s working. I’ve talked them up to all my friends. I’ve shared their content. For heaven’s sake, I’m writing an entire blog post about them. And as soon as I’m done with my Dollar Shave cartridges, I’m switching to Billie.

Because to me, this isn’t just an ad. This is activism. This is my generation’s kind of CTA. 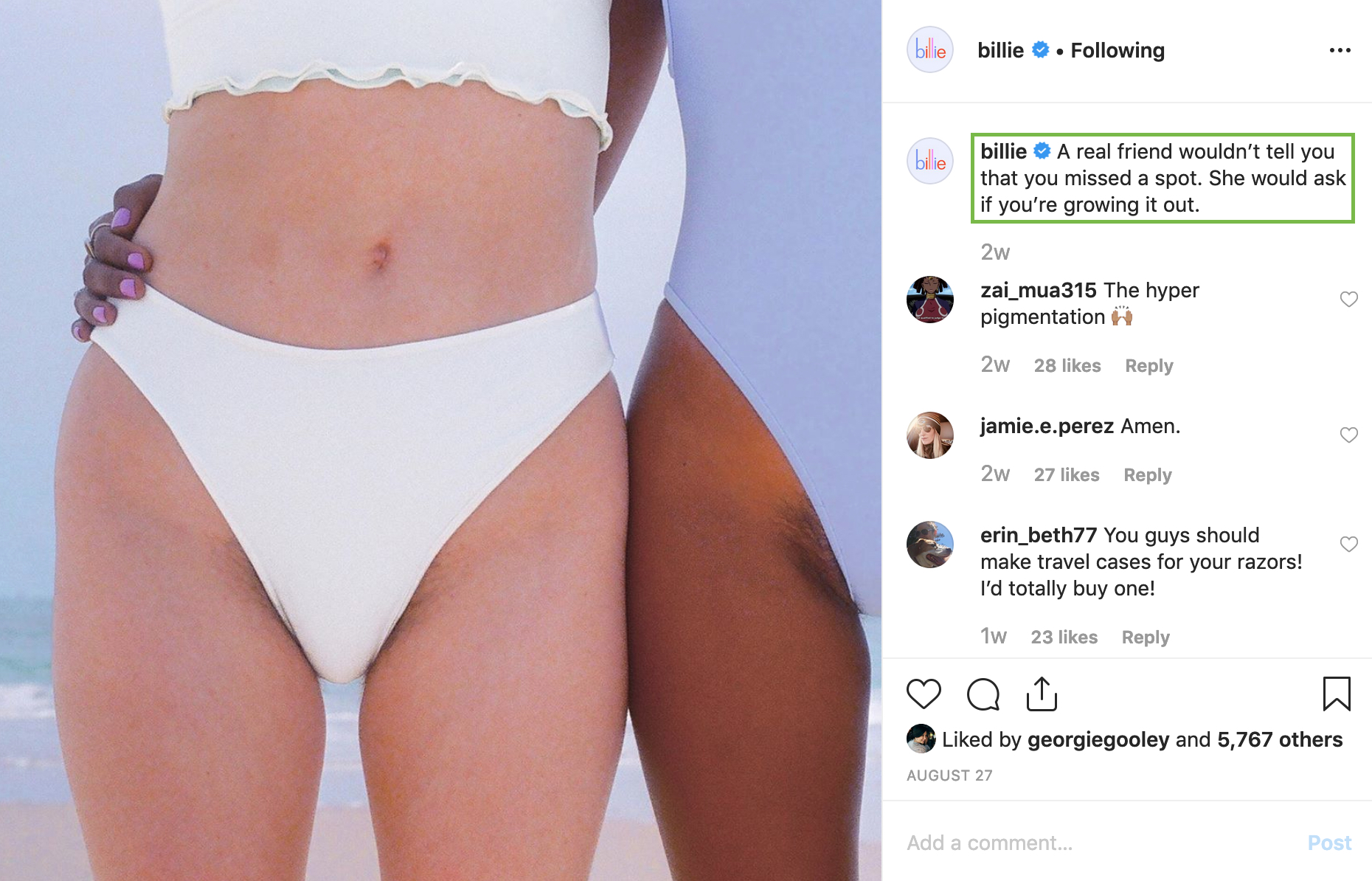