Why We Shave Our Legs: From Sex to Sexism 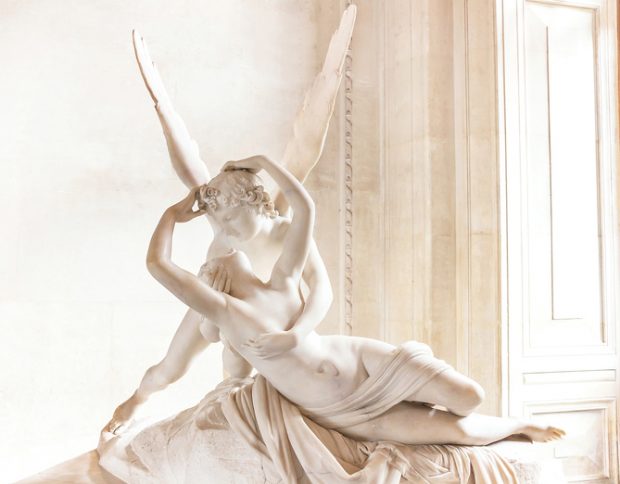 Many great things have come from the minds of advertisers. Father’s Day. The Egg McMuffin. Countless turns of phrase: “Always the bridesmaid, never the bride”; “When you got it, flaunt it”. Unfortunately, a lot of terrible things have come from advertisers too. Bic for Her pens. Dr. Pepper 10. Low-cal beer in special slim cans — designed for the dainty grip of the weaker sex, of course.

When it comes to sexist marketing ploys, our industry is historically guilty for creating some of the dumbest shit on Earth.

So, the question was asked the other day: did we make shaving a thing for women?

The obvious reason we shave is sex, right? I mean, hair is gross on women (unless it’s long and flowing from one’s head). But a little research will tell you that men really dgaf what we do with our leg hair, and they’re going to bone us anyway.

So how did hairlessness come to stand for beauty and sex appeal? Did we really brand bald as sexy in an effort to sell more razors, or is there another root behind our urge to cut, yank and pluck our God-given bristles?

The internet is rife with listicles about how the shaving, plucking, Nairing and waxing of women’s pits (and other parts) was borne of sexist marketing. They claim that these practices didn’t exist until marketers made them up in an attempt to make more sales.

Tbh, it sounds like something we might do. (And by “we,” I mean the lazy and shady advertising hacks that hide among us.) But when I read the headline “Women didn’t shave their armpits until Gillette told them they should,” I suspected this might not be entirely true.

First of all, women (and I like to think all people) are smart — too smart to let a few measly ads dictate their decisions. But secondly, I heard a myth in sixth grade that leg shaving came from Ancient Rome, when hairlessness was a sign of wealth. Why? Because so many people peed in Roman communal bathhouses, the acidity of the water ate all the rich ladies’ hair off.

So did hair removal begin as a marketing ploy? The truth is that there’s a long, long history behind women’s hair removal, and while marketing plays a role, for once, our industry might not be to blame.

The Rich and Lathery History of Women’s Hair Removal

When it comes to the time before selfies and ads, history is a little hazy. But there is one thing we know for sure: In the beginning, God said let there be hair. And there was hair. And God saw the hair and saw that it was good.

But then, people ruined it. 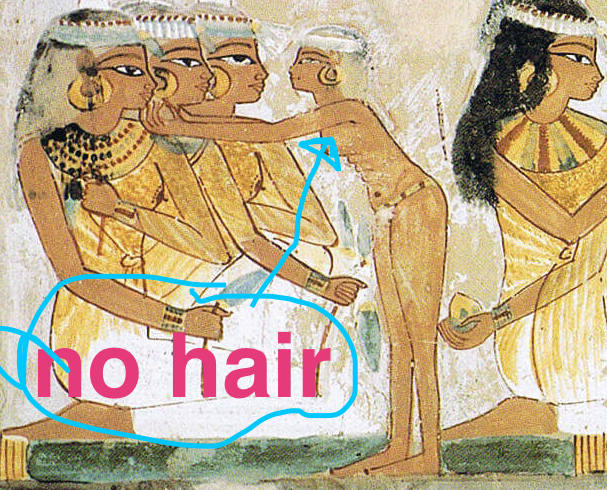 The consensus seems to be that ancient Egyptians started this sexist shit. Turns out when they weren’t building mysterious feats of mankind with 1,000-ton bricks, they were inventing nonsense beauty standards like hair removal. Women began removing their body hair — including their head hair — with all manner of torture tools, plucking it out with tweezers made of clam shells, scrubbing it off with pumice stones, striking it down with the world’s first copper razors and yanking it out with beeswax and cotton strips. But Egyptians also invented marshmallows, so they are forgiven.

The hairless trend continued into the Roman Empire, where hair removal was, in fact, a sign of wealth and cleanliness. But these crazy mofos took it one step further — they started removing their pubic hair, and with a sadistic-looking tool called the volsella, no less. They also used depilatory creams made with she-goat’s gall, powdered viper and bat’s blood — which, incidentally, are the same ingredients used to dispose of bodies in “Breaking Bad.” Greek society preferred their ladies hairless too — take a look at their bald and beautiful statues for proof. 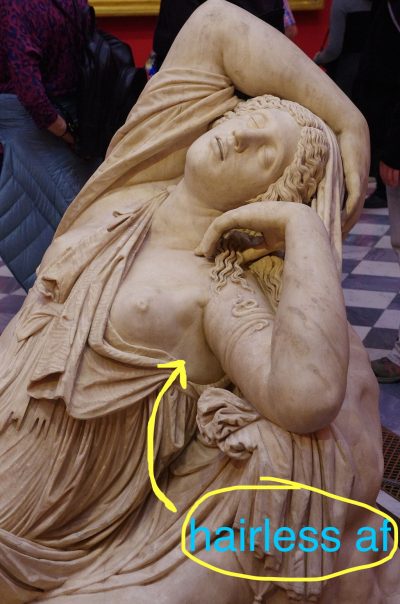 Unfortunately, non-Western regions like Africa, Australia and the Middle East are largely omitted from the canon of widely available hair-removal history and documentation. But we do know that, in the East, eyebrow threading was already a thing (though it’s unknown whether this practice began in Asia or in India). Meanwhile, in Elizabethan-era Britain, wealthy women often removed their eyebrows completely and plucked their hairlines to create the illusion of a taller forehead.

After that, history starts to get hairy. Fast-forward to America in the early 1900s. It’s hard to know what women’s grooming habits were at the time. Not only was clothing extremely conservative, covering most of the female body, but so was print media, where scandalous topics such as women’s leg hair were best left behind closed doors. In fact, when Harper’s Bazaar published what is believed to be the very first anti-pit hair campaign in 1915, the word “underarm” itself was shocking. That’s because up until then, hair removal ads were aimed largely toward the facial and neck areas, ignoring more sensitive regions entirely. By the 1920s, shaving one’s legs and underarms was common practice. What caused the change? 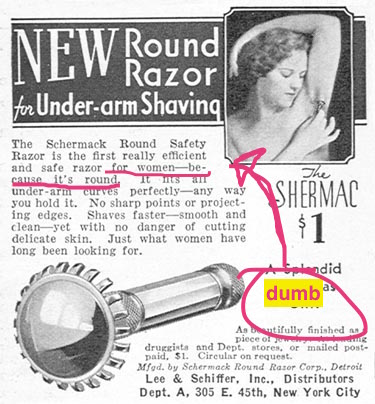 A 1933 advertisement demonstrating Bic for Her levels of dumb.

Will the Real Cause of Pit Shaving Please Stand Up?

Many will say that advertising pressured women to start shaving their legs and armpits. That idea goes back to a single academic paper, written by Christina Hope in 1982. She’s the default expert on women’s body hair, if only because she’s the only person who’s ever researched it. Why? Probably because it’s so damn hard to research. Photography was in its early stages, and the written word omitted scandalous topics like personal hygiene. Hope could only turn to print media and advertisements to create her history of hair, and it was during the ’20s when the first ads for hair removal emerged. But simply because print media is our most accessible and possibly only visual history of hair-removal practices in America, doesn’t mean advertisements caused the shaving sensation.

It’s more likely that the rise of flapper fashion caused the revolution. Hemlines were rising and sleeveless dresses were in vogue — and it’s no coincidence that these looks are reminiscent of the garb worn by those infamous ancient pluckers, the Greeks and Romans. Not only a was fashion a way for ladies to finally show off their stuff, but looser forms and less fabric also gave freedom of movement to dance carefree (and hair-free).

But beyond that is a more important reason why marketing didn’t spawn our hairless culture. Many people think that advertisers are grand puppet masters who use brainwashing, manipulation and subliminal messaging to sell. If that were true, our jobs would be a hell of a lot easier (and more sinister). But the truth is that attitudes toward women’s body hair must have been predisposed to hairlessness. Hairlessness equals youth, and youth equals beauty.

We'll never know who picked up the first clam shell and said, “Hey, I’m going to pull out some of my own hair today.” And we’ll never know exactly why they thought that was a good idea. But we can only assume that these ideals of female beauty already existed, because much like sauna pants and Crystal Pepsi, if no one wants it, it just won’t sell.

I’m also not saying women should or shouldn’t shave their pits, legs or nether-regions. After all, the biggest feminist middle finger you could ever give is doing whatever you damn well please.

All I’m saying is that, in the long history of shitty things that we advertisers have done, making you shave your legs is not one of them.