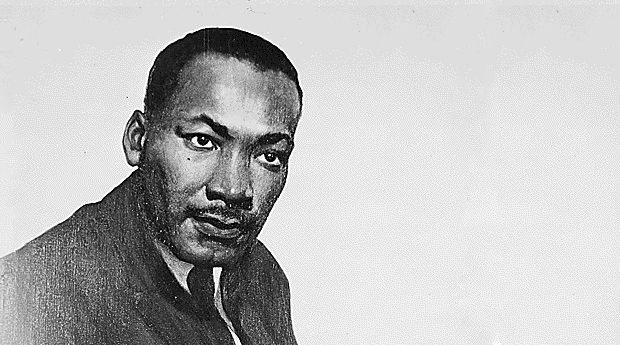 Inspired by the work of Ghandi, Martin Luther King, Jr. saw the answer to the ills of his fellow African-Americans not in force, but in love. Preaching non-violent resistance against a backdrop of extreme hate and violence, King influenced our country to guarantee the rights of all citizens.

In light of today’s issues, it is mind-boggling that many choose not to acknowledge his contribution to the welfare of our country. It took almost 20 years for all 50 states to observe the federal holiday. Even still, there are companies that refuse to celebrate his work.

And yes, we’re looking at you, corporate America.

Dr. King’s life work and ultimate sacrifice leading the civil rights movement has greatly influenced not only the rights of African-Americans, but women and other marginalized groups as well. As one of the greatest orators in history, he exposed truths about our country that many would rather not face, but in a way that made them empathetically take notice.

King marched with other African-Americans and worked hand-in-hand with people of all races, nationalities, sexual orientations and religions, recognizing our mutual need for love, respect and, of course, the hope of achieving the American Dream. His legacy has been recognized as part of our national heritage, reflecting America’s best ideals in justice, equality, democracy and human rights. If that doesn’t earn you the respect of your fellow man, I don’t know what will.

What it says about your company culture and priorities

At a former company, I questioned my boss as to why we didn’t observe the Martin Luther King Jr. holiday. We were a large firm that emphasized diversity, our staff was 60 percent African-American, and we were located in Atlanta—the birthplace of MLK, the location of the King Monument, Ebenezer Church where he preached and Morehouse College where he attended school. His legacy could not be denied nor ignored. Shockingly, my boss wouldn't even hear me out. He said, of his employees:

"They have two floating holidays. They can take the day off if they want."

What? Really? I was stunned.

This same mentality can be observed in many corporate offices across the country. Despite all the talk of multiculturalism and tolerance, if you refuse to observe a holiday that acknowledges the man who, in no small part, has inspired your internal policies and culture—in addition to being one of the greatest Americans in history, among the great leaders, thinkers and heroes—then diversity is obviously not a priority at your company. It could be considered business as usual at best or passive racism at worst.

Is there really a good reason not to take off the day?

What is more mind-boggling are the reasons why companies refuse to celebrate the holiday. It makes sense that healthcare professionals continue caring for the sick and for law enforcement to keep our streets safe. And, let’s face it, retail organizations don’t even close for Thanksgiving anymore (but that’s another argument).

So, what will you be doing on Monday?

It’s a sad state of events that the only place you can truly escape the legacy of Dr. Martin Luther King, Jr. is  in the workplaces of Americans on the day we're supposed to be celebrating it. Places where his efforts to improve the quality of life of his fellow Americans has opened doors of opportunity for all people, and has made our country a better place.

Only around 30 percent of all companies in the country observe Martin Luther King Day. By not recognizing the holiday, companies are not only sending a message that their diversity programs are just lip service, but they're are also missing an opportunity to practice goodwill. Companies such as Comcast, in addition to giving their employees the day off, also encourage their staff to use the day to volunteer at their favorite charities or for a good cause.

This year marks the 50th anniversary of Dr. King's monumental "I Have a Dream" speech. To the 70 percent of companies that don't honor the  King Holiday, I challenge you to watch this video, then justify your decision.

Whether you end up working, have the day off or are performing a day of service, I encourage everyone to honor the man and the message.

As for the 70 percent of firms that don't honor MLK Day, I have a simple message for you.  Shame on you.

We are always open. Nobody cares about this in rural Ohio.

I'm not going to rehearse the shame that is being stated by you racist bigots in this country. But I will say MLK should be as important as any other holidays. So one says it's not too be apart of the work place, I say then neither should these pagan holidays now being observed. Ijs.. MLK day and any other holiday should be a part of our lives and neither ignored....

You had me until you stated "It could be considered business as usual at best or passive racism at worst." Really??? There is no room for politics in the workplace. Forget why you are there? I promise you, if you do forget, there will be someone who wants your job who won't. You aren't there to honor YOUR human-ness. You are there to do your job!

I am both ashamed and disappointed that my employer will not obeserve the MLK Holiday tomorrow. The decision not to do so was made prior to my employment with the company, so I will comply this year. Thanks for a great discussion of what it means not to observe the hard-won holiday for this great American leader. I am inspired and encouraged to push for proper observance and acknowledgement of the holiday by our organization next year.

Sergie that was an extremely racist comment about the fried chicken.

Bella: Kennedy does get a holiday and it is President's day since he was a president.

My company could certainly afford to give the day off, but they are a cheap assed accounting firm and it would take a minor miracle. We don't get presidents day off either. When I go in today, I will do as little work as possible, take a two hour lunch and leave early. Screw them and their corporate profits.

I'm working twice as hard but, I will have some fried chicken for dinner so that evens out.

Our President, John Fitzgerald Kennedy was assinated and I believe he did a lot for our country along with supporting the black community. So, why no holiday for him?

"me" (person above who said he didn't do shit for you) that is fine, just make sure you don't observe any other day, because president's day, labor day, veteran's day, independence day, what do what any of these stand for in your book? What have they done for you lately?

Sad. I wholeheartedly agree with this article too long have I worked at companies who do not celebrate it, my company recently implemented the observance of this day starting this year as well as veteran's day which they didn't observe either, these were at the expense of getting rid of another holiday observance, and I am totally fine with that.

I own a company and employ 250 people. No way would I ever give "MLK" day off. MLK didn't do shit to help me, or my employees plus there are already way too many paid holidays already. Hard work is what matters, not time off to pay respect to some "icon" that isn't.

Brian - Thanks for the response. I think the notion of hypocrisy is relevant here, and maybe I just wasn't getting that in my read of the article. I agree that if a company shuts down for every federal holiday except MLK day, they are making a pretty big statement about themselves. Luckily, that does not describe my company. I should also add that we don't have "PTO" or "vacation days," either, so any employee who wished to dedicate today to an observance of the holiday would be free to do so with no repercussions.

Anyway, thanks for engaging my mind on this topic today. It was very timely, and in a way, my conversations here have been a pretty good observance of the day for me.

Britt - thank you for the compliment.

Ryan - thanks for your comments and congrats on running a successful business. The big question a firm needs to ask is if it can pass the man in the mirror test so to speak. If a business takes off all of the other national holidays, but doesn't observe MLK day, then that says a lot about the company character - and it's not good. Each business has the right to make its own policies which best serve their business model and audience. However, I wrote this post because studies show there is a statistically demonstrate-able hypocrisy by many firms, and in my humble opinion - it's shameful. Not all firms fall into this category, but too many do.

I'd just like to say two things: First, that I completely agree with everything you've said here as to why it is a holiday we should be celebrating. Dr. King was a great man with a legacy we should all keep close to our hearts and minds, and this holiday is just one way to honor his memory.

Now, that said, here is my second thought: You're painting with some really broad strokes here. As the owner of one of the 70 percent of companies that are working today, I am intrigued that, in your mind, it must be a matter of sheer disrespect that we are working. I run a tiny little startup that just took two weeks of paid vacation off for the holidays. I am insanely lucky to have so much work right now that my company simply can't afford to take another day off so soon. At a time when the economy is slowly starting to sputter back to life, I refuse to believe that the ONLY way to honor Dr. King is to take a day off from work. Rather, I'd offer the idea that taking some time to reflect on his work and letting that reflection affect the way we carry ourselves day-to-day is an equally viable memorial. I seem to remember that it is his own wife who has long spoken out against giving school children the day off, that education is important, that Dr. King would not have wanted schools to shut down in his name.

At the end of the day, my staff and I can't afford not to work today. If that makes us worthy of shame, so be it. I'd just like to challenge that notion by arguing that there are likely many companies in that 70 percent that have very good reasons for working, and that in our work, we are still able to honor Dr. King.

Thanks for the article!