What Defines a Hero 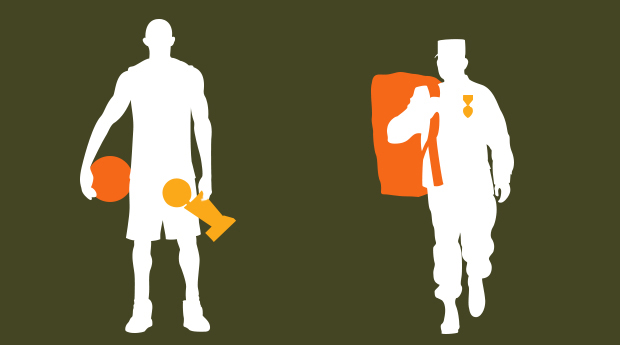 Michael Jordan once scored 63 points in a double overtime playoff game against a 1986 Boston Celtics team that started Larry Bird and three other Hall of Famers, and for that he was considered a hero. Without a doubt, Jordan and all the other greats exhibit qualities that we associate with heroes: superhuman physical abilities, a Quaker-like work ethic, an unquenchable thirst for victory.

For many, this is the definition of a hero. It’s the reason kids have posters of athletes in their room and the reason Dwight Howard puts on a Superman cape at dunk contests. However, these are not the qualities that made Superman a hero, they made him a fictional superhero.

This Veterans Day, let’s contemplate the things that make a person an actual hero and redefine the term.

Heroes are courageous. They answer the call of duty and put themselves in harm’s way for the sake of others. No one deserves the sacrifice heroes make; it is a gift they give to the people they fight for.

I never served in the military, and that was the gift given to me by my father and both of my grandfathers who did.

Heroes are men like Sergeant First Class Leroy Petry, who, while shot through both legs, threw an enemy grenade back, potentially saving the lives of two other men while losing his hand. His actions in Afghanistan led him to become only the second living man to receive the Medal of Honor since the Vietnam War.

There are also men like Sergeant First Class Paul Ray Smith, who was killed in the line of duty in Iraq when suppressing enemy troops while a group of 100 wounded were being carried out. His valorous actions earned him a posthumous Medal of Honor.

But these are just examples of men who distinguished themselves in combat. Everyone who has ever answered the call had the courage to put him or herself in in harm’s way.

The amount of reserve and active troops in the United States military makes up less than 1 percent of the population. The only thing the 99 percent can do is thank them and support them.

We will be making a donation to the Wounded Warriors Project, and we encourage everyone to show their support with a donation to that or any of the other military charities, such as the Fisher House Foundation, Army Emergency Relief, Navy-Marine Corps Relief Society or the Intrepid Fallen Heroes Fund.

From everyone here at Nebo to the 21.5 million veterans in the United States, the 2.3 active and reserve troops, and to every veteran that is no longer with us, thank you.