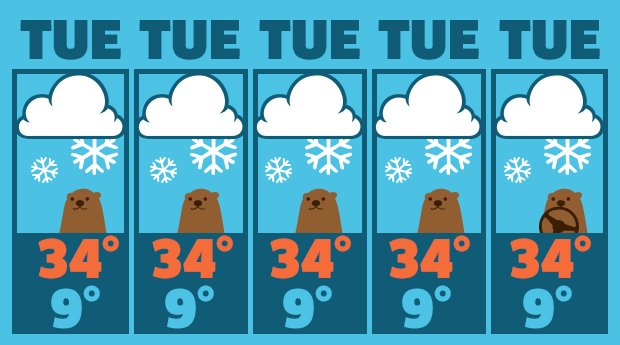 You're not going to learn how to maximize ROI or write enticing CTAs by watching this movie, but you will learn some essential human lessons that are just as valuable in 2013 as they were in 1993. Groundhog Day can make you a better marketer if:

You hate talking to people

I’m the kind of person that usually follows a stranger’s “How are you?” with a vanilla “Good, how about yourself?” as I’m hurrying away, not so subtly implying that I don’t actually care how you’re doing. It’s not being rude, it’s just doing the bare minimum. We’ve all been there—stuck in our own little world, busy, tired, just wanting to get on with our day. In Groundhog Day, Bill Murray is the same way. He loathes awkward small-talk with strangers, friends…pretty much everyone. But while he’s trapped in a never-ending time loop, he learns the value of connecting with others and finds great fulfillment in helping them solve their problems. We could all benefit from digging our head out of our laptops a few times a day in order to talk to and better understand our clients and their users. If grouchy weatherman Phil Connors can change, so can we.

All of your days feel the same

Life as a working adult can get reeeeal repetitive sometimes, right? There’s no summer, winter or spring break to look forward to. Gone are the huge milestones like turning 18 and 21, graduating from high school and learning to drive. At a certain point, like it or not, your life goes on auto-pilot until further notice. Groundhog Day teaches us that the only way to change course is to grab the wheel—that it’s within our power to change things. Phil Connors eventually betters himself by learning from his mistakes and investing time in taking on new skills and experiences. If you're bored, take the initiative to get involved in a different aspect of your projects and learn to see things from a new perspective.

You can't think outside the box

As a writer, I’ve always been fascinated by how the script for Groundhog Day took a non-linear approach to time way before films like Memento and Pulp Fiction revolutionized the way we looked at story. The endless loop structure was something that hadn’t really been seen before Groundhog Day, but has been used quite a bit since. The loop is the key to the entire movie. It amplifies the sense of repetitiveness the main character feels every day of his life, and, without that one element, the movie becomes a straightforward tale with only a fraction of the impact. The lesson? Don’t be afraid to push the boundaries of what’s expected or even what’s considered possible.

You don't give a shit

At a certain point in the movie, Phil Connors becomes defeated. Each morning when he wakes up, he’s forced to relive Groundhog Day again no matter what he does. Submitting himself to the fact that nothing he can do will have any impact on his predicament, he begins acting out with reckless abandon. He breaks the law. He tries to kill himself. He stops caring completely. Unsurprisingly, this does not break the time loop. Isn’t that telling? Giving up isn’t the way to solve your problems, even if you feel at the mercy of things that are out of your control. You have to care. In our industry, if you don't, they'll find someone that does.

You can't find the deeper meaning

Weatherman Phil Connors hates Groundhog Day, even before he gets trapped inside of it. It’s a ridiculous tradition, and he loathes the entire thing. I get that. I think the same thing about the Macy’s Thanksgiving Day Parade. But, as Phil learns at the end of the movie, there’s often so much more to life than what’s on the surface. In his famous sign-off line, at the end of his final Groundhog Day report, he notes:

“We know that winter is just another step in the cycle of life. But standing here among the people of Punxsutawney and basking in the warmth of their hearths and hearts, I couldn’t imagine a better fate than a long and lustrous winter.”

It’s in this moment that all of Phil’s lessons come full circle, and he realizes that Groundhog Day isn’t really about an omniscient rodent but, rather, about the people of this town coming together in either celebration or commiseration and standing together no matter what. It’s the hidden truth behind so much of what we as people do. There's got to be some kind of human element—even just a shred of one—that you can cling to; something that makes each project worthwhile. Otherwise, what's the point?

So, can watching this movie really make you a better person? I’m not sure. It definitely won’t make you a worse person (I’m looking at you, This Means War). All I can tell you is that there are some seriously valuable lessons for marketers hidden inside Groundhog Day. It’s up to you what you do with them.