Tipping, Continuous Reinforcement, and the $8,000 Steak 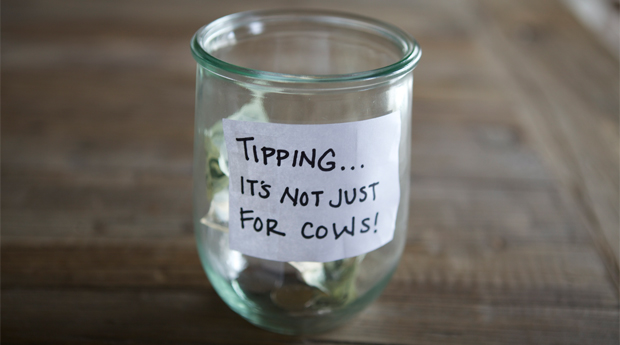 We've all seen the headlines.

They're inspiring stories of 'hard-work meets great generosity' (meets extreme jealousy from everyone reading along). But are they media fodder or are they representative of a greater trend?

We're an agency that prides our self on great work. We're always looking for ways to motivate the team, to be more effective in ways that benefit employees and clients alike, so we always take an interest in discussions on incentives and motivation. Is excellent work consistently rewarded within professions that receive tips? More importantly, is tipping an effective way of encouraging great service?

History of the T.I.P.

That's right, a "tip" is really an ancient acronym that lost its separating periods sometime over the past 200 years. Maybe they sunk while fording the river along the Oregon Trail (never ford the river!) or got stuck in some poor girl's perm back in 1985. Who knows. But legend has it that 18th century English pubs used to put jars out on the counter with a simple message scribbled on the front:

Customers could drop in a few coins in order to receive quicker service—a kind of payment that would go on to be known as a TIP.

It didn't take long for tipping to make its way to America—wealthy U.S. travelers brought it back from their European vacations in the late 1800s. And we all know how Americans love European fads, so it's no surprise that the practice caught on quickly.

In our country, we've come up with vague guidelines for who should be tipped. But, just like the rules of the English language, each one has as many exceptions as there are examples.

Some say you should tip workers whose salaries are low to account for gratuities. But that really only applies to waiters and waitresses.

Some say you should tip service workers but not skilled tradesman. But that doesn't explain the expectation that you'll slip a little something extra to your tattoo artist or hair stylist.

Some say you should tip workers with whom you have significant personal interaction. But you don't tip a car salesman or your psychiatrist.

How do we decide who needs a little something extra to do their job well? Maybe the lack of a clear answer indicates a deeper problem with tipping.

That's what we're all wondering, right? Do 'tippees' really work harder for better tips? And when they get them, does it encourage them to give better service in the future?

The answer is, no, not really.

Recent studies have shown that there is no significant correlation between quality of service and tip amount. Plenty of other factors have substantial impacts, like the bill total or the attractiveness of the server, but 5-star service appears likely to only generate a marginal increase in tips. The biggest reason people tip? Social pressures, like not wanting to appear cheap or become embarrassed.

Fun fact: did you know that drawing a smiley face on the receipt nets female servers roughly 15% more in tips? Doodling on a piece of paper sounds a heck of a lot easier than hustling three steaming-hot fajita platters through a crowded dining room so your guests aren't kept waiting, especially when the returns for you are likely to be about the same.

There are always exceptions. Everyone has been impressed by a server at some point and given a larger-than-normal tip. But the data shows that, generally, we make up our minds about how much to tip based on the bill total and a variety of social factors. This leaves the smart waiter not striving for great service, but rather trying to convince you to order extra drinks or desserts and hurry you out the door so he can get another table. And why wouldn't he? The numbers don't lie.

So, You Got a Better Idea?

We're not a group that likes to dwell on the negative. We'd rather see an opportunity than a problem.

The answer obviously isn't for everyone to stop tipping. A lot of people depend on tips to make a living and that's not going to change anytime soon. But maybe we can all take a little responsibility to find new ways to reward the people that treat us well, as customers.

Or maybe the onus should fall on managers to find new ways to motivate their team. What if an eatery changed the mold by paying servers full freight and eliminating the tipping expectation? As a matter of fact, a bar-restaurant in Athens, Ohio recently banned tipping (and raised prices) in reaction to legislation that would prevent the practice of pooling and splitting tips equally amongst employees. Time will tell what the impact in-house will be, but the move indicates management's dedication to fairness and a team-first mentality. At least they're trying. At least they're thinking outside the box.

It's a mistake to rely on what's known as "continuous reinforcement" to produce great work. The research suggests that a waiter is likely to get the same tip from a given table, no matter what he does (within reason, and assuming he doesn't develop male-model looks halfway through the meal).

Psychologists have known for a long time that the stronger reinforcement schedule is what's known as "variable ratio". Essentially, the best way to reward a behavior is to reward it on a random basis. If you don't know when the reward is coming, you're likely to be at your best more often, or so the reasoning goes.

So, what can we learn? Maybe think twice about sending the standard "good job" email every time a project wraps up. Maybe try buying the team lunch every once in a while instead.  Give higher praise, but less frequently. Be creative. Be a leader.

And, next time you go to dinner and have a great experience, hook the waiter up with a nice tip. You don't have to pay $8,000 for a $4,000 steak, but a few extra bucks won't kill you. It may not make a difference in the grand scheme of things, but who knows—in America, there are always exceptions.

Good advice for the tipper. A few bucks won't make a huge difference to your overall dinner costs and you will good about being more than fair, but what about the Tippe? What is the incentive for doing your best for each customer or client? The tip or the satisfaction of knowing you did your best? Money isn't always the answer is it, or have I subscribed too much to Mr. Rogers' philosophy?