If Time Is Money, Audio Is Gold 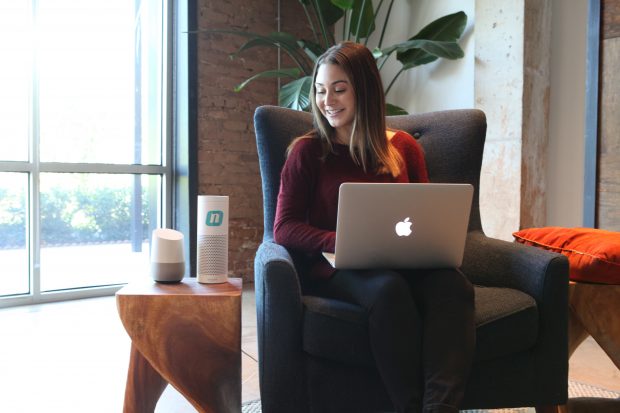 Let me ask you something: Do you take your cell phone everywhere, even to the bathroom? Have you ever run into someone while walking down the street because you were staring at your phone? Do you check your phone several times an hour? Do you spend five hours a day or more tethered to your cell phone? Are you part of the 60% of adults who keep their cellphones next to them when they sleep?

Yes? Well congratulations! You’re part of the 90% of Americans who carry their phone with them constantly, even to bed. But this (supposedly) won’t be the case for much longer. At the current pace of technology, some people believe we’ll move past our reliance on mobile screens within 3-5 years.

2020 being a year without phone screens may sound ambitious, but there are growing signs that companies believe in a screenless future; it seems like every week Google and Amazon release a new connected voice device. Which is really no surprise when 25% of mobile web searches are reportedly done by voice.

I’m one of those voice search people, and I also own an Alexa Dot (due to a happy Amazon accident). Friends often ask me the innocent question “how do you like your Alexa?” not realizing they’ll be forced to endure my endless ramblings on the implications of audio technology and voice search.

But the simple answer to their question is, “I love my Alexa.” I use it to play music whenever I’m home and set alarms at night, which puts me right in with the majority of Americans who own a voice assistant device and don’t use it for much more than mundane tasks like music, search queries and weather.

But right now, audio isn’t a main priority. Instead, there is heavy investment in video because by 2021 82% of the global internet is predicted to be video traffic. This is great news for marketers, because video monopolizes the consumer’s attention. For consumers, not so much.

There’s really no way to multitask while watching a video – it requires a lot more focus than we might want to give. Facebook recently tried to remedy this flaw by enhancing their News Feed video experience; they introduced Picture-in-Picture View to watch video while still scrolling the News Feed. This is an attempt to force video watching to be a multitaskable activity. But it’s not.

But what is easy is listening to someone talk while you’re doing something else. That’s why everyone from your mom to Blue Apron is starting a podcast right now. No matter what else you’re doing – driving, working, running – you can also listen to a podcast.

Podcasts are the gateway drug to voice multitasking. I like to think because I started listening to them in 2013, I’ve now moved onto other things, like shamelessly using voice-to-text in public. Yes, I get judgy stares, but it saves me time (except for some editing when Siri literally types out the words “crying face” rather than knowing what I want).

In addition to emoji aggravations, I spend a silly amount of time mad that my phone doesn’t have voice biometric authentication. Yes, I understand the safety implication. You think I listen to podcasts and didn’t hear that RadioLab episode? But when both of my hands are occupied curling my hair and I want to voice text a friend or hear their response read to me, the last thing I want to do is walk into the next room to give a fingerprint (or picture of my face) to unlock it.

I know I complain a lot, but my phone's audio capabilities actually aren’t all bad. I recently discovered Apple has a built-in capability for reading any website out loud. I can swipe over the text of a news article and hear it on the go. This feature is currently buried in the depth of Settings and labelled an “Accessibility” feature, but with changing audio trends it may not be long until this is an auto-enabled phone feature.

Yes, there are some limitations with the technology and with our brain’s ability to multitask. But when people eventually become too lazy to read the words on their phone screens, audio will be there to assist. Which means if you want to get rich in the future, you might want to think about how to be the first to capture people’s attention with audio. (I say “first” because although there are 25,000+ skills on Alexa, none of them are well used or reviewed. Of all people that start using a voice assistant app, only an average of 3 percent will still be using it a week later. Yikes)

I swear by audio because it removes friction from life. As the saying goes, “time is money,” and people care so much about time that they’re willing to pay for it. Uber didn’t become massively successful because they reinvented transportation – they succeeded because they sell time and convenience. Even if someone has limited funds, they’re willing to spend a lot of money on convenience.

Audio is convenient – it saves us time because it allows for multitasking. And in the very near future, I bet people will be spending a lot of money on quality audio experiences. I know I will.

Welcome to the new age and listen to our post here: