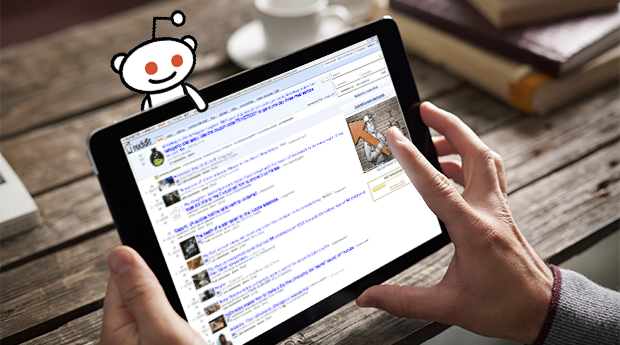 Reddit is one of those rare entities that polarizes people at the mere mention of its name. Some swear by it as a vital research tool and an invaluable source of information, while others revile it as anything from childish to malicious. The latter are usually the more vocal.

I’m convinced this has to do with a lack of familiarity. For people who use it every day, Reddit is their source for everything—research, breaking news, music recommendations, etc. But for those who rarely interact with it, they only know its bad side. They don’t know about the time a redditor actually saved someone from CO poisoning or the time a redditor shocked the world with a ridiculous yet believable plot twist for the newest Star Wars movie.

Instead, they only read about stories like the infamous Boston Bomber witch hunt, where a group of redditors obsessed over finding those behind the bombing, publicly accusing people with no connection to the incident.

This series is going to dig into the nit and grit of Reddit, looking at what it is and why content marketers need to start using it. Whether you’ve never heard of the site or have been avoiding it for years, this series is for you. It’s time to embrace one of the most active and invested communities on the Internet.

Remember show and tell from elementary school? That’s basically Reddit—except in this case your class is anonymous and can vote on whether what you’ve shown is worth seeing. And instead of action figures and Pokémon cards, everyone is sharing links and content from across the Internet.

Reddit is a global community hellbent on sharing the latest and greatest of the Internet. Users submit links, videos, images and text posts to one of some 10,000 communities, called subreddits, then other users vote for which posts deserve attention and which ones should never see the light of day.

This voting system is one of Reddit’s defining features. Every user with an account has the option to upvote (approve) or downvote (disapprove) anything on the site.

Post visibility on Reddit is determined almost entirely by the community. Posts with many upvotes make their way to the top of the page, while posts with numerous downvotes are relegated to places users will never see. Reddit shows this with a score to the left of each post.

The score is the rough difference between a post’s upvotes and downvotes. A high score means it’s a competitive post and more people will see it on the site. It’s a rough score simply because Reddit gives each vote a certain “weight” in order to prevent bot and spam accounts from voting repeatedly, ultimately misrepresenting a post’s actual value.

Along with addressing illegitimate upvotes and downvotes, Reddit’s algorithm also works to move posts out of visibility over time regardless of popularity. Although top posts tend to stick around for longer, the idea is to keep content fresh and updated rather than allow posts to hold the top position for weeks on end.

You can think of subreddits as user-run publications. They create content for dedicated audiences, and sometimes, when those posts are popular enough, they reach the entire Reddit audience.

The way this works comes down to how the site is organized. Reddit is made up of a few key elements:

So, what does all of this mean for you? It means you stand a better chance of seeing content you actually want to see.

Although you might not love everything posted to your subscribed subreddits, you have full authority to choose what sources of information—and what topics—populate your front page. Essentially it’s an RSS feed for user-generated content and topic-specific posts.

People are often more honest when their personal reputation isn’t on the line.

Vested conversations and unbridled opinions abound when personal identity is taken out of the equation. Whether people are discussing the merits of various political ideologies or the quality of Bethesda’s latest video game release, a lack of personal risk means honesty and good information will (most likely) win the day. And that’s a win for everyone.

That being said, anonymity is a double-edged sword. People can say some rough things online when no one knows who’s behind the message, and some people can be flat-out brutal. Reddit faces the same challenge of online harassment faced by nearly every social channel. Thankfully, Reddit’s moderators and voting system help root out negativity wherever possible.

Reddit is not a single community. With more than 230 million unique visitors in January alone, it would be ridiculous to assume everyone visits Reddit with the same intentions. That’s why Reddit has subreddits dedicated to everything from adorable animals to vacuum cleaners.

On Reddit you have the opportunity to hear from and interact with people from all walks of life. Users range from teenagers to people well into their 70s and 80s. According to Reddit’s Audience and Demographics page, users are almost evenly split between male and female (53 and 47 percent). The same can be said for the split between US users and global users (54 and 46 percent). Although it’s not a perfect sample of the world, it is pretty inclusive.

Still don’t believe Reddit is a diverse place? Check out the animation below showing the number of subreddits created over the last decade.

Source for this awesome GIF: http://redditmetrics.com/visuals/reddit-growth-gif

Although it includes every subreddit ever made (as opposed to only the ones that are currently in use), the animation makes it clear that the interests of Reddit’s communities are many. Just take a look at the site’s current popular subreddits.

Source for this awesome chart: http://redditmetrics.com/top

The 10 largest subreddits cover science, news and entertainment, along with subreddits that leave room for questions and discussions on any topic. And these are just the big ones. Communities cover almost every niche you can imagine.

Want to learn how to build your own fire pit? r/DIY has you covered. Missed something and want to know what happened? r/OutOfTheLoop is here to help. Maybe you just need something explained to you in really simple terms. r/ELI5 will tell you all about it like you’re five years old.

Why You Need to Use It

Why should these points matter to you? Because there aren’t many resources in the world that allow you to step into conversations and communities as they’re developing. Reddit gives you the chance to see things from your audience’s perspective. You get to learn about their wants and needs and the content they enjoy.

You can learn about the inner workings of specific industries. Putting together an editorial calendar for a client that manufactures vacuums? r/vacuums would be the perfect place to start learning about the industry and relevant topics.

Get a Ground-level View of Conversations and Perspectives

Reddit’s greatest benefit to content marketers lies in its sheer number of active users and communities. Today, there’s quite literally a subreddit for everything, meaning there are people discussing most every topic you can possibly imagine. It’s a trove of market research and user personas waiting to be found.

Subscribing to a subreddit is a deliberate decision, one many users make with the intention of becoming a part of the subreddit’s conversation (note: this excludes the default subreddits you’re automatically subscribed to from the get-go). Over time, this leads to communities filled with active participants who regularly contribute posts and ideas.

And if you’re someone on the outside trying to learn more about a target audience or a specific group of enthusiasts, you have to use Reddit. Listen in, sift through past discussions and see what people genuinely care about.

Lastly, you have the opportunity to interact with and engage the communities you’re interested in. Although “lurking” is completely okay by Reddit standards, there’s so much to gain from taking part in the conversations. Ask questions, reply to comments and make posts of your own.

The world of Reddit gives you an idea of what content gains traction and what falls by the wayside. Remember those upvotes and downvotes I mentioned earlier? They’re the main way posts bubble up to the top of subreddits or the site’s front page.

If you’re anyone involved in content creation, seeing content perform in real time is an invaluable opportunity, and it’s one that you have on Reddit. Between a post’s comment section and overall score, you can gauge the audience’s sentiment toward it and the content it links to. And thanks to the aforementioned anonymity, people aren’t afraid to say what they really feel.

At an even higher level, watching content perform within the framework of a specific subreddit can help you accurately gauge what users want to see and discuss. Let’s take Atlanta’s subreddit (r/Atlanta) as an example. 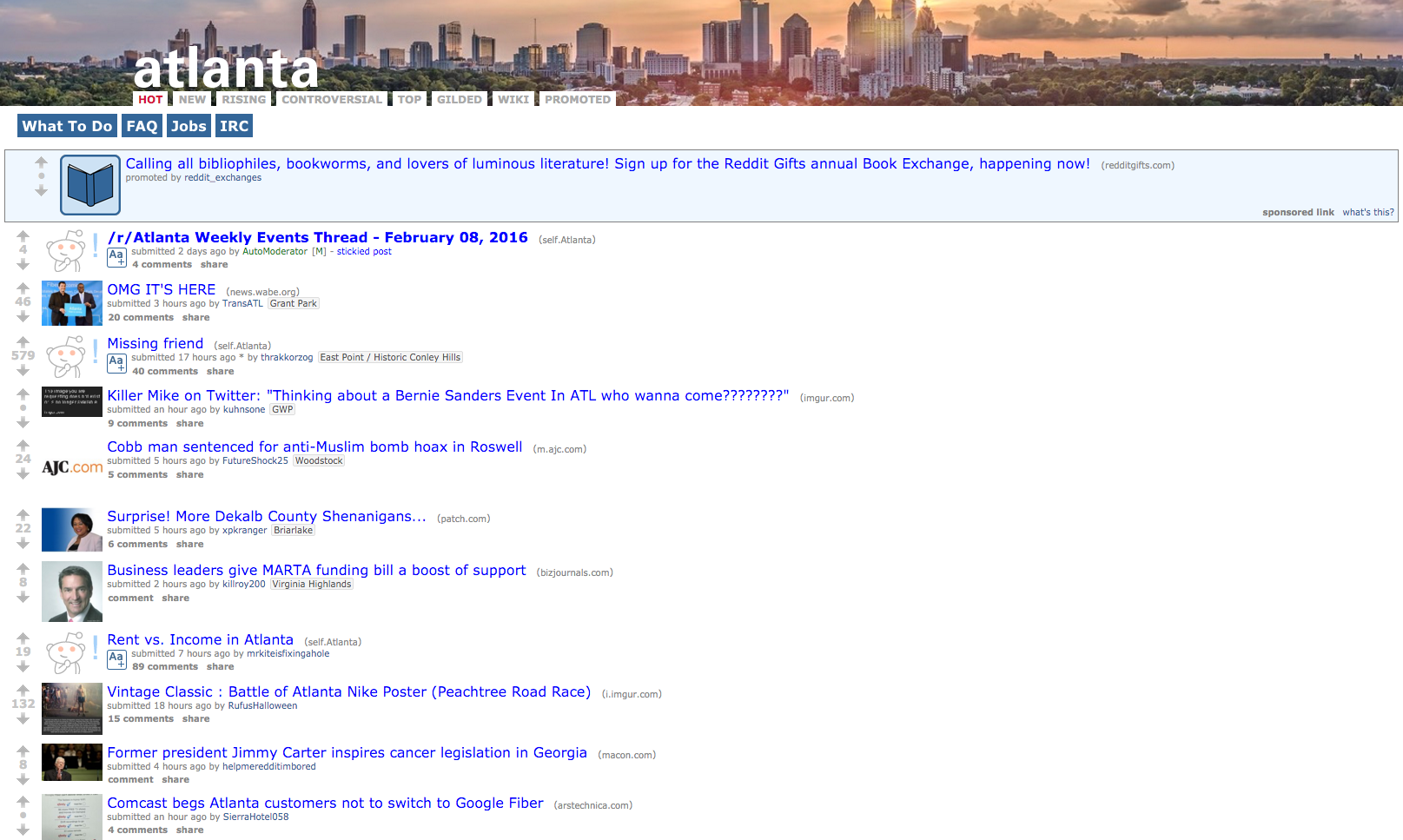 Just from a quick snapshot you get an idea of what people care about—most notably the top post linking to a story about Google Fiber’s arrival in Marietta and Duluth. Scrolling further down the page, there are older high-ranking posts discussing the progress of Google Fiber and the ongoing woes of Internet service providers in Atlanta. If I were going to write a post for a brand serving the Atlanta market—a property management company, for example—I might consider a piece comparing the area’s Internet service providers.

I don’t think anyone knows what they’re doing the first time they attempt to use Reddit. Part of it is because the site’s design isn’t exactly user friendly, and part of it is because there are so many different ways to use Reddit. If you’re not sure what you’re doing, stay tuned! Part Two of this guide is coming through shortly, and it has everything you need to start using Reddit like a pro.