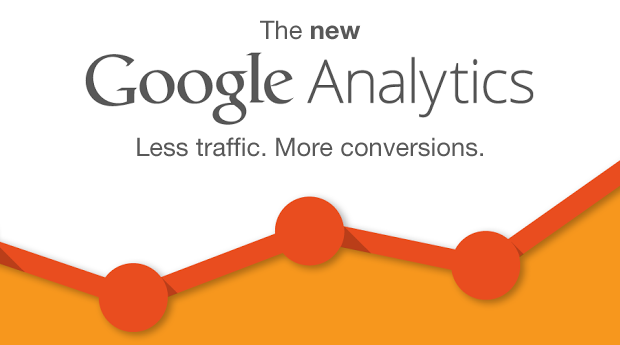 In a few weeks, Google Analytics is expected to roll out a new user interface. We were lucky enough to beta-test the new GA prior to its release, but before we give you the inside scoop on all the new features, we think its important to understand the reasoning behind some of the changes Google is making. It’s not just aesthetics. It’s not just a simple UX update.  This time around, Google is substantially altering the way in which they’re presenting information, and if we know anything about Google, it’s that they don’t do anything without a purpose.

Google wants users to start thinking beyond just visits. They want people to account for the entire conversion funnel, how users behave on their site and how it all ties together. They want to help people move beyond just measuring overall traffic numbers by making conversion information more visible than ever before. It is clear that the focus of this update is to change the analytics paradigm in a forceful way. Google is done trying to educate people. Now they’re changing their product and forcing everyone to adapt.

Essentially, Google wants users to adopt the Avinash Model approach to analytics, or what Google is now calling, the ABC model. This new approach pushes us to focus on three key areas of web analysis: Acquisition, Behavior, and Conversions. As you begin to explore the new Analytics interface, you’ll find it finally aligns with what Avinash has been preaching all along.

The new interface also includes a feature that helps GA compete with the flexibility and customization of SiteCatalyst. It is called Channels, and it allows users to customize how they’d like to see data by creating custom source, medium, campaign groupings, or however it is more valuable for the user to view their data segmented. No more exporting data to excel and manually merging things together; GA is doing it for us.

A second new feature that offers more flexibility and customization, allowing users to create new groups of metrics to be displayed on the default reports.

Last but not least, the new interface offers an educational feature called, Analytics Education. This feature will help users obtain a better understanding of reports and the types of analysis that can be performed.

The first thing long time Analytics users will notice about the new interface is that it has reprioritized conversion metrics as opposed to visit numbers, helping you quickly form a more complete picture of how users are behaving on your site. Google has added and modified key features with the goal of helping users evaluate site performance in better ways and make informed decisions about where to invest. 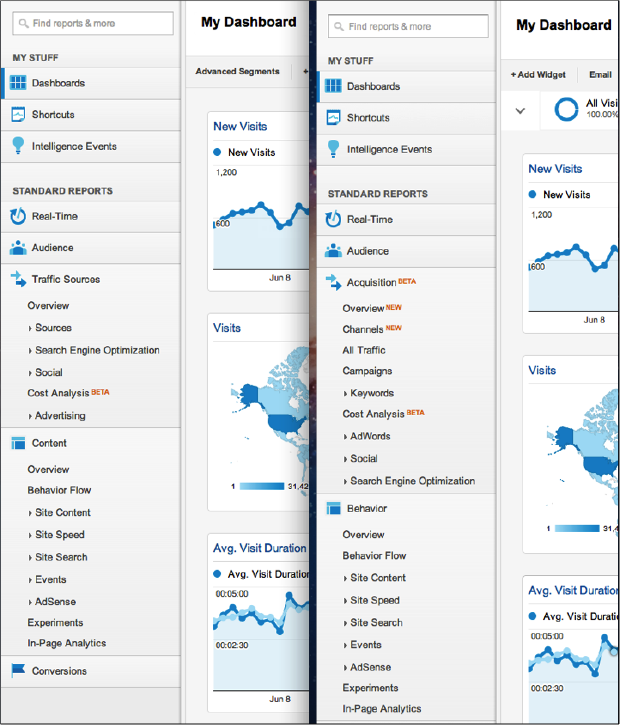 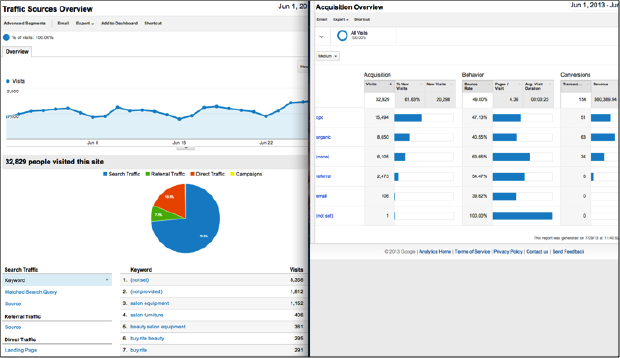 As you can see, the old Traffic Sources overview report showed us a pie chart of the different mediums and the top keywords driving traffic to the site, and overall, all the metrics available here were all about how visitors got to the site.

The new Acquisitions report has been redesigned to supplement this acquisition information with additional metrics about how visitors are interacting with your site (time on site, etc), and tying it all to goal completions. All of this information is now presented cleanly on the overview report. If there is a specific goal that you’d like to focus on, you can use a drop down menu available on the right to select it.

The greatest change to the GA interface is that users will now be able to see custom channel information across the interface. Previously, the multichannel funnel report was the only area inside Analytics that allowed you to customize and create different channels, so you only had access to custom channel CONVERSION metrics. 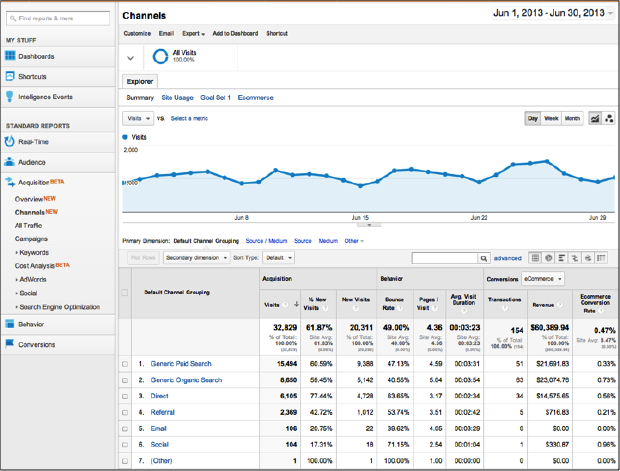 However, on the new interface you’ll also be able to view custom channel data on the Acquisition Overview and Channels Reports, and therefore, have complete information on how your customized channels are performing in terms of everything from visits to revenue. The new Analytics interface will allow users to easily view acquisition and behavior information, as well as conversion metrics per custom channel.

A simple but much needed feature is the new summary tab, which will be available on all Acquisition reports. Inside the old Traffic Sources Reports, site usage, goals, and e-commerce were separate and you had to move from tab to tab in order to get a complete picture of the performance of the different mediums.  Now, the summary tab gives you an end-to-end picture of how traffic is performing. You’ll be able to see visits, behavior and conversions all in one report.  In the old interface, these capabilities were only available by creating a custom report. 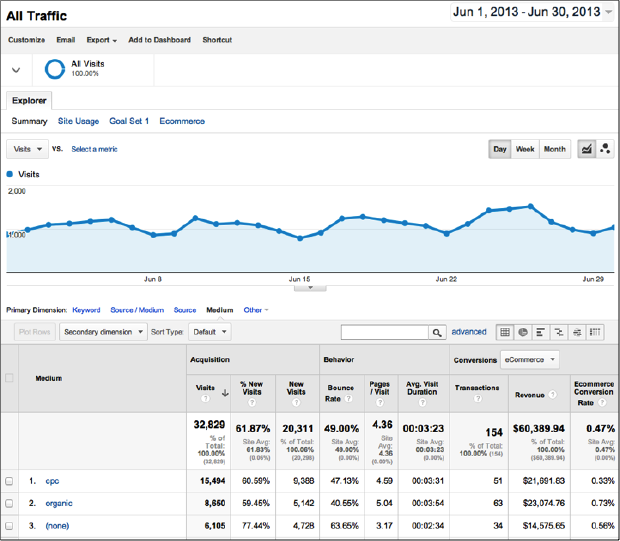 Another very useful new feature is the Create New Group tab on many of the Audience, Acquisition and Behavior Reports. With this new feature, you’ll now be able to define a group of key metrics that you’d like to have available on all of these reports!

You can label the subgroups, choose the metrics and drag them to define the order in which you want them to be presented.

One small but great thing about this new feature is that you’ll be able to select goal COMPLETIONS (see Catalog Requests on the table below, for example) as a metric. Before, you had to export the visit and conversion rate numbers and multiply them to get the actual number of goals completed. 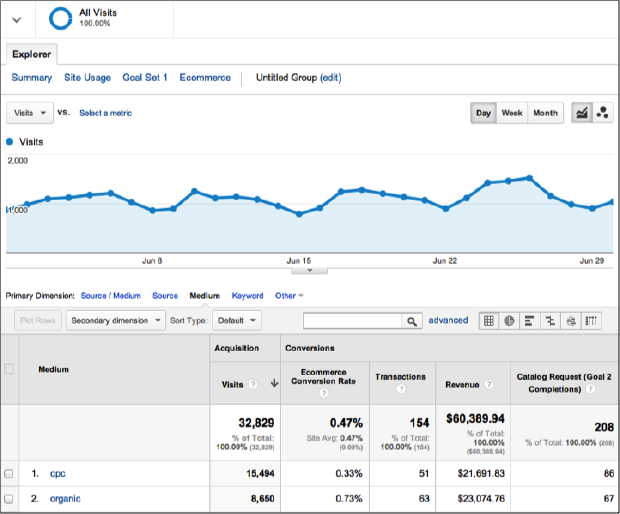 Did you notice the graduation cap on the right hand side of your reports? This is GA’s new Analytics Education feature.

As you can see below, when you click on the cap button within any report, it will display the set of questions you can answer by evaluating the report, an overview of the report if it needs any prior set up, plus an educational video. All within the Google Analytics user interface.

The only big shortcoming of the new UI, in our opinion, is the loss of referral paths, which I’m sure many of you use on a regular basis. With the old interface, you were able to click on a referral source to see the referral path, or, in other words, the actual page that users were on before being referred to your website.  Now, that information is not retrieved. You are still able to see the referral source but not the actual referral page. On the positive side, Google knows this is valuable information and is working to get that feature back on the new interface as soon as possible.

Google’s latest interface update re-emphasizes the importance of conversions over traffic, and makes it easy to access a variety of conversion information from overview pages and standard reports. The changes shouldn’t take too much getting used to for GA veterans, as most of the new pages are intuitive and make data easier and simpler to view. For many users, though, the new interface will force them to re-evaluate their traffic-based approach to web analytics and digital marketing in general.

As Google rolls out the new interface to all users, let us know what features you are looking forward to, which ones are you enjoying the most and what improvements you feel need to be made.