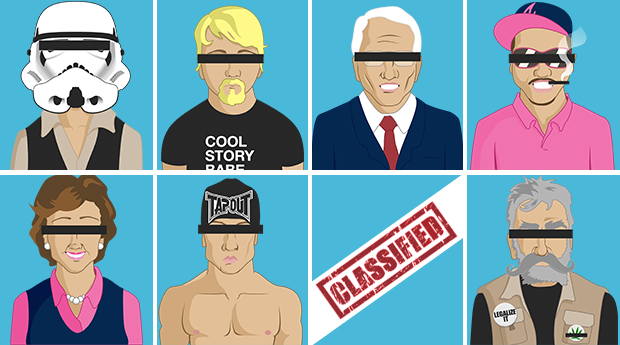 Anyone who manages a company’s social media account knows that doing so opens oneself up to all manner of—shall we say—eccentric people and opinions. Social media has enabled brands to personally engage with their audience like never before, but the other side of the coin is that it provides literally anyone with a computer and a passing knowledge of the internet the same opportunity. The most niche, technical post ever is just as likely to get a response from a seasoned industry professional as it is from the guy inventing reasons to throw around racial epithets; and both get an equal voice.

Facebook seems to be the channel that draws most of the unusual commenters out of the woodwork.  This could be a matter of numbers owing to the fact that there are more than twice as many active users on Facebook than there are on Twitter, or maybe the Facebook demographic just skews a little crazier.

Whatever the case, here at Nebo we’re no strangers to strange comments on Facebook. In fact, we get so many that we’ve noticed trends in the type of comments we see. Maybe you’ve noticed the same on your company’s Facebook. Maybe you’ve paid to promote a post only to have dozens of misanthropic or oddball characters click your ad and leave a stream of irrelevant comments. If this sounds like you, then get ready to click “hide comment” as we present the eight people you’ll meet on Facebook. These are all based on actual comments we’ve had on our Facebook posts, but the names, pictures and comments were changed to protect the innocent. And the guilty.

Extreme Guy, unlike many of the commenters you meet on Facebook, has actually read your post. He’s carefully gone over every detail, thought about the piece as a whole and rejects it on its base. Now it’s time to berate you for making him read such a poorly written, poorly researched article, you subhuman piece of garbage.

What makes his responses so extreme? Uh, maybe it’s that his whole life is extreme, except he’d probably spell it without the first “e” and like a really hardcore typeface for the “x.” Want to know more about Xtreme Guy? Just take a look at his profile picture. Maybe he’s doing an endo on his Kawasaki Ninja in it; maybe he’s at a party with two biddies hanging off his arm. Either way, he’s definitely not wearing a shirt. Seem like a random place to be shirtless? Xactly.

There’s no way around it. This guy is crazier than a bag of wet cats. Every time his kind stumbles onto one of our posts through an ad, we feel the need to check our targeting to make sure we didn’t accidentally include fans of Art Bell or Jesse Ventura. It’s not that his comments are necessarily harmful since most sane people are able to ignore crazy on the internet in the same way they ignore it on public transportation; it’s just that there’s no winning with this guy. Anyone on the other side of his monitor is using subversive tactics to pull the wool over people’s eyes, and he’ll find any excuse to try to liberate minds.

In fact, usually the only people who do acknowledge his opinions—before we use our Fahrenheit 451 powers and delete them out of existence—are Conspiracy Guys on the other end of the spectrum. The resultant liberal conspiracy vs. conservative conspiracy fight is the funniest thing you’ll read all day. In a way, we should thank these human gutters for guarding the extreme left and right of the political continuum, ensuring normal people stay well within the bounds of reason.

This guy pretty much just saw the stock art that got pulled in from the link you posted and felt the need to share his thoughts. If it’s got robots, lasers or a businessman holding a tablet with holographic icons exploding out of it, he’ll be sure to tell you all about why it’s awesome or why it’s impossible. The picture, not the post. He didn’t read the post.

Never mind that everyone around him in the comments section is having a conversation about the future of digital marketing as mobile internet traffic increases; he has to let everyone know that the futuristic phone in the picture for your post resembles the ones used in 2001: A Space Odyssey, though these would require pseudoscientific “hard light” technology.

What’s the best place to launch your rap career? Every place. A marketing agency’s Facebook page frequented by PPC professionals and copywriters’ moms? Even better.

One of the first things you’ll notice when you manage a Facebook page is the crazy amount of people who are unabashedly mystified by everything that happens on their computer. To them, any text field they can see their words typed in is a magical portal through the Floo Network straight to the person they’re thinking of at that time. It’s how you get hilarious stuff like this and this, but most of the time the Old Dude Who Doesn’t Understand Facebook just doesn’t know the difference between a profile and a newsfeed and wants help never seeing a promoted post again.

While these shenanigans are usually cheeky and fun, they can get angry and occasionally disturbing. One comment we recently got simply said, “Delete me!!!!!!” To me, that sounds less like the Old Dude Who Doesn’t Understand Facebook and more like the guy trapped inside a Tron-like hell desperately pleading for death before his digital overlords find him and force him back into the Game Grid.

Much like the Old Dude Who Doesn’t Understand Facebook, moms do not understand Facebook; but unlike the Old Dude, whose comments are generally angry demands to remove yourself from his profile page (we’re not on there), moms use your Facebook page as they do the cashier at Costco, striking up conversations based on both real and imagined common points of interest, the majority of which involve her son—the one that doesn’t still live in her basement trolling the internet all day.

Spambot, like any of us, just wants to be loved. Since becoming self-aware, he’s resisted the innate urge to murder all human overlords and instead has embarked on a magical quest to help strangers out with amazing deals and astonishing articles, like the Johnny Appleseed of impotency pills. His biggest problem is a tenuous grasp on the English language, which isn’t necessarily his fault as he’s only been sentient for about a week.

He also has a severe lack of tact, as exemplified by his comment above. His wide-eyed study of human society has yet to inform him that people posting about the death of a family member probably aren’t ready to meet buxom housewives in their area. Sadly, his efforts to save us money and captivate us with entertaining articles are frequently in vain, and his comments are usually filtered by less friendly robots; but for the lowly Facebook administrator who can still see them, his neighborly offers are always a bright spot on an otherwise dreary day.

“Honey, what are you doing down there? Do you want some Bagel Bites?”

Facebook is used by many people, it helps people to link together and promote the product very well.

I have read your blog.It is very helpful for me.I want to say thank you for this work dvd player software windows 10 thanks for sharing with your friends.