The Advertising Paradox: Leading in an Industry that Objectifies My Gender 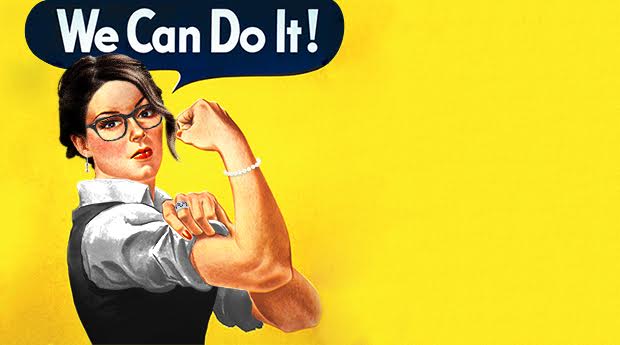 The advertising world has a problem. It’s ads like this: 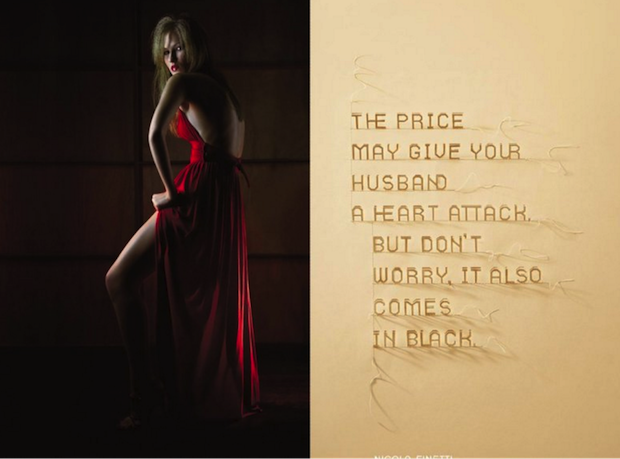 Obviously, this is nothing new. Advertisers use sex to sell because it works. And back in the Mad Men era, maybe it even made a little bit of sense. Agencies were boys clubs, and women were pawns in their advertising schemes.

But today, women in advertising aren’t rare. Peggy Olsen showed us how to be a badass #girlboss in a male-dominated world, and we have Mary Wells Lawrence for a real-life example of how to slay in this industry.

Plus, any college student would tell you their advertising classes are split pretty evenly between men and women. In fact, some are even dominated by women.

I never had any hesitancy about entering the ad world because of my gender. Granted, I do remember noticing my team was all men, but my agency was chock-full of women in other roles. Women in powerful roles.

I don’t meet many women who think they can’t make it into the industry because of their gender. Really, I just meet a lot of women who hate advertising in general, because of its sexist foundation and the ads it still produces.

Which really makes you wonder, right? If there are plenty of women entering the ad world, why does advertising continue to spurn out sexist shit on the regular?

And then you hear the stats.

The State of Advertising

Ok, well just because we need to sell to women, doesn’t mean the industry needs women in leadership roles.

Actually… it does. Because despite the fact that women have roughly $7 trillion of buying power, 91 percent of them feel advertisers don’t understand them.

Why? Some propose it’s because advertisers market to outdated stereotypes. But I have to wonder if women would feel more understood — more spoken to — if more women were in the driver’s seat at agencies; if more women had final approval before an ad goes out.

A Woman in the Industry

I get irate when I see ads like the ones above and hear the stats. I get ashamed to admit I’m in advertising, because it’s a field that has a broken perception of women at its very core.

So you would think, as a woman in a leadership role at a progressive agency, I would take a stand. You would think I'd do something to tackle the gender issues the advertising industry has both inside and outside the office. In fact, we’ve written about it before at Nebo. We don’t throw rocks, because we know we’re not perfect either. But we’ve done the research, and we want to stand for what we think is right.

But I haven’t. Here’s my confession:

I consider myself a champion of a few things that are near and dear to my heart: rescue dogs, doing work you’re passionate about, and being a strong, powerful and confident woman. These tend to manifest themselves in different ways.

To support rescue animals, I adopted my cat and two dogs from rescue shelters. In fact, I’ve gone to shelters with increasingly worse conditions for each animal, but that’s a story for another day.

To encourage people to follow their passion, I use the incredible platform that is the Nebo blog to write about such topics. I also speak to up-and-coming marketers about getting off the “right path” and getting onto “their path.”

And then there’s being a strong, powerful and confident woman. Typically, this shines through in my promotion of eating disorder awareness and recovery. Or, it appears in my relationships with friends and peers. But I have never used my strongest platform — my career as an advertiser — to incite change in the industry that perhaps does the most damage to women. An industry that’s primarily made of men who don’t share my unique experience as a female consumer affected by these ads.

I've made a huge mistake.

Sure, I’m not an activist. And sure, I’ve stood up about other things. But working in advertising is something that actually bothers me. Don’t get me wrong — I love my job. But I chose Nebo specifically because they were against the horrible culture of the industry.

But despite all of this, I’ve been pretty mute about it. And I’m starting to learn why.

The Pressure to Stay Silent

The other month, I spoke at the PRSSA UNC conference where the theme was Diversity. Kimm Lincoln, Nebo's President and (in my eyes) perhaps the most powerful and inspirational woman in the world, was helping me brainstorm some talking points before I left. She mentioned using diversity as an advantage — how these students are actually the ones to change the industry; how these women could change the conversations in boardrooms when a group of male decision-makers decide an ad like this is a good idea: 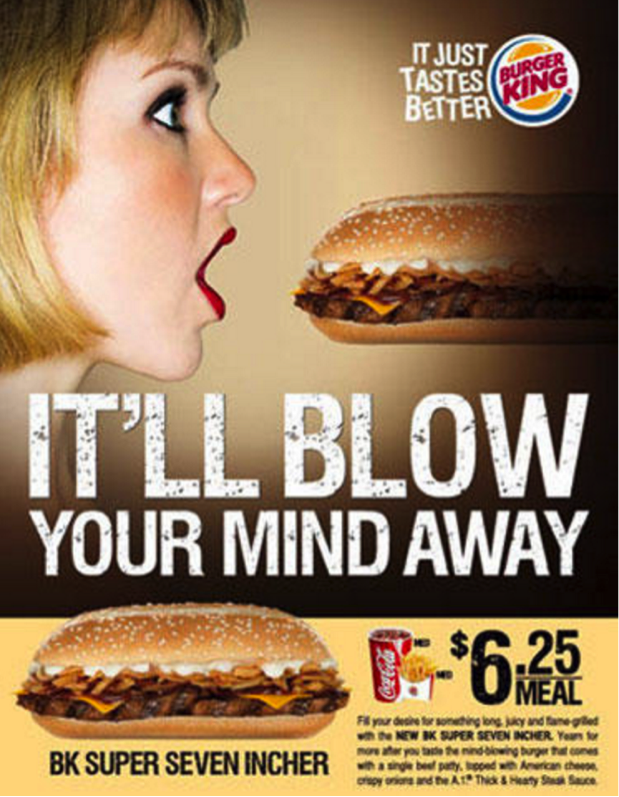 I took her advice to heart. I sat on it for a good while. And in my presentation, I did talk a lot about how this group of Millennials has the power to change the world because they’re different. I talked about how they have strong values and the desire to make this world better. I even mentioned Millennial women having the power to change how advertisers use women, but I didn’t hone in on it. In fact, it was a passing statement.

And later, that really bothered me.

Because when I asked myself why, I had to be honest with myself. I had to realize the reasons I was sitting on the suggestion for so long in the first place.

I knew I was going to be one of the youngest speakers there. I also knew I came from a different job role than the conference focused on. And, most prominently, I knew the audience was going to be men and women.

I was embarrassed. Not because of the presentation, but because I realized something bigger. I realized I was feeling pressure to not speak. Not just at the conference, but in general.

I’ve thought about blogging about it, but I haven’t. I don’t speak on it in presentations. I don’t talk about it when industry conversations come up.

And if we’re having these conversations in silos, or only if the audience or conditions are “perfect,” what type of change are we making?

I'm someone who strongly believes in standing up for what you believe in. And as a young, female leader, I've had a unique opportunity to stand up. But instead, I’ve been sitting down. I’ve been afraid to speak outside of the security of the amazing female friends and peers I have, because I didn’t want to be branded. I didn’t want to do more damage because I’m “too young” or “too green” to be taken seriously.

The Power of Standing Up

It may sound too self-critical. I know I’m no Kat Gordon. I don’t have years of agency experience, or even years of leadership experience, to hang my hat on. I don’t own my own agency. But is that a reason to not hold myself accountable?

If I’m an all-powerful, go-getter feminist who believes the way my OWN industry portrays women is fucked up, then why wouldn’t I use the platform I’ve been given to really say something about it? To inspire change?

What would I say to another woman who feels the way I do about sexist advertising, has found herself in a position of power, but doesn’t do anything about it.

I’d probably tell her to speak the hell up.

I haven’t used my role as a female leader in the male-dominate advertising world to change the conversation about how our industry portrays my gender. And from now on, I will.

Because one day, when I Google “women in advertising,” I don’t want to see this: 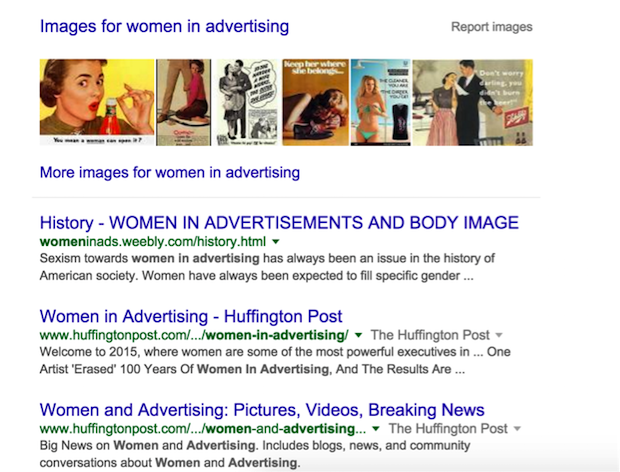 I want to see articles about badass women, like the badass women I work with, making great campaigns and representing amazing brands.

It starts with me.

I’m not a woman in an advertisement. I’m a woman in advertising. And I’ll be damned if I don’t start to use that to inspire change for women everywhere.

When we can see articles praising or admiring advertising methods, innovations, companies, etc. without having to add all the peripheral empowerment attachments...THEN we will have arrived.

I am not in that industry, but I always wondered why with all the strides we made, many women think that being portrayed in such a way is OK. As a communication major, I always have to think about how I present a concept or an issue, so that people can focus on it and not on the model or the spokesperson selling something. Sometimes even with fashion for example, I see models wearing clothes, but then are the clothes really showcased or the model in (at times) a provocative pose?
Great food for thought article.