Social Media Reddiquette: A Marketer's Guide to the Front Page of the Web 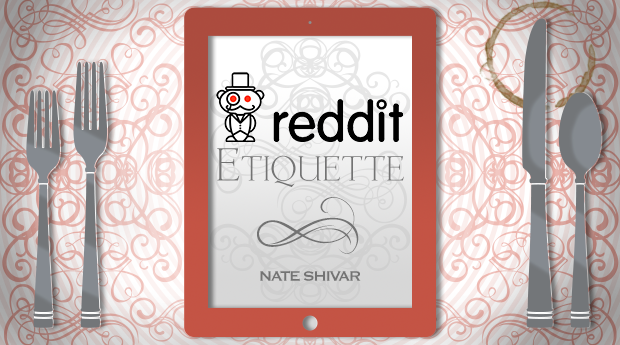 Reddit is not only one of the Internet’s largest social networks (90.9 million unique visitors, generating 5.08 billion pageviews in one month), it is also the indisputable tastemaker of the Internet.

Think of the last meme, funny picture, or crazy video you saw in your Facebook feed. It probably was originally found on reddit. From Gangnam Style to basically most of Buzzfeed’s site, reddit lives up to its self-styled nickname of “The Frontpage of The Internet.”

Reddit is where you go for 15 minutes of Internet fame. But it’s also a place to go to find other people interested in some of the most niche topics imaginable.

There are 6,416 active communities (“subreddits”) that range from the massive like /r/videos, dedicated to finding interesting videos to /r/dogswearinghats, dedicated to...people who like to look at hats on dogs.

If you add up tons of traffic + viral capability + targeted audiences, you’d imagine that reddit was a marketer’s paradise. But in reality, it’s often a place for unwitting marketers to go and get embarrassed and called out on /r/hailcorporate (just ask Woody Harrelson’s PR agency). Reddit has a unique culture, and part of the culture is a very wary (some say irreconcilable) relationship with marketers.

And yet, right now the 20th most popular video of all time on reddit is an advertisement for dollarshaveclub.com. It’s a submission that went viral and helped launch the company just over a year ago. And the company remains so popular that when it launched a new product this summer, that video immediately made it to the Front Page of reddit, helping to generate 1.9 million views on YouTube.

As an analogy, social media strategy can be kind of like building a campfire. It takes time, thoughtfulness, and work to keep the kindling burning and the logs rotated. That’s the work of growing and engaging your Twitter/Facebook following. Reddit is like social media’s lighter fluid: used thoughtfully and well, it can help you reach a bigger audience and rapidly accelerate your social efforts. It can also blow up in your face and pollute the soil if you pour a mindless deluge on your campfire.

Defined by Wikipedia, a shibboleth is a word, sound, or custom that a person unfamiliar with its significance may not pronounce or perform correctly relative to those who are familiar with it. It is used to identify foreigners or those who do not belong to a particular class or group of people. Though reddit has rules, its shibboleths are arguably more important if you are considering using the site as part of your social media strategy.

Here are guidelines to pass the shibboleths and join Dollar Shave Club and Barack Obama as reddit rockstars instead of dwelling in reddit jail with Nickelback and Woody Harrelson’s PR agency.

Unlike other social platforms where you have to have followers or subscribers to speak to, Reddit is a platform where anyone can subscribe, submit, or advertise on any public community (‘subreddit’).

Since reddit also uses usernames instead of real names, it can be tempting to just show up and start posting and promoting. This strategy might be perceived as creative guerrilla marketing, but it's often just a clumsy recipe for failure and possibly embarrassment.

Even though each subreddit is open, remember that it was created and is still run by volunteer moderators. And while some subreddits have a more passionate following than others, anyone subscribed to (‘a member of’) a subreddit is going to at least be expecting useful, relevant content and has the power to upvote, downvote, or comment.

Treat each subreddit like a coffee-shop meetup or open-door workshop. Just because you may be interested or have something interesting to share doesn’t mean that you immediately barge in with submissions and opinions. Respect and learn from the community.

Since each subreddit is volunteer-moderated and community-run, there is a wide range of culture, and rules among the various subreddits.

Each subreddit posts their rules, tips, and overview in the sidebar. They are typically straightforward, but all too often new members simply don’t read and follow them.

You’ll learn the most about each subreddit, though, by simply observing and browsing. What posts do the community find most useful? What sparks a big conversation? Is there ever a commercial presence? What type of post gets downvoted?

Like any social network, the real value of reddit is the relationships you can build, especially because it can introduce you to people interested in the same topic.

One generally overlooked feature of reddit is the ability to Private Message another user. Whenever you are interested in getting involved in a community, especially as a brand, you can privately message the moderators of any subreddit to introduce yourself, ask questions, or find out more about the community. They are the ones in charge of flagging spam, abuse, and helping good content get upvoted.

One of the best examples of reddit marketing that I’ve experienced was a Berkshire Hathaway Home Services realtor who privately messaged me and helped solve a real estate problem I had mentioned on a local subreddit.

Notice that the key word though is “deceptive.” Even though reddit uses pseudonyms for usernames, anonymity doesn’t excuse not disclosing who you are or posing as someone you aren’t (i.e. a brand promoting wares as someone who “just found it interesting”).

If you are proud of your brand and think your work is genuinely interesting, then be transparent. Let your work stand on its own merit.

Every reddit username has a history. You can click on anyone’s username and see past comments and submissions.

This fact means 2 things in practice. First, as interesting as reddit can be, don’t go commenting and upvoting on personal threads with your brand’s account.

Second, use it to build a history of contributions to the community. Nothing looks more suspicious than a 1 day old account that has submitted only commercial-related posts.

But a history that’s full of transparent, helpful comments and submissions can build your reputation so that you can engage in conversations and submit useful links.

From the /r/IamA subreddit, which originated the Ask Me Anything concept (which Barack Obama participated in during his 2012 campaign), to /r/ExplainLikeImFive, in which complex questions get broken down and answered in a simplified way, to any topical subreddit where people have questions, Reddit is full of curious people with interesting questions.

No one knows your brand and industry like individuals within your company. Build your history and goodwill on Reddit by being genuinely helpful. Explain complex topics and be the one to help out.

It gives people insight and builds your brand and reputation.

If you are running Reddit ads, the rule still applies. Be interesting; talk to the moderators. Reddit ads are CPM, so if your ad isn’t interesting or useful, you’ll be spending money only to be ignored.

Outside of the official Reddiquette for new users, each subreddit also has rules specific to the subreddit you are participating in; read and abide by them (they are usually found in the subreddit’s sidebar).

In the end, despite the odd user interface and unique culture, reddit at its foundation is like any other social network. It’s a place where like-minded people can come together to talk, share, and discover. And even though the logistics of etiquette may be different than other networks, the foundational rules are the same: respect people, respect the community, and be the type of person or brand that you would want to be around.

Trying to grow my business on reddit with your help. good article

Now is a good time to really learn reddit as it has been growing very popular. great article. Trying to grow my business daly city carpet cleaners.

Reddit is such a great place to find absolutely anything you want, it was a learning curve when I first found it but now it easy to find my way around! Thanks for these great tips, they are super relevant.

Every type of the specifications I have read in the blog and find most of the useful facts which are actually I have read first time. If you have eager to know something new then you can come here easily.

Just new to the world of Reddit and it was very confusing for me to use the Reddit platform. But now I am more than clear about what to do and how to use this platform to get my site hell lots of traffic. Thanks for this marvellous piece of content.