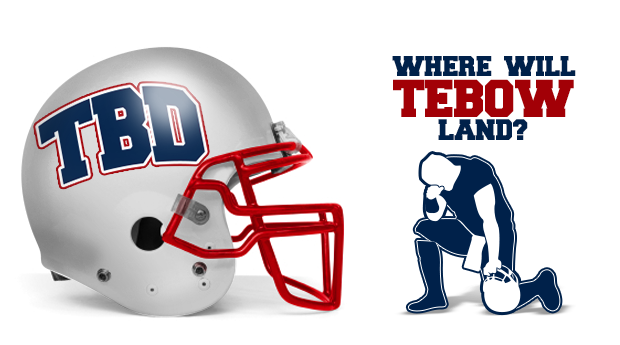 Those poor, poor Jaguars fans. It just never ends down there.

For the record, I don’t think there’s much speculation inside team front offices about Tebow. No one seems to want him. But the media debate persists, and what’s interesting about it is that it’s not a debate founded in Xs and Os. The question isn’t how much Tebow will help a football team (he won’t), it’s whether teams are going to be willing to adopt the hoards of crazed Tebow-maniacs in exchange for some extra publicity and a potential boost in ticket and jersey sales.

Is He Worth It?

At the beginning of the 2012 season after signing with the Jets, Tim Tebow skyrocketed to the top of the jersey sales charts. When it became apparent that he would not win the starting quarterback job in New York and would serve as a glorified clipboard carrier, his sales plummeted… all the way to number 8 (only 3 spots behind the all-mighty Tom Brady).

That has to be a record for a personal punt protector slash backup quarterback.

So, whether you think he’s a saint, con man, role model or an attention whore, the guy has fans. No question about it. And every team in the league could use a player with that kind of star power. So, signing him is a no-brainer, right?

Here’s what most people don’t realize – merchandising revenue in the NFL is split evenly among the 32 teams. A Forbes article from this past winter noted that Tebow jersey sales would need to have grossed over $131 million in order to justify his Jets salary in 2012. (He sure as heck didn’t justify it with his play on the field.)

So sure, Tebow has legions of fans, but signing him means counting on a boost in ticket sales alone to justify the expense and inevitable negative PR.

It’s possible that he could help a team sell tickets, but that’s not a lasting strategy (most teams located outside of Florida and California don’t need help selling tickets anyway). Tebow fans won’t shell out money over the course of a season to see him ride the bench. If a team wants the ticket sales boost to last, they’d have to play him. And playing Tim Tebow isn’t much of a lasting strategy either. Not for GMs who want to keep their jobs.

So, here’s the real question. Would I want my team, the Ravens, to sign him?

No. No way. I think he’s a good guy, and that he has been a victim of his own hype to an extent, but that doesn’t matter. He can’t help the Ravens on the field so I don’t want him on the team. It’s as simple as that.

Would he help put a small market team like the Ravens in the national spotlight? Sure he would, especially when QB Joe Flacco has a bad game and hot-headed fans and analysts start calling for a change at the position. But I feel confident in speaking for Ravens fans everywhere when I say that it is not the kind of attention we want or need.

Short-term PR wins aren’t something you want. That’s why the bottom dwellers in sports (and business for that matter) are the bottom dwellers. They make short-sighted moves, shell out top dollar for big names, and generally prioritize ticket sales and PR over winning. The best franchises in the league tend to be the ones that win the most games and the most titles (shocking, I know). And that starts by putting a great product on the field for the fans. Not generating buzz.

It all ties back, as always, to adhering to a smart marketing philosophy. Tim Tebow is the NFL version of link building. Sure, he could boost a team’s “Page Rank” in the short-term, but what would they really be gaining? A bunch of bandwagon fans that will only stick around to see Tebow get in the game?

Long-term brand success comes from putting out a great product, building loyalty, and bringing in the right audience – not just the largest.

Our advice to brands? Leave the Tebows of the world alone – you’re better off without them.