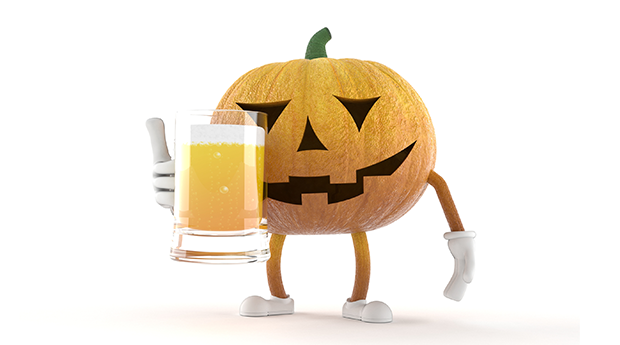 When craft beer mart Hop City announced its first shipment of pumpkin beer for the 2015 season on July 24, the reception was mixed. Hop City is a favorite of Atlanta’s serious beer drinkers, and some among them thought July too early to roll out the seasonal ale.

One @aboveavgbeard, a CPA with an awesome beard (his description, not ours), tweeted “Seriously?!?! it’s JULY.”

@D_I_N_G — an Englishman blogging, bitching & moaning about the absence of beer culture in Atlanta — tweeted “Send them back. #hallmarkbeers.”

The day of the week is important because we have a weekly event at Nebo called Beer Friday. At 3 p.m. a small group of five or six go to Hop City, which is around the corner from our office, and buy beer. When they return with the haul, we crowd the kitchen, pick apart boxes and six packs, and call dibs on bombers. The rest of the afternoon is spent “working,” playing ping pong, and re-introducing ourselves to the people who work in design and development. It’s a nice tradition.

But Friday, July 24, wasn’t like other Fridays. Within the mix of craft lagers, Mexican ales, IPAs, and stouts was a six-pack of pumpkin beer. The reception at Nebo was not mixed.

Some people laughed. Some were angry. Most refused to drink it, but the ones who did made a point to let everyone know it didn’t taste good, and they only drank it for the novelty, or for the reason we do most things — to be ironic.

This is an office that loves Old Milwaukee and PBR. We’re not sticklers for quality. We celebrate rosé. We take no issue with drinking on trend. But pumpkin beer crossed lines of both taste and tact. Pumpkin beer’s big July debut left us upset and confused. The Atlantic says pumpkin beer is divisive. In our case, it wasn’t. Only one person defended pumpkin beer, and no one stood to defend that person.

Pumpkin beer may have ridden the fall-fever coattails of the Pumpkin Spice Latte to mega popularity in the last decade, but its history dates back to the Pilgrims. This is a fact pumpkin beer enthusiasts are quick to remind you of. Because pumpkins were everywhere, and life as a Pilgrim was stressful and aggravating, they made beer out of their pumpkins.

Pumpkin beer as we know it today, the flavor preferred by Mr. Autumn and Brian Alsobrook, arrived much later in 1985. This is pumpkin beer made with cinnamon, nutmeg, and allspice. The first batch was brewed by Bill Owens, founder of Buffalo Bill’s Brewery in Hayward, Calif. If you’re interested in the history of pumpkin beer, there’s an interesting article about Mr. Owens and the rise and reign of pumpkin beer in All About Beer Magazine.

The article is more than 2,000 words long and touches on pumpkin beer’s history, the brewers who perfected the taste, and the events that popularized it. Yet readers hung on one phrase:

...pumpkin beer seeps into summer and arrives on shelves in the middle of July…

Readers weighed in. Their opinions ranged from “A bit too early” to “This is not beer. It’s crap.”

More than anything, people are pissed off about timing. But why?

Travel back with me to that Friday afternoon in the Nebo office. In the same batch of beers, we had a thick stout with an old bearded man on the label that is made to be sipped warm. A cold weather beer by any definition. It was 91 degrees in Atlanta on July 24. Yet, stout inspired no anger.

Full disclosure: I’m not a beer drinker. I have no opinion on pumpkin beer, and I had to Google the names of other types of beers, because I don’t know them (and details are important). But I know how group dynamics work, and I knew that if I wanted to make fun of Brian, the office would back me up (remember, not only does Brian like pumpkin beer, but in July he was also very new to Nebo). But in this rare instance, instead of making fun of what I didn’t understand, I decided to investigate. I sat down with Brian Alsobrook to find out what’s the deal with pumpkin beer.

“People make fun of my pumpkin beer all the time,” he told me.

Without exception, Brian is teased when he shows up with a six-pack of pumpkin beer (and that’s the correct word, teased as a child teases). And more often than not, Mr. Jokey Jokey is drinking a PBR, a Bud Light, or even a Keystone Light. Brian says it doesn’t bother him, and he stands strong in his convictions.

As someone who often doesn’t, I was impressed.

When asked to explain why I like what I like, my answers are as simple as they are superficial.

My Reasons for Liking Things

3.     My dad doesn’t know how to pronounce it, and eating it makes me feel like I’m my own man

When I asked Brian why he likes pumpkin beer (keep in mind, this is a dumb question, you wouldn’t ask someone why they like pizza), he had a valid, and thoughtful answer. The short version is this: his college roommate worked at a brewery and brought pumpkin beer home for free. Brian drank it a lot and grew to like it. That’s a great reason to like something!

A few things to note — Pumpkin beer doesn’t remind him of fall or college football. He doesn’t wear a sweater, a beanie, and scarf when he drinks it, and he doesn’t care if there’s real pumpkin in it. Brian would drink pumpkin beer in the spring if it were available. He digs the stuff.

The other thing to know about Brian is he’s a beer drinker’s beer drinker. Dude knows his brews.

We preach authenticity at Nebo. We preach it to clients and employees alike. Authenticity is the answer to communication problems, product problems, and relationship problems. Be your authentic self.

Pumpkin beer has grown in popularity in the last five years, and has become a polarizing issue in the beer drinking community. Some brewers use actual pumpkins (like Rogue’s Pumpkin Patch Ale), some don’t. There are pumpkin sours, light pumpkin beers, dark pumpkin beers, ones with high alcohol content, and ones with no alcohol.

Some serious beer drinkers like Brian love it. That’s why Hop City has more than three shelves of the stuff from July to November.

To the ones who hate it, the @aboveavgbeard and @D_I_N_G’s of the world: I think you are wrong. Beers are not empires or Highlanders. The rise of one doesn’t mean the fall of another. “There can be only one” does not apply.

Used to love getting pumpkin ale from Cottonwood Brewery when I was in college in late 90's early 2000's. In those days the pumpkin spice latte wasn't yet at thing and decorative gourds were still called squash.

Nothing wrong with a pumpkin ale. Keep up the good fight Mr. Alsobrook. I've got your back.