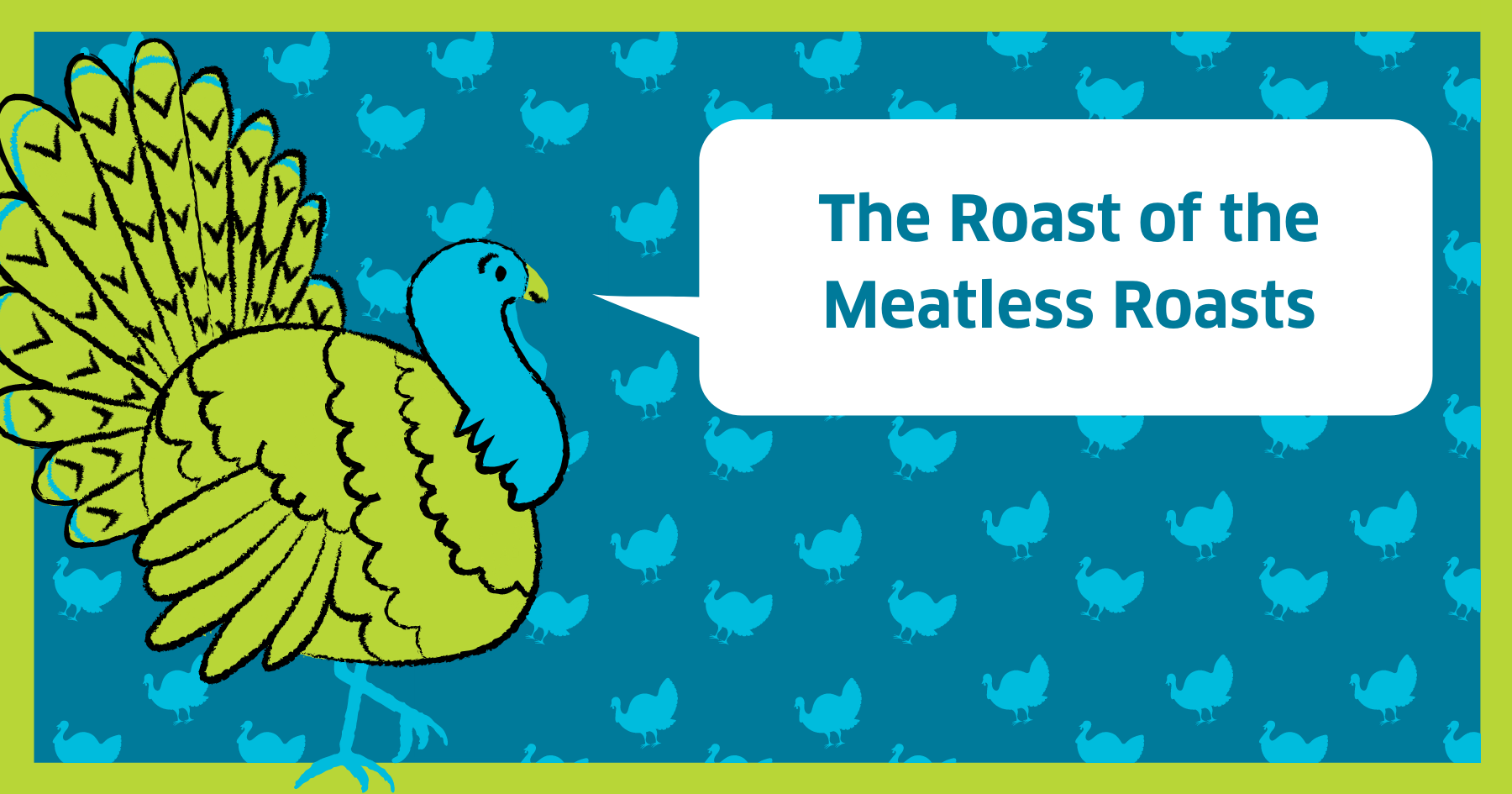 How can you tell if someone is vegan?

Alternative punchline: invite them to Thanksgiving. If the only dish they touch is canned cranberry sauce, you’ll know. Unless you’ve got a plant-based turkey on hand, that is — and these days, you actually might.

In the last few years, meat-free food has undergone a major rebrand. Vegan is dead — and if you ask me, good riddance. In its place is a shiny new rebrand: Plant-Based. Ushered in by the tastebud-defying likes of Beyond Meat and Impossible Burger, meat-free options are not only bountiful these days, but actually palatable. Like, so fucking good, even my meat-loving aunt digs in.

In the New Era of Plant-Based, the days of pecking at green beans at the holiday table while my mom explains to everyone I am “vay-gun” (which is not even true, but I’m not about to argue) should be long gone. But alas. For all the newfangled plant-based options out there, not many meat-free holiday roasts have made the same innovative leaps.

I know, because I ate five of them this month.

Some slapped. Others merely sufficed. And one went directly into my trash can. Find out which meat-free holiday roasts to enjoy — or avoid — for Thanksgiving and beyond.

This Whole Foods-brand dish is the first plant-based holiday roast I’ve ever tried, and it’s a good introduction to the genre. Like many of the plant-based roasts, it follows the format of breading on the outside, white “meat” on the inside, and stuffing in the middle. It weighs a shit ton, which bodes well for feasting.

Cooking this roast is relatively simple, and upon opening the oven I’m immediately hit with a warm wave of stuffing-scented nostalgia. The gravy comes in a plastic bag and smells like gravy, but also like plastic bag — and sadly the taste isn’t far off.

As for the roast itself, the stuffing tickles the memory of stuffings past, complete with cranberries that brighten the flavor. The “meat” part is moister than turkey, but ultimately flavorless. And now that I think of it, maybe that’s what they were going for? Disclaimer: even when I did eat meat, I never was a turkey girl, and who really is? It’s the least flavorful part of Thanksgiving dinner. So if they were trying to imitate the blandness of turkey, this roast is true to form.
I don’t dislike it, but this is Thanksgiving. I need something to stuff my face with, and this ain’t it.

TL;DR I liked it, but I made a baked potato with this meal that I enjoyed more. Speaking of, did you know McCormick Bac’n Bits are vegan? They might be the real fake meat star of the show.

Though they’re not always vegan, I’m a big fan of Quorn’s other meat-free foods made with their proprietary mushroom-based Mycoprotein that reduces land and water use. But when I open the box of their meatless roast, I am immediately turned off. It looks like a giant, plastic-wrapped sausage, and the instructions say to leave the plastic on while it cooks, which feels wrong. After about 60 minutes in the oven, I smell something burning. Not to worry — though the plastic wrap is engorged with juices and hot air and threatening to pop, the roast is intact. It’s just burnt juices that have totally ruined my baking sheet.

Peel off the plastic, and this sausage-fest turns out to be a turkey delight. The texture and flavor are on point, and it’s a little juicier than a real turkey. This roast really brings back memories, and I wouldn’t be completely ashamed to serve it to my meat-eating loved ones on Thanksgiving day. The price is right at $8.99, and the only drawback (aside from not being completely free of animal products) is that it doesn’t come with gravy, so you’ll have to make your own. Topped with some cranberry sauce or whatever else you fancy, the Quorn Meatless Roast will complete your vegetarian holiday spread.

TL;DR Don’t judge a fake turkey by its plastic sack. This roast slaps.

My first red flag should have been that this roast is called “vegan” and not “plant-based.” But I’m tired of eating fake turkey for days on end, so I ignore the alarm bells and decide to mix things up with the equally beloved, but lesser touted seasonal classic: a holiday ham. Surely, at a whopping $30 and 500 pounds, the hefty Vegetarian Plus Vegan Ham Roll will be worth the price.

Upon opening the package I was met with a second red flag: it looks like a foam roller meets a party favor from Hollywood Hustler. What’s more, cooking it is a two-hour pain in the ass. I award it one point for replicating the cooking of real ham as I take it out of the oven every five minutes to glaze and glaze again. The glaze smells like cinnamon red-hots, sweet but spicy. And that’s about where the good news ends.

This ham is a time machine to the medieval days of veganism. When I cut into the roast, ropes of fake meat pull apart, almost like melting string cheese and exactly not at all like ham. Eating this ham is like chewing a wad of salty bubble gum that slowly dissolves into soggy cardboard, while thinking really hard about the memory of ham. My husband took one bite and spit it out. I tried to give it to my dog but she didn’t want it. We threw the remaining 499 pounds of it into the trash can, and then set the trash can outside our front door.

This ham is the reason people hate vegans. This ham could turn a vegetarian into a meat-eater. This ham is a crime against humanity, as well as pigs.

TL;DR If you want to experience what vegan food tasted like ten years ago, get this ham. And the next time you see an old, grizzled vegan, give them a pat on the back and thank them for their service.

Founded in 2003, Gardein has been a staple of the plant-based community long before plant-based ever existed, which makes their wild rice and cranberry-stuffed roast a vegan holiday classic. But does it hold up against the new turkeys on the block?

Right off the bat, it’s more pleasing to the eye than the rest, as the naked fleshy bits have been modestly covered with an herb-laden crust. The crust turns out a little too crusty, but it comes with gravy, and the gravy is pretty damn good.

The roast itself won’t offend anyone, but it won’t convert them to the veggie side, either. It’s hard to tell the “meat” apart from the middle, which means it tastes mostly like bland stuffing — that is, it tastes like bread. Much like bread, this roast would be best used as a raft to deliver other, more flavorful Thanksgiving sides to your mouth.

TL;DR As a stand-alone dish, this fails to impress. But no dish at Thanksgiving was ever meant to stand alone, was it?

Made with sage and garlic-and-bread stuffing, the Field Roast Celebration Roast promises to be less bland than its peers. Plus, it comes with porcini mushroom gravy in the form of a powder, which you can mix with hot water or snort directly with a rolled-up dollar bill.

After a lengthy time in the oven, the Field Roast smells like a sausage — no surprise, since Field Roast specializes in sausages — and it tastes like one too. The flavor is unique in terms of vegan holiday roasts and stands out from the rest in that it actually has a flavor. The problem lies in the gravy.

The porcini mushroom gravy is thick and aromatic with some dehydrated mushrooms that plump to life with water. And it is salty as fuck. One bite in and my blood pressure jumps 100 points. There are certain things that reach a point of diminished return, and sodium is one of them. Too much salt is worse than none at all. This salty gravy burns everything it touches —
my tongue stings even as I write.

TL;DR If you like sausage, this roast is a go. And if you like salt, you can destroy your body more quickly with the gravy.

Due to supply chain issues, I couldn’t get my hands on this time-tested plant-based turkey. But this article wouldn’t exist without the inventor of the genre, Tofurky. They’ve been in the turkey game since 1995, and so I have to give them credit.

According to legend, the Tofurky roast has the most turkey-like texture and flavor of them all. I asked around, and Tofurky fans agree. Plus, it comes with all the fixin’s — stuffing, gravy, and this year, even a vegan chocolate mocha cheesecake.

TL;DR They’re the ones who made turky happen. If someone manages to get their hands on this, I’ll gladly receive it by snail mail.

Who takes the W in the battle of the roasts? Tofurky, by default, wins for making meatless roasts possible. But of the ones I tasted, I have to give the Quorn Meatless Roast first place. It’s the only one I would buy again, though it pains me that an animal product-free roast didn’t take first place. That honor goes to the 365 by Whole Foods Roast, which I hope gets knocked out in a plant-based utopian future by a juicy Beyond or Impossible contender.

At the end of the day, what I learned on my fake turkey journey was this: the best way to convert someone to the plant-based life is to feed them a month’s worth of vegan holiday roasts. They’ll never want to touch meat, fake or real, ever again.