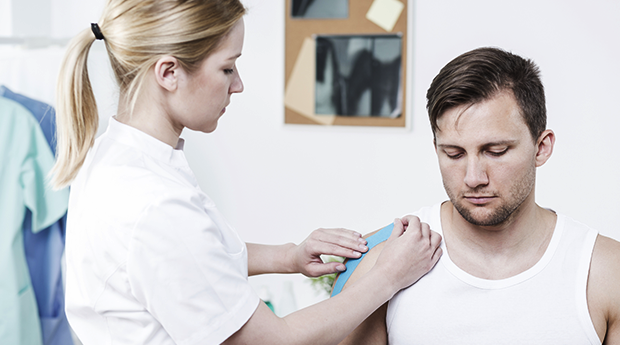 Nerve damage is a recurring story in my life. I injured my lower back playing baseball in high school, coped with nerve pain on and off throughout my running career and, more recently, temporarily paralyzed my foot after what I’ll pretend was an epic and daring feat (it wasn't).

So when this past July rolled around and I found out about another case of nerve damage, the news wasn’t too hard to stomach. I’d been in the situation before. I knew the best- and worst-case scenarios. What was hard to stomach, however, was how it all began.

Yes, you read that right. I pinched a nerve in my neck by falling asleep on the armrest of my couch more than three years ago.

Of course, I didn’t learn that’s what happened until I started physical therapy. I knew the injury was different from anything I’d dealt with before. For one, I didn't know it was nerve damage and spent the better part of those three years treating a compressed nerve like a torn muscle. Spoiler alert: That doesn’t work.

Fixing Things Is Not My Strong Suit

I’ve been wrong plenty of times in the past, but this wasn’t a matter of simply being wrong. It was a matter of being wrong and unknowingly doing everything possible to make the situation worse.

For instance: Whenever an ornery bout of pain would kick in, I’d take ibuprofen and use my left arm and shoulder as little as possible. Though this reduced pain and swelling, it was actually a bad move on my part. The ibuprofen made it difficult to notice what was causing the pain to flare up, and the lack of use made my shoulder weaker — compounding the problem in the long run.

It all makes sense though. My default is to take on each problem as if it’s the only problem. I tend to forget that some problems — though they may seem major in the moment — are just signs and symptoms of something more complex.

My shoulder pain is a perfect example. I was so caught up in addressing the symptoms that I completely missed what was going on. The thought that there might be something more to it never crossed my mind.

Oddly enough, that all changed when I read one of our blog posts about pushing back on client feedback. At one point the post talks about respecting experts and their recommendations, especially when you only understand the basics of what they do.

At the time, I wasn’t working with any experts to figure out my shoulder. I played baseball long enough to know the difference between overuse and serious injuries. I knew the basics of treating upper body injuries — or at least that’s what I thought.

But after three years of self-prescribed treatment and little to show for it, something needed to change.

I Knew Enough to Know I didn’t Know Enough

With all the information we have access to today, it’s easy to assume we should be able to fix anything on our own. But you know what? That’s completely insane. We’re allowed to not have all the answers. We’re allowed to need help from other people. It’s called being human, and it’s something we often forget.

That lesson hit me with the grace of a cinderblock. Who would have thought experts with years of schooling would be able to find the source of my pain with only a handful of tests? They did more in one hour than I managed to do in three years.

Not only did they pinpoint the source of the pain, they also explained how the initial injury moved on to impact the rest of my shoulder and upper body. And then, after listening to how I attempted to remedy things on my own, they walked me through what effective recovery would look like.

Recovery is in the Details

I should reiterate that I spent far more than a few weeks doing physical therapy — and for good reason. We quickly learned that the injury itself wasn’t so much a freak incident as it was a culmination of a lot of negative habits I’d developed.

My doctors asked me to take a critical look at every single routine in my day-to-day, such as how I play guitar and how I sleep at night. They told me to look at what actions preceded bouts of pain and which ones relieved the tension.

After three months, my life looked completely different. I fixed my posture, changed the way I drive and switched up the places I sit while working in the office. It’s incredible how the smallest details can add up and have an impact on that scale.

Patience Is a Virtue (I Don’t Always Have)

It’s been three and a half years since that fateful injury and four months since kicking off physical therapy. Without a doubt, this has been the most bizarre experience I’ve ever been through.

Recovery hasn’t been quick by any means, but I’ve seen progress. And you know what? That’s more than enough for me. If I’ve learned anything from this (apart from never sleeping on an armrest) it’s that patience really is everything. And it’s something we can always use more of.