My Inexplicable Love and (Unhealthy?) Obsession with Football 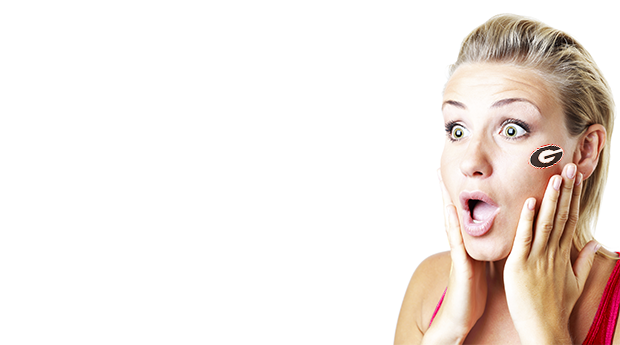 Let me start with a disclaimer: I freaking love football. I look forward to the start of the season and mourn when it’s over. I prefer college ball to the NFL, but I’m starting to come around to the pros. I play Fantasy Football and actually do my research and set my line-up. It’s just great – it’s all just great.

Now as a marketer, I pride myself on understanding why people love certain things. It helps me create content and messaging that empower the consumer and help them during their decision cycle.

So, you can imagine my surprise and terror when I realized, I have no idea why I love football.

Here’s what I do know:

If UGA loses to South Carolina, it ruins my whole day. I have a sick feeling in the pit of my stomach and I can’t resist the urge to curse at Steve Spurrier, or any Gamecock fan who crosses my path.

Side note: even though The Ol' Ball Coach (ugh, gag) is retired now, I’d still stomp on his foot.

And when UGA lost to those horrible jean-short-wearers just a week ago, I was so horrified with our performance, and by the smirk on my boyfriend’s face (he’s a Gator fan), that I had to leave the room for the last few minutes of the game.

Here’s the real kicker though: I have absolutely no control over the game. None. And yet, I am so invested in it that a win or loss can affect me mentally, emotionally, and even physically.

So I got to thinking.

Maybe I’ve been brainwashed by the NFL.

Is it impossible? No – their advertising is on point. It’s like they’re talking to me! But is it probable? Absolutely not.

So I really started digging in. And it turns out… I still have no idea. I debunked every reason I could come up with:

Is it the feeling of belonging to something bigger than myself? I feel like I could probably belong to a lot of things that have a greater impact on the world besides furthering the number of concussions that happen each year.

Is it because I grew up with a brother who played football and I got to cheer for him? Hmm, that’s touching, but I think I’m out of that sentimental phase. Sorry, Billy.

The tradition? I can’t deny I love tailgating and wearing red and black on game day. But couldn’t I just have a weekly cookout on my street? And maybe I’ll make everyone wear my college colors.

The competition? Well, I could think of plenty of competitive things I could get excited about that don’t feature grown men in uniforms launching themselves at each other at full speed while I yell and scream and wave my hands.

Some people feel the connection because they played. No response. This is a self-reflection post, Katelyn.

What about the brain research? Yes, that. I guess I could blame it on testosterone levels.

I could go on, but I’ll resist the urge to brain dump on you poor readers. I think you get the point.

I don’t know why I love football, and I don’t care. What I do care about is when you send me an ad that features a Gator jersey, therefore turning my newsfeed a hideous blue and orange. Stop it.

But that’s just me. What about the other million football fans? What are their reasons?

You see reader, we all have different connections to things in life. Some of us love the same things for completely different reasons. As consumers, this is just our way of life. As a marketer, I think it redefines how we go about our jobs. It makes customers real. It makes customers complicated. And it makes marketers better, because we accept those emotions and irrationalities and find a way to empower customers and support their complexities. After all, we’re consumers, too. We’re all a bit complex.

Nothing inexplicable about it! Because...football!

Love it! This reminds me of a similar piece another female writer friend wrote: http://www.salon.com/2015/10/24/im_a_feminist_with_a_football_obsession_im_interested_in_the_way_we_love_things_that_arent_good_for_us_chocolate_booze_narcissists_football/

I wouldn't dismiss the "sense of belonging" quite yet. Do you think you'd still be a fan - of anything - if you were the only one and would always and forever be the only one? It wouldn't be very fun. Most of the best parts of sports fandom, or any fandom, are the shared moments: celebrating together, rubbing it in the face of rivals (another unifying force is opposition), analysis and review, etc. You put on the jersey or the hat or the bumper sticker to not only share your allegiance, but to create a connection.

It isn't quite as simple as all that, but I think fandom is a very human and very social phenomenon that holds value because of the relationship a fan has with other fans.