How to Win Enemies and Influence People Who Hate You 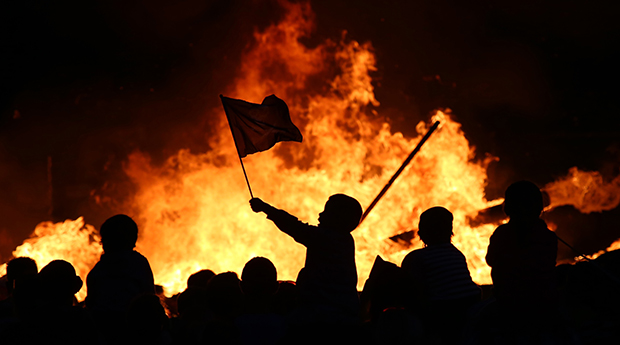 Five years ago I lived in an anarchist commune, and to say I hated marketing would be an understatement. I thought capitalism was rigged, McDonald's used subliminal messaging to prey upon babies, and CEOs were puppeteers of the American sheeple. To avoid giving our money to The System, we dumpster-dived for food, collected our own rainwater, grew our own gardens, and — I’m ashamed to admit — many of us shoplifted.

Let me pause to say that stealing things is not cool, ever. No matter how many employees between a company’s CEO and the product on the shelf, shoplifting robs people of their hard-earned money. My point is that refusal to support big companies is an integral part of anarchism, and yet, there is something deeply ironic about the whole subculture:

Not American Spirits? Not smoking them. Thrifting for a jean jacket? Look for Levi's. Off to shoplift shoes? They must be Vans.

So how exactly did marketers turn the ultimate skeptics into brand-name devotees?

By telling the truth.

Across the street from the commune house, my roommate graffitied a dumpster with the words “We are the disillusioned.” Super emo, I know, but she had a point. At its etymological roots, the word disillusioned means, “I ain't falling for your crap no more.” We were right that companies were feeding us lies, but not in the nefarious way we suspected. In today’s media-drenched world, there are countless shrill commercials and ugly billboards that are more focused on seizing attention than touching human truths and desires. Untruthful marketing ranges from annoying to depressing, and in the din of hamsters in hatchbacks and blonde moms dazzled by air fresheners, it can feel pretty soulless.

In 2009, Levi’s launched the Go Forth campaign by Wieden+Kennedy. Go Forth was ruthlessly soulful. During the worst year of the economic recession, the campaign focused on a message that rang true not just for anarchists, but for many young people. As we struggled to find jobs and pay student loans, Levi’s acknowledged the poor and middle class of America, the adversity we faced as a country, and even our anger toward the rich. Mixing political images with shots of young folks hopping trains, making out, and running wild into the night, Go Forth did more than make jeans look cool. It struck a basic human truth: that we want freedom.

At its heart, freedom for self and others is what anarchism is all about. America had lost some of its freedom, and we wanted it back. We spent as much time feeding the homeless and protesting for social justice as we did vandalizing stop signs. Go Forth captured freedom in all its facets, from class struggles to the wild beauty of not giving a fuck. Hate brands all you want, but freedom — that's a human truth.

Go Forth is one of the few campaigns that gave me the chills the first time I saw it. Another is Dove’s Real Beauty campaign.* Real Beauty launched when I was in high school, and I loved it. The campaign didn’t show perfect women rubbing their silky soft skin. It touched on the true experience of being a woman, the desire to be beautiful and all the insecurity and fear that comes with it. In the minute and 14 seconds it took me to watch this commercial, I was converted from a beauty-product skeptic into a brand-loyal Dove customer. I immediately asked my mom to stop buying other soaps and switch to Dove. Now that’s the kind of power that every company and agency envies.

Ten years later, not only was the Real Beauty campaign still in full swing, but it continued to nag at the back of my mind. I was working on my master’s degree in writing, had outgrown anarchism, and started paying for meals instead of digging through the trash for them. But I was still wary of companies and advertising. The Dove campaign was the first step in my transformation from cynic into aspiring copywriter. It made me realize that I didn’t hate companies — I hated bullshit. Great marketing doesn’t lie or manipulate because it doesn’t have to. It seeks the human experience that consumers and organizations share and helps people find businesses that align with their values and desires.

Of course, telling the truth isn’t all there is to great marketing. How you tell the truth is crucial. You have to be surprising and engaging, take what people already know and spin it anew. But that’s a matter of craft and creativity, a topic for another day. My point is that if you can win the cold, black hearts of anarchists, you can successfully market to anyone. Starting with a basic human truth lays the foundations for a powerful campaign, and you may end up with a platform you can build on for years.

At the end of the day, if you want win customers, tell the truth. And if you want to make actual sales, don't market to anarchists.

*And I have to throw in a third one, because I love it too much not to mention: "Jane" for Sprout by HP.

I strongly dislike marketing and do not trust it. I do not watch television and every time I am bothered by an ad online, I vow to never buy that product.

You often leave out the anarchist part when telling your life's story. Thanks for the insight. I think all good storytelling, fiction or non, starts with the human truths you describe. I think we get caught up in causes, which set up black and white thinking. We do it in our day to day lives, too - I'm a good person or bad one, a good mother or a bad one. Rarely is there any truth in that.

Nice job with the writing here, too :) Looking forward to your next blog.

Great post. I feel that people want to believe in something and that anarchy is that empty void where the poor souls are lost and in search for meaning.

Great marketing is about connecting. It is having that authentic message that feels like the brand is speaking directly to you. It is not about shaming someone because they do not have the same aspirations of beauty and it is not using celebrities to create false connections.

It is providing something that is genuine. Tha=is is why the three ads you show all work. They connect.

I believe that this connection can take place in a B2C or B2B space. It does not have to always be on a deep emotional level but, when it works, it tells the end user/consumer/reader that you understand where they are, what concerns they have and can offer some solutions to the challenges that they face.

Please keep up the great writing.

"Great marketing doesn’t lie or manipulate because it doesn’t have to. It seeks the human experience that consumers and organizations share and helps people find businesses that align with their values and desires."
Brilliantly stated and just plain true. Thank you!

yours is one of the first blogs i've read all the way through for a long time. I totally see where you are coming from on all assets of your article, and I FUCKING love it! I love the way you write, and I love the perception of the youth today you capture.

I'm married to someone who calls themselves an Anarchist, and I've actually learned more about what this term meant in the past two years than I ever have before. I totally agree with what you're saying, all anarchists do want is Freedom, as it is our personal universal right to have it. Some do choose to do destructive things like shop lift, and it is an eye for an eye action, but I don't think we should feel guilty for what we have done.... if you see the bigger picture, the bigger companies are playing a power and control game, and in the previous years they have made it a struggle for "lower classes" to rise above, out of their own fear of loss of power, loss of mind control. True, shop lifting is totally hipster, and not cool at all. ;)

If anything, I would say we need to move toward a Sacred Self Governing system, where everyone is empowered in who they are and take full responsibiltiy for themselves. That is the community I am looking to build, a community that breeds love on love on love.