Holiday Ad Classics To Get You Ready for Cyber Monday 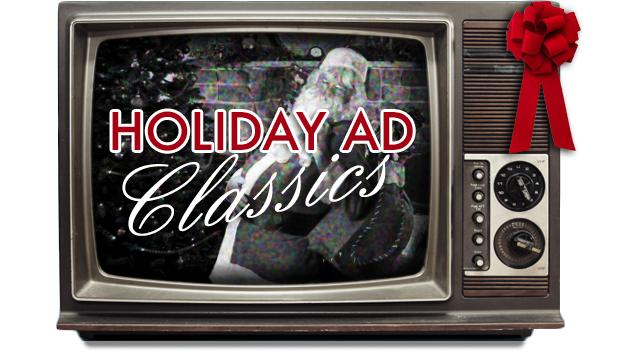 They say that the holidays, particularly Christmas, have become all about commercialism, but we say that it's really all about the commercials. Here is a list of some fantastic Christmas and holiday ads to warm the heart and make you jolly. As ubiquitous as Best Holiday Ad lists are, so are the ads themselves. It just wouldn't be the holidays without either one, so enjoy!

Here's one you might never have seen from ad agency TBWA\Vancouver. If this idea were for a client who actually buys TV ad time, it would be a holiday classic.

Sometimes the message is just "Merry Christmas." This 1981 commercial for High Life eschews voiceover and dialogue, instead letting the viewer infer through an instrumental "I'll Be Home for Christmas" that the horse-drawn sleigh is bringing them back to the one place they know they're loved. It's an amazingly tender sentiment, especially from the same company that brought the world the equally brilliant one second Super Bowl commercial.

This is another beautiful ad that excels in its simplicity. The concept of "'Tis better to give than receive" is ancient, universal and embodies the true spirit of Christmas.

In a world where flame wars are waged over whether or not Santa is on the Christmas Coke can, it's nice to see that some ideas unite us all, like the idea of coming together and choosing family over work. Despite the terrifying metaphysical implications of a universe existing within and being subject to the whims of another universe, this ad by Coke does a great job of urging us to reconsider our priorities.

Again, Coke's science is less than sound. But if you can accept the preposterous premise that these penguins floated up from Antarctica to the North Pole on a chunk of ice to hang out with some polar bears and not get mauled by them, then this ad is a brilliant anthem for peace on Earth. Plus it's got The Beach Boys.

Back in the 90s, Michel Gondry directed a series of winter ads for The Gap that were beautifully shot and choreographed, but the best had to be the one for kids. It's got New Edition.

This bizarre ad doesn't necessarily get you in the holiday spirit, but it's pretty hilarious, and you'll find yourself wondering, "Is that Steve Buscemi and Norm Macdonald?"

Honestly we don't get what all the fuss is, but we've always heard from people who were around for it that the 'Santa riding on a razor' commercial is a Christmas classic. Whatever.

This ad is impressive not just for coming up with a clever way to say, "Come together. Peace on Earth," but also for getting the rights to all these iconic movie characters. It must have been expensive, but the payoff is undeniable.

We end with the obligatory "Peter Comes Home for Christmas" Folgers ad that appears at the top of all such lists. It's sappy, heavy-handed and undeniably 80s, but if anything gets people in the Christmas spirit, it's nostalgia.

Did we forget your favorite? Were you perplexed by some of the choices? Outraged that the M&M's meet Santa commercial wasn't on here? Let us know! We'd love to hear your fondest memories of these or other holiday commercials.

"
Gap
Back in the 90s, Michel Gondry directed a series of winter ads for The Gap that were beautifully shot and choreographed, but the best had to be the one for kids"
I disagree, read:
http://chuckmorrishomes.com/2015/03/10/galveston-monthly-remarkable-rescue/

April 13, 2022
A PR Mastermind: The Kris Jenner Effect
March 8, 2022
Breaking the Bias This International Women’s Day
We do it for the gram
Like this post? Share it!
Back to the Blog