How French Fries Became the Default Side Item 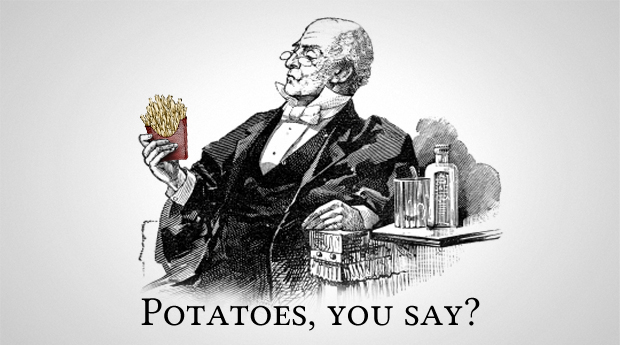 Walk into any American fast food restaurant, look at the Sides menu, and you’ll see it:

French fries. Right at the top of the list. Every time.

A burger and fries is the most uniquely American pairing this side of hot dogs at the ball park, but the reign of French fries as the side item of choice extends way beyond just burgers. Sandwiches, fried chicken and pizza all seem to taste a little better when paired with a basket of golden fried potato wedges. The question is, how did this become the norm? How did French fries become the default side item for, well, everything?

As an agency focused on brand, naturally we assumed that it was some sort of marketing angle; but as it turns out, side item French fries were more a product of circumstances. It all started in France (surprise!), hundreds of years ago. See, while French fries might be one of the most popular dishes in the country today, it wasn’t that long ago that potatoes were deemed nearly inedible by most of the world. Prior to the early 1700s, potatoes were often referred to as “edible rocks” and treated as emergency rations to be eaten under only the most dire of conditions. The rest of the time, potatoes were hog feed.

Then, along came Antoine-Augustin Parmentier. While serving in the French army during the Seven Years’ War, he was captured by the Prussians and thrown in jail indefinitely. There, his captors fed him potato after potato after potato until a strange thing happened; Antoine became a potato fanatic! Upon his return to France in 1763, he couldn’t wait to tell everyone about how great potatoes were. Unfortunately for him, no one seemed to care. Potatoes would remain hog feed, at least for a few more years.

Not one to give up easily, Parmentier eventually crafted a complex and brilliant campaign to spread word of the awesomeness of the potato. He pitched them to French royalty. He allowed peasants to steal them from his crop. He optimized his keywords to obtain better organic search results (okay, not really). To make a long story short, he succeeded and, with the help of a nasty crop famine or two, by 1785 potatoes were being grown all over Europe.

Plenty of debate exists about who the first person was to slice a potato into wedges and deep fry it. Some say the practice originated in France; others say Belgium. One thing that’s certain is that the street snack became immensely popular by the early 1900s, such that U.S soldiers serving in World War I were returning home with a hankering for the salty treat.

Now, here’s where a certain amount of serendipity comes into play. In America during this time, we were witnessing the birth of the modern fast food restaurant. White Castle began serving burgers and cola as early as 1916, and they must have heard the clamoring from those hungry soldiers because they became one of the first American institutions to serve French fries.

30 years later, a couple of guys named McDonald decided to open a burger joint that would be faster, more efficient, and cleaner than anything that had come before. They, too, adopted fries as the primary side item and never looked back.

The potato had finally arrived.

Ultimately, timing was crucial to the success of the French fry. When America’s first fast food chains opened their doors, and the hamburger was just beginning its rise to power, restaurant quality food became available to some people for the first time. Early entrepreneurs knew this, and were constantly looking for ways to keep costs down so they could appeal to these new, lower-income customers. Potatoes were cheap and could be stored for weeks on end.

Not only that, but deep frying potatoes was a difficult thing for people to do at home. To get French fries, you had to go out. And going out meant eating on your feet, as many early fast food joints lacked seating for customers. Rather, patrons would order and grab their food from a window. For this reason, menu items needed to be portable and easy to eat on the go. Once again, French fries fit the bill.

It all boils down to one simple fact. That is, a hole existed in a fledgling market and fries came along just in time to fill it. They managed to meet the needs of customers and business owners alike, getting in on the ground floor of fast food and quickly cementing their status as the gold standard of sides.

And it didn’t hurt one bit that they’re delicious.

My only favorite game is this euchre card game and i am crazy for this. With this Homepage or platform am enjoying without download or for free. Thanks for advance fun and enjoyment.