Dog-Friendly Offices: 40,000 Years in the Making 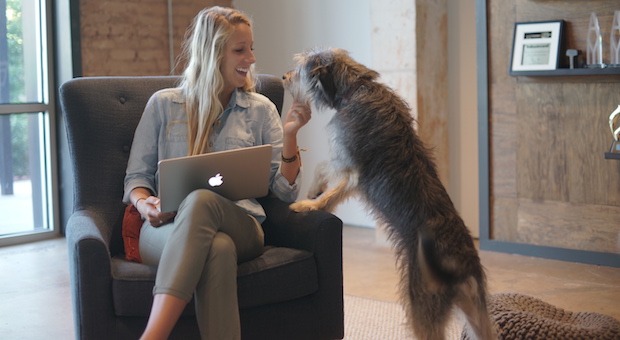 From Ping Pong tables to ball pits to closets full of LaCroix, no industries are more envied for their office perks than advertising, marketing, and tech. But there is one perk that is more coveted than them all: office dogs.

At companies like Amazon, Mashable, and Google, office dogs are redefining what it means to be a “working breed.” A quick Google search will tell you it’s because dogs in the workplace increase employee happiness and retention. They ease our stress, encourage us to take breaks, and boost our creativity. These are all fine reasons to explain why dog-friendly offices are becoming more popular, especially among creative industries. But I suspect the real reason we love office dogs is much deeper.

That’s why, in honor of National Dog Day, I’m digging deep into the connection between canines and creatives.

Humans’ relationship with dogs has always been a working one. Let’s go back for a minute — like 40,000 years back. That’s when humans first domesticated dogs or rather, as some researchers believe, dogs domesticated humans.

We often think of ourselves as having tamed dogs, but there is a theory that suggests the taming was mutual. In fact, researchers go so far as to say dogs played a major part in humans’ evolution from hunter-gatherers to farmers. Like all good things, humans’ relationship with dogs began with free food. According to researchers Brian Hare and Vanessa Woods, authors of The Genius of Dogs, dogs probably began hanging around human dwellings for the sweet leftovers and bountiful garbage. It’s likely that dogs then began following humans during the hunt because they knew there would be free food. The relationship became a symbiotic one, as humans were able to catch more prey with the help of dogs.

The major shift occurred when humans realized keeping animals around was pretty cool. It predates history so we’ll never really know, but Hare and Woods believe dogs may have inspired humans to begin domesticating other animals and perhaps even plants — hence, the agricultural revolution.

If that theory is true, then civilization as we know it today is the result of a joint effort by humans and canines. So next time you’re privileged to be standing by the LaCroix closet, arguing with a coworker about whether pronouncing it “lah-krwah” makes you a snob, take a moment to thank dogs for your blessings.

Our extensive history with dogs explains the bond we share, but what makes dogs great office companions today? We’re not hunting and gathering anymore, and unlike their hunting ancestors, office dogs don’t help us complete tasks. Although dogs aren’t pitching to our clients or optimizing websites, the way dogs work together and socialize is pretty similar to how we operate around the office.

The first remarkable similarity we have with dogs is that they have many of the same qualities as human infants, specifically the cognitive skills that allow humans to develop language and culture. Dogs can read gestures, a trait once thought to only be found in humans. And not only do they read our gestures, they have a sophisticated understanding of human communication. They can make inferences. “Show a child a red block and a green block, for example,” Hare explains. “If you then ask for ‘the chromium block, not the red block,’ most children will give you the green block, despite not knowing that ‘chromium’ can refer to a shade of green. The child infers the name of the object.” In Hare and Woods’s extensive studies, dogs were found to spontaneously infer in the same way when given new commands and objects.

But what dogs do with their social intelligence is what makes them much like us — they cooperate to solve problems.

For pack animals this seems like a given, but not all pack animals are great team players. In research studies where a group of chimps is asked to solve a problem that involves food, the chimps get too competitive and frustrated with one another to complete the task.

Dogs, on the other hand, have cooperative social intelligence. According to Hare and Woods, not only are dogs better at solving problems in groups of their own, but this skill also crosses species. Studies show when dogs are faced with a problem they can’t solve, they look up at a human for the solution. This sort of social intelligence is peculiar to dogs; even wolves, the ultimate pack animal, do not exhibit this cooperation with humans.

In short, much like we do here in the office, dogs work together to get things done. And like any good boss, dogs know how to utilize their employees (us).

Pups Are People, Too

Dogs understand our gestures and work with us to solve problems, but I don’t think that’s enough to forge the sacred bond between man and office dog. I think it’s something more.

Scientists have long speculated whether dogs understand our feelings or are just reacting to a set of observable patterns in their owners’ behavior. The answer may lie in yawning. People who catch contagious yawns tend to score higher on empathy tests, and children with autism who have difficulty empathizing also catch fewer yawns. When researchers yawned at dogs, 70 percent of dogs yawned back.

While we’ll never know whether dogs truly feel what we feel, the yawn test is a pretty strong indicator that they do. But most dog owners don’t need a yawn test to sense this emotional connection. All these stats are nice and all, but if you work in a dog-friendly office, you know the real reason that creatives love their office dogs: they get us. And through it all, they’re there for us.

It sounds cheesy, but since this is a dog blog, I might as well go tennis-balls deep. Dogs are part of the office family. When we nail the big pitch, when we lose a client, when we drop food on the floor — the office dogs are there. “The present work presents considerable evidence that pets benefit the lives of their owners ... by serving as an important source of social support,” writes researcher Allen McConnell in the Journal of Personality and Social Psychology.

In creative industries, we need that support. We take risks to win bigger, but it also means we can fail bigger too. It’s a dog-eat-dog world — but we’re in it together.