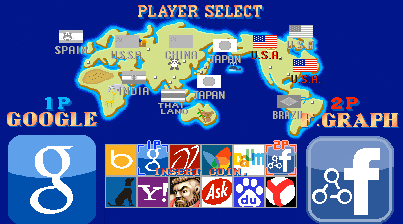 Facebook’s advantage lies in its user data and its less-than-stellar views on privacy. The core of Facebook’s Graph Search is the ability to tie demographics and psychographics to users’ interests and then tie all of this to each user’s peer network. In other words, Graph Search will incorporate everything you’ve told Facebook about yourself, plus every action you’ve taken on Facebook, and combine that with your friends’ profile data, actions, and interests to provide laser focused search results.

Graph Search will provide searchers with real suggestions or concrete answers to their questions, rather than a list of pages or traditional search results, and will specifically excel with super long tail searches, like “Restaurants in Atlanta that have been recommended by my friends.” They have the data and capabilities to provide customized results in a way that no one else currently can.

Boom. In the blink of an eye Facebook just destroyed Google’s search advantage with their new algorithm, right? Maybe…

Google’s approach—tried and true—is different. Essentially, when Google considers a user’s query, it looks at several factors, including relevance, keyword intent, search history, demographic data (if the user is logged in), psychographic intent, any geographic or local relevance factors, related content, and a whole host of other things that can be summed up in two words: sematic search.

Google is evolving though. I’m not sure how much longer I would describe their approach as semantic. It seems apparent that their goal is to move from a semantic approach to an Artificial Intelligence (AI) approach.

Google is shifting in an effort to view the web as a series of objects—to give a 360-degree view to its users with attributes and interactions. Hence, by combining their already effective semantic approach, their increasing demographic/psychographic data (albeit inferior to Facebook’s data), and an object view of the web, they want to emulate how humans view and interpret the world.

This big AI brain would see all, but deliver unique, individualized experiences. So, even if Facebook nails Graph Search, can they even compete with Google’s Big Brain / AI approach?

Why Facebook Will Lose, Even if Google Doesn't Win

Simply put, no. Despite whose search algorithm delivers the best results, Facebook will still lose. There, I said it. They will lose and lose big, and it will be because of how Facebook monetizes users and their lack of user experience in the way they serve ads.

Currently, there are no ads in the Graph Search beta, but there will be soon. And that’s fine, but the big difference between Google and Facebook is that Google refuses to let its ads have a negative impact on user experience.

Facebook claims that its only goal is to make the world more connected, but it doesn’t feel that way anymore. Maybe in the beginning that was true, when Zuckerberg was running the company out of his dorm room, but not anymore.

Recently, especially post-IPO, Facebook hasn’t shown much willingness to sacrifice profit for the sake of user experience. That’s why users get bombarded with the same ads over and over until they age out of the targeted demographic, regardless of whether they click on the ads or not.

Can you imagine Facebook implementing something like Quality Score that would purposefully drive relevancy up and ad prices down? I sure can’t.

On the other hand, Google has demonstrated many times over that they will prioritize user experience over short-term revenue. They want to sell ads, sure, but they want to sell relevant ads that won’t cost them searchers.

Google is trying to organize the web. What is the 2013 version of Facebook trying to do?

If they’re not careful, and they don’t return to prioritizing user experience over revenue, they could easily go the way of Yahoo.

Yahoo never tried to solve a problem as their primary objective. They tried to sell ads. Yahoo never cared about the user. They simply created and aggregated content to serve various demographics. This left them as a .com “has been” struggling to remain relevant without a purpose for existence.

Google has one goal when it comes to search: relevancy. They know that they’re always one click away from losing a user. This purpose, this focus, this commitment to the user is why Google will win the war, even if they don’t win every battle.

Moreover, by simply trying to monetize everything and not trying solving a problem, Facebook could easily follow Yahoo into the long list of internet relics and also-rans.

If they don’t get back on the UX train, in 10–15 years people will look back and say, “Remember Facebook? Yeah, they were big around the same time Justin Bieber was. It’s hard to believe people used to listen to him.”

My bet is that users will still use Google primarily and that its dominance will continue to grow. As Bing and Yahoo slowly degenerate, the only thing that can stop Google is Google.

And I wouldn’t bet on that happening anytime soon.