The Art of Garbage Marketing: As Perfected by the AJC Reach 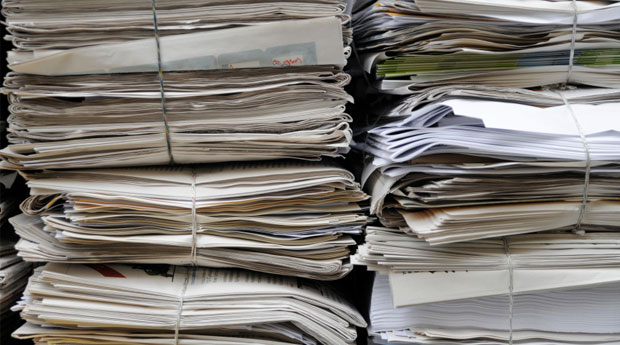 There is mediocre marketing. There is bad marketing. And there is failed marketing. But there is something worse than all of those combined: the AJC Reach.

They claim to be marketing. But they are litter. Garbage masquerading as marketing.

The AJC Reach is a color booklet of advertising, coupons, and discounts wrapped in a plastic bag and thrown on lawns and driveways in the metro Atlanta area. It’s branded by the Atlanta-Journal Constitution, which outsources its production to a company called American Circulation Innovations (ACI). Companies can buy ad units and inserts, and it’s distributed with the AJC’s Sunday newspaper and to “non-subscribers.”

ACI works with a variety of other newspapers across the country. Where ACI is involved, complaints start to arise (e.g. Springfield, Mass., Dallas, San Diego) about their litter. People have also complained about advertising circulars in Philadelphia, Providence, Rhode Island, and Tacoma, Washington. ACI’s “unique operating efficiencies” along with the practices of similar print media companies have left a trail of disgust around the United States.

To play devil’s advocate for a moment, the business case for the AJC Reach would go as follows. In Atlanta, the AJC Reach claims to deliver to 1 million metro Atlanta households – 216,000 through their Sunday newspaper, and 875,000 through “household delivery.” Their sponsorship rates to reach 1 million people range from $1,600 to $4,800 for one interior placement, to about $18,000 for one exterior placement. That’s a lot of money to be made for so many ads every week.

However, that “household delivery” to reach 1 million people is the AJC throwing their litter, their garbage, on the driveways, lawns, and streets of metro Atlanta. It is also tossed onto people’s property whether they want it or not. (People who have tried to opt out mysteriously start getting it again, and it appears only the weight of a neighborhood association can stop you from receiving it.) Even worse, if you’re traveling and the AJC Reach piles up over a few weeks, it handily demonstrates to burglars and robbers that you are not home. In fact, the AJC is helping you advertise – letting a target market of criminals know when you’re away.

People have complained about this litter for many years, especially when the AJC switched strategies a few years ago and started throwing the AJC Reach onto property (rather than delivering the circulars through mailboxes) in order to cut their costs of delivery. The AJC has repeatedly claimed First Amendment protection and acknowledged that customers can opt out. ACI also claims to offer a variety of more targeted marketing methods with clear ROI.

But none of this still addresses the impact of 875,000 "non-subscriber" AJC Reach circulars bombarding metro Atlanta every week. When searching for the keyword phrase “AJC Reach” in Google, the first 16 out of 20 results are negative – all protests and citizen complaints against these flyers as litter and trash. And in a world where interactive marketing is not only better for the environment but also smarter in its use of advertising dollars, the AJC Reach appears more obsolete and wasteful every day.

There is no excuse for the AJC Reach. Their activity is unconscionable.

The AJC and ACI can change their approach. More people now use mobile devices than personal computers. 800 million people are on Facebook. Social and mobile integrate and become more seamless everyday, especially with younger generations. Dropping trash on people’s doorsteps and lawns will no longer be acceptable in a short period of time. The AJC can decide to embrace the change now and begin to more smartly interact with and engage customers. Or they can continue to piss people off until the little bit of money they still make from AJC Reach dwindles down into nothing. 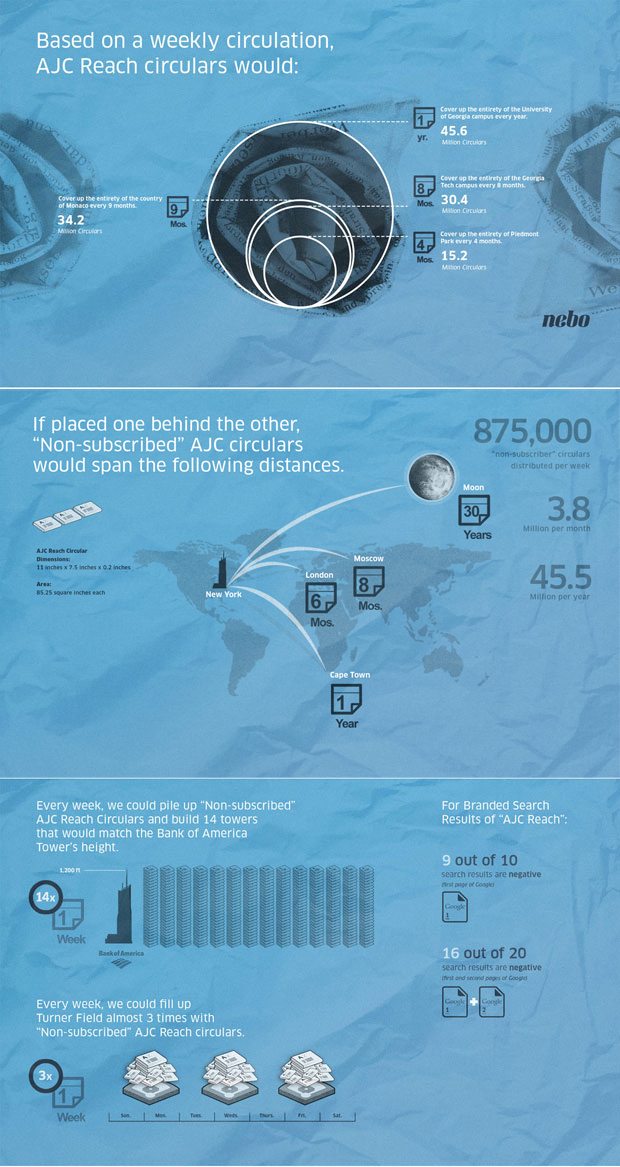 I am one of many metro area residents who have been fighting this litter nonsense for three years and I was pleased to find your site and the summary of the problem that you put forward.

I have opined for years that probably the only thing keeping the AJC afloat is their advertising operation. The daily news readership keeps dropping and the staff cutbacks seem to come at regular intervals.

Without the income from this mass littering with advertisement circulars they would have already been out of business. Unfortunately they seem immune to complaints like ours and I don't quite understand why they don't just pay the slight extra cost and return to mailing our the advertising as they did for years.

ACI seems like a very sleazy operation and email addresses/names of their top people are found on my blog site http://www.atlantajournal-constitution.blogspot.com/
and also see: http://www.stopajcreach.org/ for additional consumer input.

I am again taking up a BBB complaint but they have been a dues paying member since 1952 and I understand that such long relationships pretty much give them protective status for any misdeeds, so even getting them dropped from their A+ rating to a B seems unlikely.

Maybe people should start charging them with vandalism, trespassing and littering.

I have been drawn to two of your blog posts via Facebook advertisements. This one about the AJC Reach and the other about the failed TSplost. Both explanations were spot on and you articulated the short comings perfectly. Well done. I am beginning to think you either know what you are talking about or you can read my mind.

This is by far my favorite Nebo blog post.