I Ain’t Scared (At Least Not Anymore) 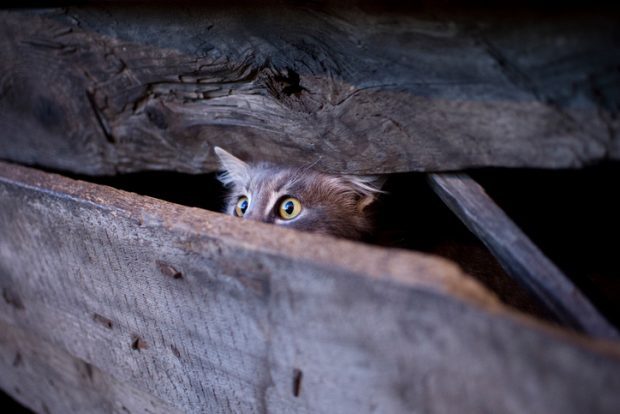 If I had to describe me as a kid, it wouldn’t exactly be flattering. Men/boys who were as scared of things as I was would typically have been described with the very unfriendly term for a scaredy cat.

I was scared of pop-flies (and had the hit to the face to show for it.) I was scared of heights. White-water rapids, as well as six-inch drops in calm rivers. Roller coasters. Talking in class (and its next stage of terror, called public speaking.) Takeoffs and landings, to say nothing of turbulence.

And as I got older, the challenges and their related concerns simply grew.

I was 25, and I had gone from having a wife, house, dog and a good job to being single, with no dog or job, and living with Mom again.

In the midst of this all-around spectacular quarter-life crisis, I had a revelation. My life sucked. I mean really, utterly painfully sucked. And it sucked so bad that in comparison to the pain I was feeling every day, the things that I used to be scared of didn’t really seem so scary.

Soon thereafter, I decided to take off a semester from grad school and go backpacking through Australia for three months. (Hey, when you don’t have a job and live with your mom, it’s amazing how easy it is to get up and leave!) In less than four weeks, I was on a plane there.

A month into my trek, I found myself in Cairns which is the closest city to the Great Barrier Reef. Scared little boy Todd was sad that he wasn’t a scuba diver. But 26-year-old me said, screw it. I signed up for a week-long class, and after seven days and one night-dive with sharks later, I was a scuba diver. Holy crap.

That was the kicking-off point. From there, I ended up trying a whole lot of terrifying stuff. Bungee jumping. Skydiving. I might have even gotten my belly button pierced for one weird summer around then. (I REGRET NOTHING!!!) In addition to normal roller coasters, I did all kinds of thrill rides at theme parks, carnivals and other roadside attractions.

Bottom line: I realized I was capable of more than I’d ever given the younger me credit for.

Now if the story ended here, it would be a very shallow one. And I would probably have ended up splattered on the pavement somewhere and covered with tribal tatts.

But I ended up applying this “I’m not scared” mindset to most every challenge I’ve run into over the past 17 years.

For one, I got over my fear of public speaking. (More about that in a later blog post.)

I also faced one of my biggest fears from childhood: sports. I was an artist, and terrible at sports. With that, I found most every coach I ever had to be — no offense — a stupid moron. But when my kids started playing sports, I found I wanted to get involved. And even though I had no idea what I was doing, I volunteered. This is my sixth season as a head coach and it has been amazing. I’ve applied the philosophy of doing the opposite of what was done to me, and to all of our benefits, soccer is exciting, rewarding and fun — for the kids, for their parents and for me.

As other challenges have come up, instead of backing down, I’ve tried to move forward. Realize I have no idea what I’m doing — or how it is going to work out — and keep going regardless.

You could say this philosophy applied to my coming to work here at Nebo. I’ve never done business development before. Sure, I’ve helped out in tons of pitches in my former role as a creative director, but I’d never actually done “biz dev.” And — so far at least — it’s gone very well. I’m learning something new every day. And as each challenge comes, I try my best to rise to it.

I’ll sum up, by saying what I said to my kids on this very topic: bravery isn’t about not being scared. Bravery is about being scared, but doing it anyway.