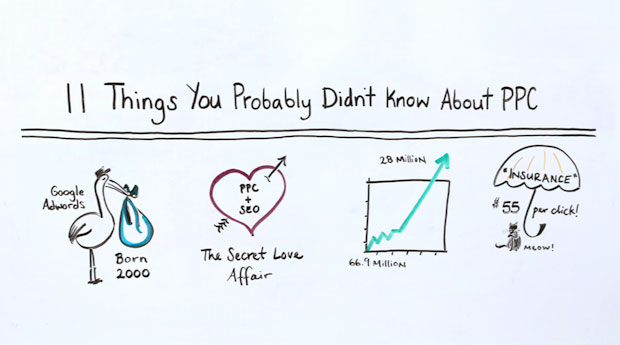 Twenty years ago it would have sounded crazy.  Imagine a traditional ad agency telling a client, “We only want you to pay for this ad when it actually brings a customer into your store.”  Yet, with the advent of Internet advertising and the tracking abilities that have come with it, pricing models have evolved to allow advertisers to be more efficient.  We can now pay per impression, click, or even action.  So how did this get started? What could be next?  Below are some interesting facts you may not have known about PPC advertising.

1. The birth of Google AdWords. When AdWords began in 2000, it started as nothing but a CPM Platform. Google created and managed advertisers’ campaigns for them and charged advertisers a monthly fee. Two years later, the Adwords Pay Per Click model was introduced to the world, completely changing the online advertising model. (Goto.com, now known as Overture, was credited with concepting the PPC model in 1998.)

2. Search engines followed Google’s lead. The last of the “big three" engines to develop its own PPC system was Microsoft. It served Overture (and then Yahoo!) ads on msn.com until 2006.  In 2010, Microsoft formed the Microsoft Search Alliance and took over Yahoo! Sponsored Search.

3. PPC and organic search work in tandem for search traffic. Google disputes the rumor that PPC cannibalizes organic search indicating, that 89% of the traffic generated by PPC ads is, in fact, not replaced by organic clicks when the ads are paused.

5. The click fraud lawsuit. In 2006, Google agreed to a $90 million click fraud settlement fund in a class-action lawsuit file. Advertisers could receive AdWords credits if they suspected they were the product of click fraud.

6. The creation of "Google Clique." In 2004, someone tried to extort Google for 100k by creating software that exploited a loophole in Google’s click fraud detection processes.  He was obviously arrested but all charges were dropped – most likely because Google didn’t want to reveal any proprietary information.

7. The keyword “insurance” will have you paying the most. On average, up to $55 per click!  “Loans” and “mortgage” round out the top three categories at around $45 / click.

8. Google forfeited $500 million in 2011 for allowing Canadian pharmacies to unlawfully advertise prescription drugs. Sources claim Larry Paige knew this was happening but didn’t take steps to prevent it because of the revenue.

9. Google’s year over year CPCs actually dropped by 5% in Q1 of 2012. While Yahoo-Bing’s CPCs increased by 18%. Still, Google received increased clicks overall and was able to hold onto its #1 market share.

10. 20% of searches on Google are related to location and 25% of PPC clicks will come from mobile devices by the end of the year.  Yet another reason to optimize your campaigns for local/mobile.

Interesting article!! Would really appreciate if you could provide source info for the 11 points mentioned. Thanks..