Why Fútbol Is More Popular than Football 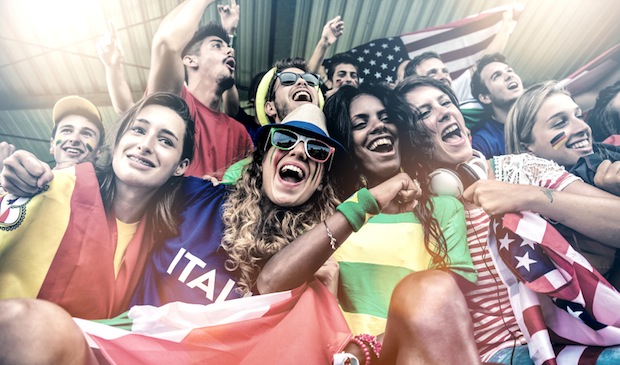 In the days and weeks (and, for some of us, years) leading up to the 2014 FIFA World Cup, the entire world shifted its attention to Brazil in anticipation of the opening match.

The World Cup is the most globally televised sports event in the world, with millions tuning in to catch each game. The final match even draws more global viewers than the Super Bowl – easily considered by Americans to be the biggest television event of the year.

Fútbol’s popularity around the world can’t be denied, as it dwarfs iconic American sports like baseball and football.

The only question is why.

For non-fans, it’s easy to craft an argument against soccer as a compelling spectacle. It’s essentially 90 minutes of 11 men chasing a ball around that often ends in a scoreless tie. But if you look closely, like the rest of the world does, you’ll see that soccer values story more than any other sport in the world. And the way story has been integrated into every facet of the game is a key ingredient to the sport’s success.

It all begins with the actual games.

Soccer’s core structure is largely responsible for its atypically high level of fan engagement. A match is 90 minutes of pure, uninterrupted sports and story, only pausing for a 15 minute break in the middle -- an intermission, if you will. And as the game progresses, the drama builds. Each goal is one point, and it’s much harder to earn a point in soccer than in most other sports. Fans become more involved as the suspense builds. Every move counts either for you or against you, and the game can change in any moment.

The depth of engagement viewers get in soccer surpasses any and every other sport. In the US, football and basketball are not continuous stories. It’s hard to maintain focus and keep the emotional energy high after timeouts and seemingly unlimited commercial breaks. NFL games, which are broadcast over about three hours, can ultimately be distilled into less than 15 minutes of live action when you just look at plays from scrimmage.

Soccer is non-stop action. That’s what sets it apart.

And this purity of story bleeds into the commercial aspects of the game, as well. With fans so engaged in the action, and with limited airtime for traditional spots, advertisers have had to find clever ways of making their mark on the game. They build excitement with their commercials leading up to the game. And they work hard to tap into the fervor and passion of the fans. Imagine viewing only the best of the best Super Bowl ads – that’s what it’s like to watch the World Cup.

This Hyundai commercial is a great example of a brand pushing itself creatively, and it immediately became a major success after running the first time.

But there’s more to soccer’s success than its non-stop nature. There’s more to it than the high level of effort it requires from brands and marketers.

At its essence, soccer’s story is much deeper and more personal than outsiders give it credit for.

Soccer in the World Cup is an expression of the hopes and dreams of each participating country. For some nations, anything besides victory is considered failure. For other nations, the World Cup is instead a celebration of the years of hard work it took to qualify for the tournament. For others still, it’s an escape from the harsh realities of everyday life.

In any case, the 23 players selected to represent their countries draw the attention and support of millions. Take a look at how the Chilean team’s ad reflects the country’s national spirit:

The sport, and the team, and the fans, and the country can’t be separated. If they win, we win. If they lose, we lose.

This fervor, in many ways, helps the story go viral.

Three friends of mine decided to journey all the way from Costa Rica to Brazil this year, in order to be able to see their team play in the World Cup. They worked to get sponsors to help make the trip a reality, and have been documenting every step of the way on their YouTube channel.

In the video below you can see the emotion they feel when Costa Rica wins their first game against Uruguay, defeating all odds in the group of death. You don’t need to be fluent in Spanish to feel the emotion of the occasion, particularly when we watch one of the young men shed tears of joy on camera after his team wins (around minute 4:30).

This is emotion that you don’t see in other sports. But in soccer?

It’s all part of the game.

Excitement for this year’s tournament has been so robust that, even here, where soccer has traditionally resided only on obscure specialty cable channels and tucked away taverns, the numbers are through the roof. The US Men's National Team's recent match against Portugal was the most viewed soccer game in American history. And interest is still growing.

It’s not surprising, when you really think about it. In fact, it was inevitable. Because if there’s one thing Americans love, it’s a great story. And soccer – the way the game is engineered, the purity of advertising, the cultural significance – is the ultimate vehicle for story.

As Americans, we’re just starting to discover what the rest of the world has known for a long time.

The only surprise is that it took as long as it did.