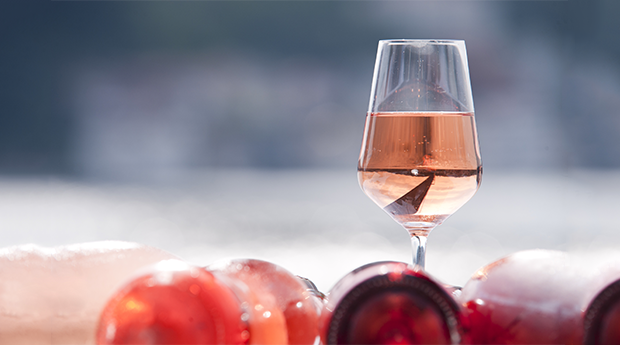 This isn’t a red versus white debate (we’d be here all day), but something more in the middle. Precisely in the middle, actually.

More people are drinking pink these days, and U.S. sales have reflected that with imported rosé increasing in sales 40 percent more in 2014 than table wine.

Before you roll your eyes and scoff at the pink elixir, you should know this isn’t your grandmother’s rosé. What was once exclusively the wine of the mahjong set has become the go-to drink for everyone from Hamptons-going socialites to Bud Light-drinking basic bitches to Nebo copywriters with a thing for pop punk.

But rosé didn’t come out of nowhere. It has a long history with roots dating back to ancient Greece.

This isn’t the birth of rosé. It’s the comeback.

According to Greek mythology, rosé came about when red wine was mixed with water at political meetings to dilute its strength and hopefully have fewer fights between council members. It’s a nice story, but rosé is not watered down red wine. You get rosé when the grapes aren’t left to macerate (a process during which the dark grape skins are left to soak in the juice) as long as they are with red, resulting in lighter coloring and smoother taste.

The pink variation was the drink of choice for Greeks in the fifth century B.C., earning rosé the title of history’s first wine. It was the most popular option until around 100 B.C. when the Romans stomped on the parade and said, “No way rosé. Red is the way to go.” Flash forward to the Middle Ages, when wine historian Hugh Johnson says a pale pink “wine made in one night” was considered the most desirable, and countries all over Europe started making batches of rosé as quickly as they could.

Rosé remained top dog in Europe until the 18th century when darker wines took over yet again. In the mid 1800s, it made its way west, and America started producing its own brand of pink wine. It wasn’t until the 1970s when a mistake made in a California winery would tarnish the reputation of rosé for nearly four decades.

Mega-vineyard Sutter Home was making a batch of red zinfandel in 1972 when they experienced a stuck fermentation, which occurs when the sugar isn’t properly converted to alcohol and CO2. Rather than toss out the sweet, pink concoction they were left with, Sutter Home head winemaker Bob Trinchero decided to bottle it, and the white zinfandel we all ascribe to our favorite grandmothers was born. Behold a new category of wine, the “blush.” It was similar in color to rosé, but not in taste.

America fell in love with blush wines like the white zinfandel. Pink wines became a staple in the U.S. wine market, and Sutter Home’s white zin sales soared from 25,000 cases in 1980 to more than 4.5 million in 1987. Pretty good, right?

Although blush wines were popular, they were not respected. That sickly sweet white zin adored by housewives and found on every major grocery store shelf wasn’t popular among wine critics, who saw it as trashy. The general population soon took note.

White zin disappeared from restaurant menus. It was as condemned as New Coke. The Keystone of the wine world. It died a quick death, and anyone respectable still drinking the stuff did so in private, away from the judging eyes of their peers.

Which was bad news for rosé. Anything pink was equated with that sweet white zin, and seemingly insurmountable damage was done to the rosé name. The wine would spend the next 30-plus years setting the record straight.

Now it’s 2015, and rosé is back bigger and better than ever. It’s the wine that launched an Internet meme, fifty hashtags, and a set of merchandise to go with it. Sales have skyrocketed.

What changed everyone’s minds? For starters, wineries began making versions of the drink that weren’t reminiscent of liquid cupcakes. Gone was the sweet rosé of the past, replaced by a dry, delicate version that doesn’t offend the taste buds.

It’s also affordable. Most bottles cost $30 or less, regardless of where you buy or where they originate. And in 2015, cheap has stopped being passé. Maybe it was the rise of vintage and thrifted fashion or the mainstreaming of hipsters and their PBR, but for whatever reason (the Great Recession), cheap has become socially acceptable.

Arguably most important in the quest to rebuild its image, the drink has firmly been cemented as the summer wine of choice. The pink wine has a limited shelf life owing to the short maceration time, which only adds to its allure as a symbol of summer. Much like the champagne reserved for weddings and New Year’s Eve, rosé has come to signify a different celebration of longer days and warmer weather.

If you need further proof of rosé’s resurgence, last summer the Hamptons experienced a devastating shortage, leaving the vacationing masses to resort to blasé white wines that aren’t nearly as Instagrammable. This year, “brosé” has been deemed a thing (soliciting a collective eye roll from the rest of the population), and Josh “The Fat Jew” Ostrovsky has launched his own line of White Girl Rosé, both adding to the stereotype and trying to break it (his version is dry and floral, rather than sweet as the name suggests).

As with all things pop culture, the popularity of rosé might run its course. But if history has taught us anything, it’s that rosé stands the test of time.

The pink drink has staying power, proving that if you make something well, you’re persistent, and you get in front of the right markets, you can make it work. (This theory is tested when another entity in your market makes a mistake and ruins your product’s image for decades, but if you continue to give the people what they want, your superior product will eventually win out, and you will save the day!)

So go ahead, celebrate the last day of summer with a glass of rosé tonight. Then grab a six pack of pumpkin beer and put on your favorite football jersey, because fall is officially here.