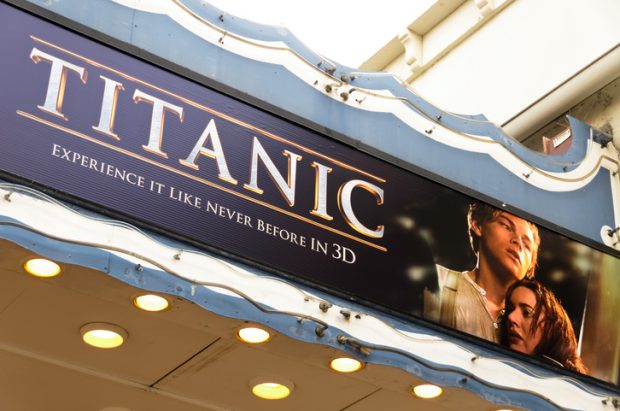 In 1997, the Spice Girls invaded America. My brother came down with a disastrous case of frosted tips. And Radiohead’s “Creep” played on MTV’s “Dawn Patrol” while I ate my Honey Nut Cheerios.

Life was all about rocking board shorts, Drew Barrymore barrettes and scouring Seventeen for full-page spreads of Jared Leto (aka Jordan Catalano). When we weren’t fighting over the bathroom mirror, kids like us were accessing the World Wide Web via Netscape and crunchy dial-up internet tones.

But in this pre-TRL, pre-Britney boom time, one cultural touchstone broke through all the noise. And that iceberg, ladies and gentleman, was “Titanic” — the James Cameron mega blockbuster that redefined film for the dawning 21st century.

When Cameron pitched “Romeo and Juliet on the Titanic,” studio execs were skeptical, but they backed his three-hour epic anyway. After all, young Leo was fresh off his star-making turn as an armor-clad heartthrob in Baz Luhrmann’s angsty ‘90s reimagining of the Shakespeare classic.

With the help of 17 million gallons of water and a ship 9/10s the size of the ill-fated ocean liner, the “Titanic” team crafted period details that could make any tween heart soar. There was the infamous “King of the World” bow and the Grand Staircase where a breathless Jack admires Rose in a lace gown that defined prom goals for 1998.

James Cameron had made his career reimagining archetypal storylines with sweeping technology. And the story of Rose, a cloistered rich girl with repressive parents, and Jack, a steerage-class optimist without a penny to his name — is no different. Star-crossed lovers meeting on the ill-fated maiden voyage of the world’s most stunning ship? Cameron had a sure-fire hit on his hands.

The film itself is full of unforgettable moments. There’s the cringe-inducing “paint me like one of your French girls,” those schlocky “I’m flying” bow scenes and that steamy, ecstatic handprint slapped on the window of a 1912 Coup de Ville. In today’s internet-everything world, a movie like “Titanic” would be the subject of viral movie marketing and countless Tumblr accounts chock full of “King of the World” gifs and memes starring Kanye West.

That Christmas I saw "Titanic" three times. I was swept away by the romance, the teen angst, the grandeur and the tragedy of it all. I knew how it would end, but my heart raced every time the water rushed into those steerage-class hallways. From the second Jack and Rose end up in those dark waters, to the moment Rose sends her diamond and sapphire heart spinning into the ocean, I could barely swallow from the lump in my throat.

When I wasn’t at the theater, I read books about the doomed ship, collected commemorative “Titanic” editions of People magazine, did homework to the film’s soundtrack and turned up the radio whenever Star 94 played Celine Dion’s cheese classic, “My Heart Will Go On.” Even though the film was released before the era of omni-channel movie marketing, somehow “Titanic” trickled into every part of our pre-Y2K lives.

That year “Titanic” fever struck the nation. Edwardian empire-waist gowns graced runways and red carpets, and J. Peterman released a Titanic-themed catalog where ravenous fans could shell out major cash for steamer trunks, parasols and lifeboats. At department stores, gas stations and restaurants across the country, Celine let everyone know that her heart would go on, and on, and on.

Earning $2.19 billion at the box office, “Titanic” is still the second highest-grossing film of all time — surpassed only by Cameron’s epic for a new age, “Avatar.” With a budget of $200 million, at the time the film was the most expensive ever made. And that year “Titanic” earned critical and commercial acclaim. It scored 14 Academy Award nominations and won a record-tying 11 trophies, including Best Picture and Best Director for James Cameron.

Twenty years later, “Titanic” still looks stunningly beautiful, thanks to the mostly practical effects that keep the story afloat. And though experts now believe the Titanic sunk in an entirely different way, and that Jack could have totally fit on that door too, “Titanic” is a cultural touchstone for an entirely new generation.

Listening to the film’s soundtrack today fills me with none of those earnest, angsty emotions that helped me wear out my Discman back in the day. I suspect most of my warm feelings about “Titanic” come from seeing the movie at a very impressionable age. And Celine’s theme song, widely panned as schlock even in 1997, is almost unlistenable today.

Despite some of its cringier moments, “Titanic” still shines thanks to the grandeur of Cameron’s singular vision, its technical proficiency and the very human performances of Leonardo DiCaprio and Kate Winslet, who were both talented enough to escape the shadow of “Titanic” and launch successful acting careers.

Titanic for the 21st Century

In honor of the film’s 20th anniversary, this year “Titanic” was remastered in ultra high-definition Dolby Vision for a limited holiday run. No doubt "Titanic"’s 2017 producers could have forged dozens of cross-promotional marketing schemes like the ones that have launched “Star Wars,” “Frozen” and countless other modern-day blockbusters into the stratosphere. Perhaps they could have released limited-edition art prints, a Titanic-inspired menswear collection at Banana Republic or White Star Line china at Pottery Barn.

And if “Titanic” were being released for the first time in 2017, the marketing team would have been all hands on deck. A female-centric marketing campaign similar to the one that launched the “Twilight” series could have included an app for uploading your face alongside Leo’s in that famous bow scene. And on social media, loyal fans would be invited to demonstrate their fandom for a chance to win a trip to the “ship of dreams” set.

Perhaps there would be “I’ll Never Let Go, Leo” T-shirts at Forever21, a roving “Titanic” promo bus where fans could hop aboard for a taste of Edwardian luxury, and even a limited-edition Heart of the Ocean palette from MAC, featuring oceanic blues and colors like “Sunset Rose” and “Unsinkable Miss Molly.”

Selling the Ship of Dreams

Unlike other blockbusters of its time, “Titanic” hit theaters with virtually no marketing support. Apart from the soundtrack, which became the best-selling soundtrack of all time, there was nothing for lovestruck tweens to cling to.

At the time movie marketers struggled to come up with ways to market a three-hour tragedy with virtually unknown stars and few product-placement opportunities. But by February 1998, “Titanic” producers and would-be entrepreneurs had sanctioned additional albums, shipwreck documentaries, countless TV specials, annotated scripts and even a “Titanic” music special.

Now that attention spans are spread across streaming platforms like Amazon Prime, Hulu and Netflix, it’s hard to image a movie capturing a year in culture the way “Titanic” did. In 1997, monoculture was just beginning to lose its grip on America.

Princess Diana had died. Cable was overtaking the big three networks. And the internet was starting to change the way we consume news, entertainment and everything in between. James Cameron’s epic topped the box office for 15 weeks and enjoyed a 10-month run in the theaters. But in today’s claustrophobically crowded media market, could “Titanic” possibly break through the way it did 20 years ago?

A few years ago I went to a Titanic exhibit and caught a glimpse of the real passengers aboard the ill-fated ocean liner. There were waterlogged perfume bottles, rusty serving spoons and sparkling jewelry that once graced the necks of Titanic’s most exclusive passengers. Staring at a section of the ship’s hull, excavated from the watery depths where 1,500 people perished, I was reminded how real the story really was.

Over a century later, why is the Titanic still so fascinating? Is it the ironic marketing of an “unsinkable” ship struck down by an iceberg on its maiden voyage? The stark divisions of race and class and mortality?

Perhaps Titanic’s sinking stays with us because it serves as a harbinger of the tragedies that followed — two world wars that killed nearly 100 million people, a backbreaking depression and the dawn of atomic warfare. In a similar way, “Titanic” the movie arrived at the tail end of the millennium, before 9/11, two wars in the middle east and a great recession.

Yes, perhaps it’s the innocence that we miss — the promise of what was and what could have been. Perhaps that’s what I miss most about myself too. Either way, this Christmas I’ll probably cuddle up on my couch with Snowcaps and a soda, and commune with my tween heart. Even though I know how it all ends, maybe this time — just this time — there will be a happy ending for Jack and Rose.

Titanic in 3D would be such a great experience.

Titanic is one of the great film of all the time. The film was a perfection.

This is the great movie I have seen so far in my life.

Today 2019 but, still I love to watch this greatest movie ever.

Every movie has a unique story, but Titanic is a real story. Remembering those scenes while reading this post is awesome. Thank you!!!

OMG. Titanic is the ultimate and greatest movie ever still now.

Titanic is my all time favorite movie. I love to watch it again and again.