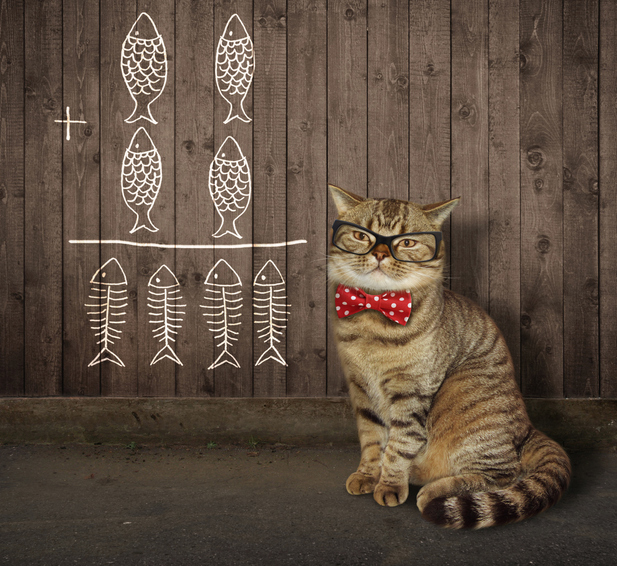 First. Math is the discipline of staying with a problem long enough to solve it.

Writing doesn’t come naturally to me, I’m a self-proclaimed numbers nerd. But I have something I want to say, so I’m going to figure out how to do this. One rewrite at a time. All the wrong ways first. Each daunting word after the next, as I attempt to untangle my thoughts and restring them nicely so you can follow along.

I need a Red Bull.

Second. Math teaches you how to think structurally.

For this blog, you need a beginning, a middle and an end. You need a hook—math can teach me how to write? I don’t believe you. Tell me more.

The middle should serve up some evidence to back up my claim. Math can help you in all areas of life? Even writing a blog? Show you, you say? Fine, here’s your middle.

A Cal Berkeley professor and researcher named Alan Schoenfeld observed students working on a math problem. Most of them gave up quickly and asked for the solution.

But a woman named Renee didn’t give up. (Just like I’m not giving up on you, reader.) Renee worked at the problem for 22 minutes. She poked and prodded and tried different variations until she figured out the correct answer on her own.

Author Malcolm Gladwell, who wrote about Shoenfeld’s research in his book, “Outliers,” hypothesizes that the legacy of wet-rice farming factors into why Asian universities excel in math, compared to literally every other country on the planet.

In case you haven’t grown rice in awhile, I’ll fill you in. Growing rice is a laborious job. It requires constant attention. And farm equipment that’s typically used in the West to make life easier doesn’t work in the steep and narrow rice fields of Asia. There are no shortcuts.

Third. A higher IQ or quality education isn’t a predictor of whether you’ll be a math wiz.

In another study, researchers found that one of the most reliable predictors of whether a student will be good at math isn’t their IQ or the quality of their education. It’s in their willingness to complete tasks thoughtfully.

Fourth. To be good at math, you don’t need Albert Einstein’s genes. You need his tenacity.

Nobody had E=MC2 scribbled on a cheat sheet. Imagine what it took for him to keep chipping away at the unknown without the ability to turn to a teacher, a book or a helpful colleague and say, “I give up, show me the answer now."

According to Ryuta Kawashima of Tohuku University, math does more to grow your brain than turning up the music, listening to text read aloud and playing video games. Swapping Mario Kart for algebra sounds dry, I know, but stay with me.

Even the most basic addition and subtraction strengthens your brain—left and right hemispheres. It’s similar to how lifting weights builds muscle.

Imagine what it takes for UX designers to develop patterns and deliver a cohesive and easy-to-navigate user journey. Two roads diverged in the woods, and the UX specialist takes the one that literally nobody has traveled by.

For art directors to dream up new ideas without reaching for a design annual when they hit a block. Stop. Put that annual down. Walk away slowly. Stay with the problem instead.

And imagine what it’s like for copywriters to develop messaging for websites that are structured modularly, building the words on a page like legos.

But somewhere between the days of Sir Issaac Newton and your high school math class, it became cool to be bad at a subject anyone can master. And that could teach us all about the value of problem solving, structural thinking and perseverance.

As for this blog, I hope you like my fifth rewrite.

I am not positive the place you're getting your info, but good topic. I needs to spend a while finding out more or working out more. Thanks for excellent information I was looking for this information for my mission.

I'm a mess so Beck. My story is that when I was in second grade and really excited about counting money my teacher came over to me told me to put my money away look me straight in the eye and said you will never ever learn to count money. I believed her it's been a real handicap ever since

So you're thinking that you cannot do science, Well, what if I told you that while not even link degree pure math background I may teach you some calculus right here and now? You do not believe ME. i assumed thus. This cognitive content proves but programmed you have been from too soon to reject exact teachings. Whoever arranged this lack of enthusiasm on you in fact did range on you. Well, let's get rid of that unhelpful training and feed you some very up stuff. During this short article, I’m reaching to influence you that you simply will do In fact, by the top of your reading this; you may savvy to perform a basic operation that forms one amongst the key branches of this most vital exact discipline. This basic operation is silent as and essentially forms the branch called after we perform we have a tendency to square measure finding derivatives, and this can be the method we are going to learn additional about during this article. Taking apart could be a method that permits U.S.A. to try to things like realizes the very best purpose of move a projectile, or to work the utmost profit given a particular rule for the returns of a specific business or enterprise. as well permits U.S.A. to approximate, while not a calculator, the square, cube, or perhaps fourth roots of numbers (see my Why Study series of articles). How's that for a crucial method! And to suppose i am reaching to show you ways to try to a number of this right here, right now, despite your earlier coaching or learning. It simply does not get better than this. now carrying a bit into play, i will be able to show you ways to perform the operation.thank you..