Fight Without Fighting - A T'ai Chi Ch'uan Approach to Communication 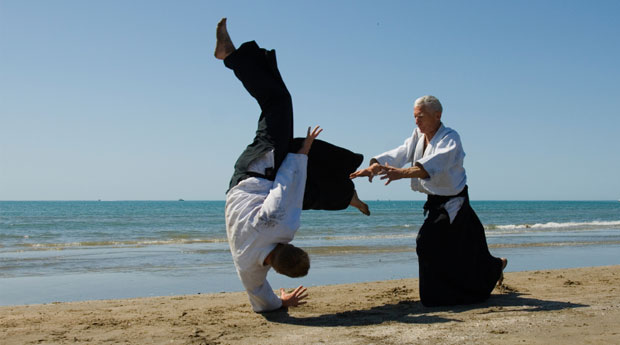 T'ai chi ch'uan is an unusual martial art in that it does not meet force with force. Instead, its goal is harmony – yin/yang. I took T'ai chi ch'uan many years ago, and I recall one particular lesson where my instructor showed our class the essential principles of conflict. He pointed out two common flaws in how people deal with conflict.

This is how most fighting in the world occurs, physically and verbally. Someone attacks you, you attack back, all hell breaks loose. While the aggressor might feel good in the moment, it never turns out well in the end.

Whether taking a punch, accepting verbal abuse, or allowing your self-esteem to be trampled, we all know people who respond to the world’s arrows and slings by accepting it as their fate. That is as unhealthy as fighting back, since you are allowing negativity and violence to have its way with you without taking a stand.

There is a third way. Disarm conflict. Dispel its energy. Return to a state of peace.

While this post could go on for thousands of words if I discussed the nuances of T'ai chi ch'uan martial arts techniques, I’ll instead jump in to some principles that stem from T'ai chi ch'uan’s philosophy.

It may seem more gratifying in the short-term to yell, threaten, and lash out. It may seem to give you power. But anger and negativity throws you off balance. Instead, always be positive, helpful, supportive, peaceful, and loving. Even if you’re being attacked. The goal of T'ai chi ch'uan is to be in a state of peace. Another person’s anger or bad manners should not rattle your peace.

Come Prepared to Every Encounter

An often underrated cause of conflict is lack of preparedness. Even if you’re at peace, if you don’t know your fundamentals and arrive to an encounter unprepared, you are off balance and open to attack. Whether it’s a meeting, presentation, or business conversation, make sure you understand any background, agenda, or materials. Anticipate every question that might be asked and every path a conversation could go. This mental preparedness lessens conflict and shows respect for others.

Attack a problem, not a person. Treat a “battle” intellectually, and have true respect and love for the opposition. A whiteboard is often a great tool for encouraging this kind of objective debate. Writing down issues and ideas on a whiteboard helps objectify a problem. People attack the ideas on the whiteboard, not you. True intellectual engagement – the ability to do battle without humiliating or attacking another person – requires much discipline and shows high respect for your colleagues. It’s fighting with honor.

It is difficult to empathize with another person’s point of view, but this path leads to greater harmony. Even if you’re listening, it’s easy to just wait for a person to finish speaking, and then talk as if you were simply on hold. Instead, as you listen, understand the other person’s motivations, concerns and feelings. Then help them understand yours. Present the facts, assumptions and logic behind your stance. Argument usually involves emotion, which leads to lack of clarity. Instead, always work to simplify and clarify the heart of your communication. That process tends to reduce conflict.

Don’t Take Anything Personally or Seriously

T'ai chi ch'uan masters seem to laugh a lot. Life is life. It’s kind of amusing and funny. It’s not death or cancer. Laugh more. Even your most horrendous business problems and complex personal issues are nothing in the face of the history of the world and the universe. Lighten the hell up.

Building relationships goes way beyond business networking and extends philosophically and spiritually toward deflating conflict over the course of your entire life. Selflessly reach out to people along your life’s journey – family, friends, acquaintances, colleagues, networking contacts, strangers, people in your community, etc. A few years ago, President Bill Clinton said in a Daily Show interview that the root of a lot of modern bitter partisanship in Congress stems from a shift in Congressional culture. Members of Congress don’t spend time with each other like they did in the 1950s and 1960s. If you don’t know people well as human beings, you are more likely to attack them. If you interact and know many people in your life, you are less likely to attack others – or be attacked.

It’s amazing how so few people use this simple conflict deflator. Part of it is information collection, but I also do it to establish rapport and show respect. People like to be asked questions and open up. By not asking questions, you shut others down and build up resentment – which later leads to conflict. It’s also a way (like T'ai chi ch'uan teaches) to draw out any negativity, tension, and hostility up front.

If the Worst Happens…

Despite all proactive attempts at reducing conflict, sometimes you will be attacked – full on, unexpected. In those moments, I always recall T'ai chi ch'uan’s handling of attacks and apply the following tactics that tend to disarm most conflict thrown at me.

Let Your Opponent Expend All of Their Energy

It takes a great deal of energy to attack and fight. In martial arts, it often helps to let your opponent expend that energy and tire themselves out. Aggressiveness and anger place your opponent at a disadvantage. Just let them yell and rant, and give them the space to expend that energy until they stop. Don’t yell or rant back. If you do, you add fuel to their fire and place yourself at the same disadvantage.

To help your opponent expend their energy, agree, agree, and agree some more. You need a thick skin, but take all of the criticism. Even ask for more. This might go against any instinct in your body and mind. (“But they’re WRONG! I can’t agree with that ***hole!”) It doesn’t matter. There is always a grain of truth in any criticism you receive, so just listen and agree with it.

The key here is that a person cannot fight long with someone who agrees with them. Eventually, they’ll calm down and feel like they’ve had their say. At this point, you have a rich store of information, you know where their mind is at, and (if you’re disciplined and prepared) you can win without fighting at all. Simply thank them for telling you everything, apologize where you went wrong, explain where you agree, and then bring up any points where you disagree. Unless you are in an unusual situation, it’s hard not to make progress when your opponent has put themselves so off balance.

If they decide to interrupt or go on another tirade, their behavior only shows at this point that they are too unprofessional or grossly incompetent to communicate in a peaceful fashion. However, in most cases the person will listen to you and consider your points in a way you probably did not think possible going into the conversation. I have had miraculous conversations occur with people labeled “aggressive” or “difficult” as a result of this technique. Often, “difficult” people warm up if you listen and empathize with them.

Even in the worst life and business scenarios, nobody can really attack you if you have the proper mindset. If you master the fundamentals of communication, listen, and redirect any negative energy, you leave no room for conflict to happen. You starve the conflict of oxygen and deflate your opponent. In a world where stress leads to so much bad health and unhappiness, the principles of T'ai chi ch'uan are worth examining in deciding how you approach conflict and communication.

In the photo the 2 men are doing Aikido. We can see a perfect ukemi (falling) of one of them ;-)

Good feedback Tim. I think my comment about preparedness came off as too rigid. Simply, it's the equivalent of knowing your fundamentals, knowing your moves, and practicing. The more you know how common or similar situations tend to go, the more you're able to anticipate possible moves (like chess or Go). The less you know or prepare, the more you'll be surprised. This preparedness isn't like rehearsing lines in a play. It just means you can anticipate the fluidity of situations through knowledge and experience.

This is an excellent piece. This is what is hard to convey about the true martial arts - they have applications in all of life's battles. It is what separates them from, say, a fighting style.

What we are dealing with here are universal principals. The martial application is often an effective way to look at it because it is one of the few where the CANVASS PUNCHES BACK, but fundamentally, these principals apply to all things.

I do however, disagree with one part of your post - the note on preparedness. While it IS true that preparedness is paramount, it is not so much about anticipating every move and reading every resource. This is a road to distraction and frustration -- did I read everything? Do I know exactly what they're going to say. What If I miss something? Should I make a list? A person can fold in on themselves and get frustrated. To put it back in a martial context, this is akin to always expecting to be in a fight. Should I use this chair? What are my escapes? What would I do if the guy stands there. or there? or there? what if there are three guys? It's an endless battle.

Remember, we are talking about universal principals of motion here, not tactics. When we talk about preparedness, it is -- as you say earlier -- about MENTAL preparedness. And it is both simple and difficult. Instead of anticipating every move, which is impossible, you need only ensure you are in a proper mental state to A: recognize things as they are happening, and B: react to them in a calm manner. So in a martial context, instead of worrying about what you'll do when the guy stands this way or that, you'll be RECEPTIVE and able to accept energy no matter where it comes from. Through training, you'll know what to do with energy once you get it... but if you never see it in the first place... BAM - your KO'd. In business and at the bar.