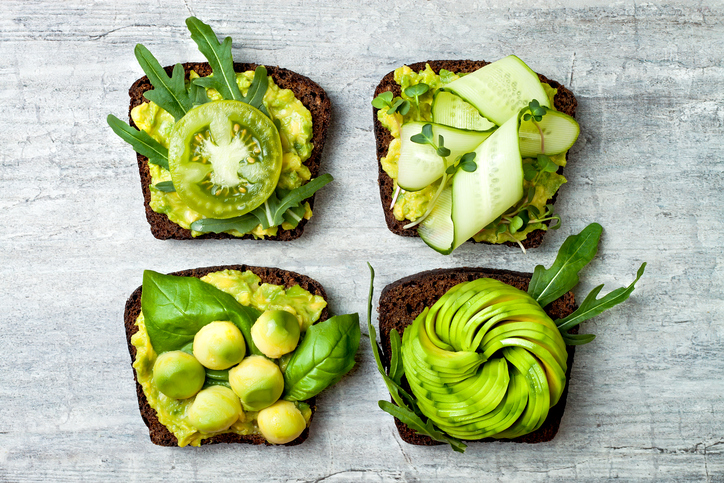 It’s Friday and you’re wondering why you’re back at work. You spent the week celebrating the Red, White and Beer, and now you’re sunburned and all burgered out. Blame the chlorine or the salt water. Or the seemingly unending spread of wings, nachos, bean dips and America’s trendiest snack — guacamole.

Deep in the heart of Mexico’s Techuacan Valley, avocados — the fruit to surpass all fruits — grew in relative obscurity for centuries. Beloved by prehistoric giant sloths and armadillos the size of smart cars, this self-pollinating, tree-dwelling berry looks pretty nondescript. Its bumpy, purplish-brown skin could just as easily be a kiwi or an eggplant. But the avocado is a grower, not a shower. For its lackluster skin contains a fruit like no other — a soft-green mush that’s one-part refreshing and one-part meaty richness.

A protein, a vegetable and a fruit all in one, the “alligator pear” is the wingman of all wingmen. It blends effortlessly with a seemingly endless variety of foods and flavors, but it’s especially awesome with a dash of cilantro, a squeeze of lime, a sprig of salt and handful of chopped ‘maters.

Forget meatloaf, American cuisine has improved exponentially over the last 50 years. It’s spicier, danker, more international. But for a long time, avocado was better known as a 1970s interior design hue/abomination than America’s most delectable fruit.

Your avocado-green mini fridge may be out, but the fruit itself is most definitely in. Thanks to a pretty kickass PR machine, Americans will eat more than 80 million pounds of the green stuff this year. (Yes, we live in a world where even a fruit can have a hype man.) The avocado launched its publicity crusade almost a century ago, and these days it’s finally winning.

In the 1990s, Americans ate 1.5 pounds of avocado a year. But in 2012? That number skyrocketed to five pounds. That’s a hell of a lot of chips and guac! Besides some pretty awesome PR, what’s behind the ‘Cado Craze? For starters, you can thank California, that hipster-hippie den of liberal elites, and its passionate consortium of avocado growers. Add in America’s rapidly expanding Latino population and the end of a ban on Mexican avocado imports, and you have a mushy green storm of snacking goodness. 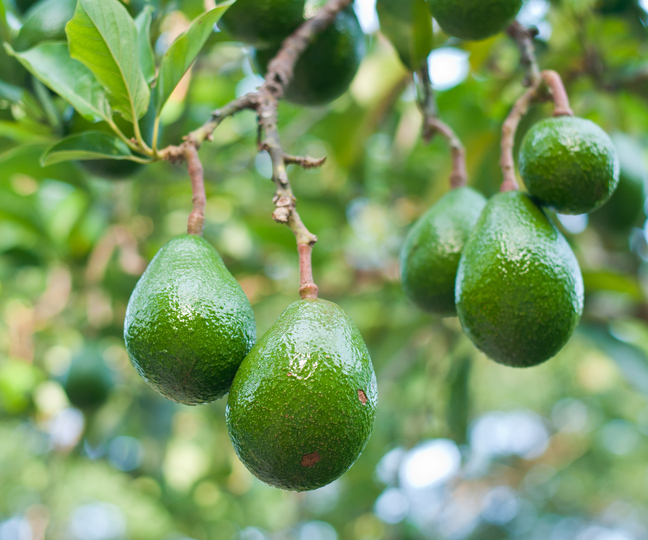 Guac, Guac Everywhere. All of it to Eat.

Like kale, greek yogurt and other superfoods that have come and gone, avocados are an aspirational fruit. The typical avocado connoisseur is a health-conscious, college-educated woman with an income of at least $50,000. But avocado’s game wasn’t always this fresh. How did a fruit stuck in produce no-man’s land achieve its hipster street cred?

To answer that question, let’s go back to the beginning. This bumpy, olive-skinned superfruit was once known by the rather unappealing moniker, the alligator pear. But the California Avocado Growers Association knew they had to do something to sell their fruity friend, and thus, the avocado or calavo was born. Nevermind that this exotic, infinitely rhymable, roll-off-the tongue moniker came from the Aztec word “ahuacacuahatl,” which literally means “testicle tree.” But really, how many Aztecs are around to remind us? 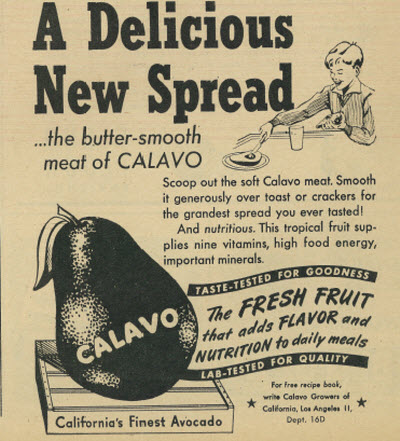 The name change was the first step in a rebranding that would take decades. Growers had a hot name, but now they needed to convince Americans to fall in love with a fruit that was neither sweet, attractive or ripe off the tree. Not to mention its suspect texture. Avocados were also hard to grow in the U.S., leading to sky-high prices and rampant thefts of these “butter pears,” which could sell for $5 in today’s money on the black market.

What to do? Savvy marketers began billing avocados as a luxury item. And we all know how Americans love their luxury. In the 1920s, the California Avocado Society placed ads in “Vogue” and “The New Yorker,” declaring avocados the “aristocrat of salad fruits.” Recipes pairing avocados with grapefruit and lobster soon followed. 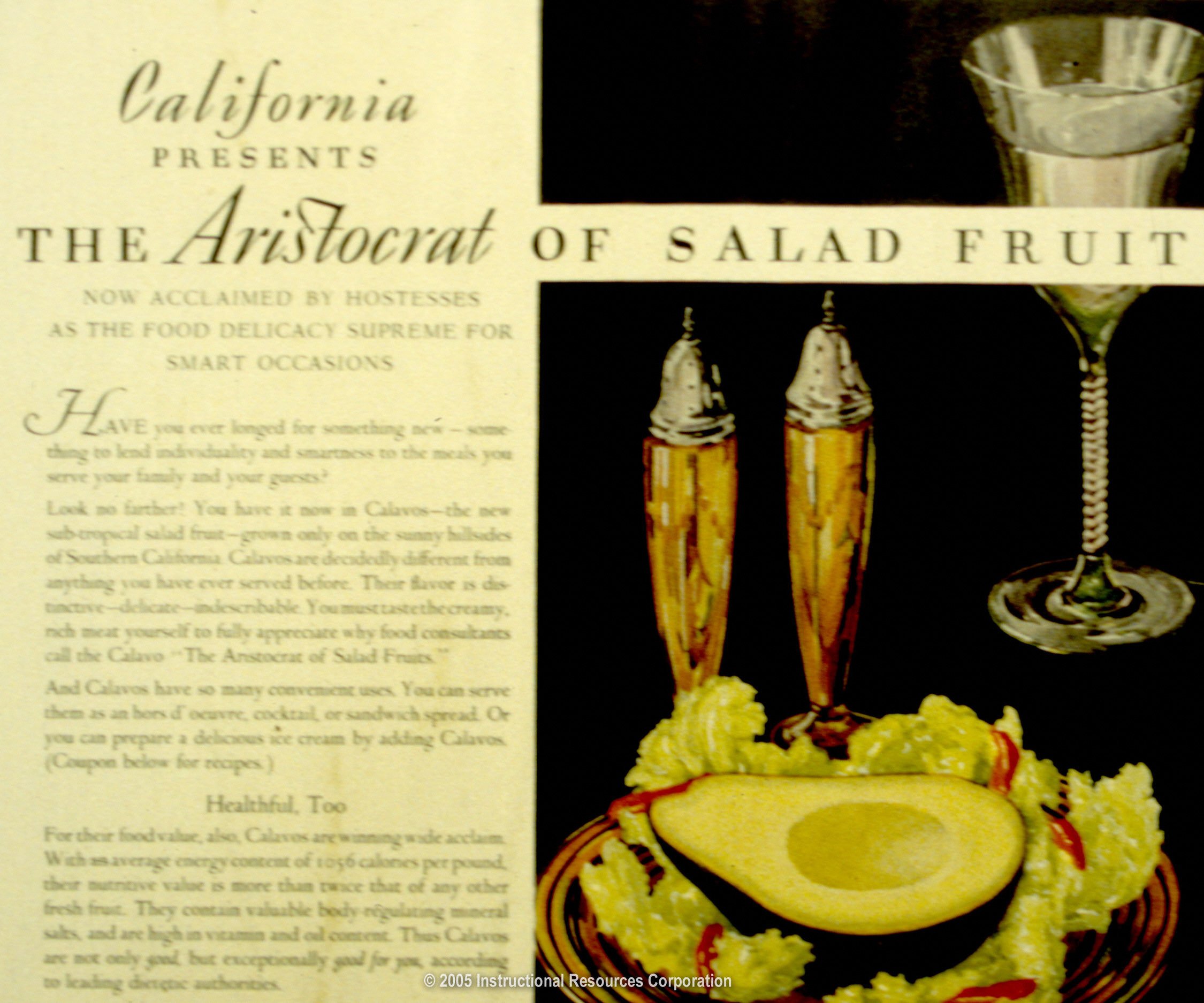 A Star Is Born

Then came the 1980s and the age of low-fat. Despite ads showing supermodels like Angie Dickinson munching on the superfood, avocados didn’t stand a chance in the age of the thighmaster.

Greed was good and no one wanted to eat a fruit that tastes best when muddy brown. Enter PR giant Hill & Knowlton’s “Mr. Ripe Guy,” who tried to convince people that ripe avocados may look gross, but they’re actually super good. By the 1990s, the firm launched a contest to find his wife,” Ms. Ripe”. The winning spokeswoman won a trip to Hollywood and a minor role on “Baywatch Nights.” 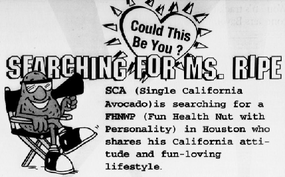 While the ad world was doing its best to make avocados the second coming of sexy, many Americans still didn’t know what the heck an avocado was. And only a select few could pick them out in the produce aisle.

But the “Guacamole Bowl” would change everything. By the 1990s, the Super Bowl had became a Bacchanalian food fest of dips, wings and mega-slice pizzas. And what better way to advertise your weird fruit than a national day of eating?

The avocado lobby cooked up the “Guacamole Bowl,” soliciting recipes for the green goo from NFL players and their families. And while no one really remembers who won the 1992 Super Bowl (ok, maybe some do), everyone remembers guacamole. It was the real MVP of the game, as guacamole factoids filled newspapers and sports reporters chowed down on guac from the press box at the big game.

It’s no surprise then that the high holy days of guac sales are Cinco de Mayo and Super Bowl Sunday. And perhaps this is why California avocado sales soared by 70 percent between 1988 and 2000.

It’s hard to make a food go viral, and the road to foodie gold is paved with rotted fruit. Just asked kiwis. They tried to tie their fuzzy brown skins to Groundhog Day, but alas, no one took the bait. Very few foods get the pumpkin-spice treatment, though hall of famers include Tang, La Croix, bacon and Greek yogurt.

We can thank our parents for avocado-colored kitchens, but our parents can thank us for all that sweet, sweet guac. Just search “avocado” on Buzzfeed (the most millennial of websites), and you’ll find recipes for avocado breakfast pizza and articles like “The Worst Avocados That Have Ever Happened,” “15 Next-Level Ways to Eat Avocados” and “Which Avocado Product Should You Decorate With?”

Perhaps no other food has been as celebrated and as maligned as avocado toast. Australian millionaire Tim Gurner recently implied that millennials couldn’t afford homes because they were too busy shelling out cash for avocado toast. Sure...

Nebo recently subscribed to a CSA delivery service and the avocados are the talk of the office. Walk into the kitchen any time of day and you’ll find someone mixing up spicy guac or spreading avocado on a turkey sandwich. Of course it doesn’t hurt that avocados are actually good for you — low in calories and packed with vitamins and healthy fats.

Avocado is soaring in millennial imaginations, and its rise to greatness follows the well-worn path of the American dream. How did this lumpy, unsweet, testicle-shaped fruit go on to become the country’s trendiest food? Marketing, baby. Only in America can Norma Jean become Marilyn Monroe and bongo-drumming Matthew McConaughey become Oscar-winning McConaughey.

How long will avocado stay on top? Will it go the route of Tang, edible gelatins and fidget spinners? As a lover of all things Tex and Mex (sorry Mom, the other holy trinity is salsa, guac and queso), I hope avocado is here to stay. But I prefer mine on salads, as guac or as a sandwich spread. Let’s just leave it there people. Although, when has the American imagination ever left well enough alone?

wow! that's an extremely fascinating story. I'm really keen on avocado, but I've never thought it's a big marketing case. This research inspires me to prepare a thesis paper on marketing. Thank you!

Bravo! Well done. You made me salivate with hunger for a guac-fix. My grehlins are stirring. 😋