The Inverted Pyramid & The Assassination of Abraham Lincoln

The inverted pyramid is a simple principle: important things first, not-so-important things later. In fact, it's so simple it sounds not worth mentioning. Does anyone in this fast-paced age really need to be told to get to the point? Unfortunately, yes. Content producers all over the world, from big brands to hobby bloggers, unknowingly violate this principle on a regular basis.

What follows is the report of President Abraham Lincoln's assassination, a report that would not only shake America to its core, but also establish the inverted pyramid as a precedent for journalists and content creators for years to come. Take it. Learn from it. Use it.

This evening at about 9:30 p.m., at Ford's Theater, the President, while sitting in his private box with Mrs. Lincoln, Miss Harris, and Major Rathbone, was shot by an assassin who suddenly entered the box and approached the President. The assassin then leapt upon the stage, brandished a large dagger or knife, and made his escape in the rear of the theater. The pistol-ball entered through the back of the President's head and penetrated nearly through the head. The wound is mortal. The President has been insensible ever since it was inflicted and is now dying.

About the same hour an assassin, whether the same or not, entered Mr. Seward's apartments, and under the pretense of having a prescription, was shown to the Secretary's sick chamber. The assassin immediately rushed to the bed, and inflected two or three stabs on the throat and two on the face. It is hoped the wounds may not be mortal. My apprehension is that they will prove fatal. The nurse alarmed Mr. Frederick Seward, who was in an adjoining room, and hastened to the door of his father's room, when he met the assassin, who inflicted upon him one or more dangerous wounds. The recovery of Frederick Seward is doubtful.

It is not probably that the President will live throughout the night. General Grant and wife were advertised to be at the theater this evening, but he started for Burlington at six o'clock this evening. At a cabinet meeting at which General Grant was present, the subject of the state of the country, and the prospect of a speedy peace was discussed. The President was very cheerful and hopeful, and spoke very kindly of General Lee and others of the Confederacy, and of the establishment of government in Virginia. All the members of the cabinet, except Mr. Seward, are now in attendance upon the President.

I have seen Mr. Seward, but he and Frederick are both unconscious.

Thanks to the folks who wrote Universal Principles of Design for pointing out this fascinating letter and highlighting this timeless principle of content creation. 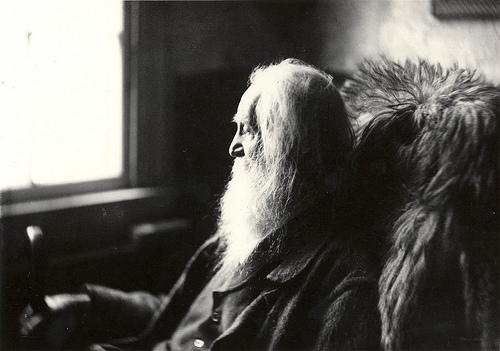 Why Autonomy At The Office Isn't Enough

Studies have shown that autonomy, self-governance, is a crucial factor in determining how much enjoyment people derive from their work. When bureaucracy makes your efficient work inefficient, you get upset. When your boss won't let you take projects in new directions, you get upset. Eventually, a lack of autonomy creates depressed, unmotivated employees.

But it's easy for this simple truth to yield a defeatist mentality that doesn't help employees at all. Instead of anything useful, it provides a scapegoat. My work place is stifling my creativity! The bureaucracy is unbearable! This kind of attitude ignores the fact that we all have choices to make, for better or for worse.

When it comes to our work, or anything for that matter, the only way to get better is by practice, and the truth is that no work place provides enough time for practice  -- there's too much work to be done. You have to choose to practice on your own time. As much as employers need to grant autonomy at the office, employees must choose discipline at home.

The real challenge isn't finding a place to work that let's you shine (there are actually more of those than you might expect), but choosing to shine no matter where you work.

5 Tips to Avoid Writing that Reeks

I hate spam, but not just because it's uninvited and I get a lot of it, though both are true. I hate spam because of the way it reads. Whether it's spam email, snail mail, web copy, or otherwise, spam stinks. It reeks of falsehood. When you read spam, you think, "No one talks like this." And it's true, they don't.

But normal people, people who hate spam just as much as me, often write words that read like spam. Even if those words don't come uninvited, they still irritate our senses because they have that same malodorous, unnatural quality as spam.

Writing that is imprecise, stiff, or awkward is a guillotine ready to snuff the life out of our messages. As individuals and as marketers we cannot afford to be anything but clear, honest, and compelling. Fogginess and facade are both deadly, and will bore your readers as much as spam.

Whether you're wrestling with articles, web copy, emails to clients, or blog posts, here are five simple tips that will keep your writing fresh and fragrant -- ready to impress, persuade, and make amends on your behalf.

These tips will help you avoid the smelly quagmire of inhuman writing and propel you towards a place of clear, compelling communication.

Bonus tip from Hemmingway (hat tip to Copyblogger): Recognize that 90% of what you write needs to be rewritten. Don't be afraid to take the time and effort to thoroughly edit everything, even emails and internal memos. Put the shit in the wastebasket.

One to One Doesn't Scale, And That's Okay

The internet has done a lot of good things for brand communications. Talking to and hearing from your customers has never been easier. But faster, easier communication isn't a one way street. You get to reach customers faster and easier, and customers get the same. Sounds great, right? But there's a threshold after which this trade off can no longer be maintained at a one-to-one exchange. The good news is, despite what many social media gurus will tell you, one-to-one dialog is not the holy grail of marketing communications.

Social media is a powerful tool for one-to-one communication, but it really only works that way for small businesses. Brands like Saddleback Leather who intentionally limit their audience and establish a premium position are primed to take advantage of using social media as a conversation mechanism. Larger businesses can't keep up with the size of the conversation, and so they really have two options: pretend to be one-to-one, or stop worrying about trying to talk to everybody.

Brands like Apple, Delta, Google, or Coke have no need to use social media to have conversations with all of their customers or potential customers; they're much too busy building better products, increasing awareness, and making sure their companies are ready for the future. These companies use social media to provoke conversations amongst their customers (customer-to-customer, not customer-to-company) in order to increase awareness. They also use social media to listen to the market, finding problems and opportunities in their marketing strategy and in their products. What they don't do is try to respond to every brand mention.

In between the small business and the mega-brands are a slew of mid-sized businesses who are also trying to figure out how to use social media. If you're not Saddleback Leather and you're not Coke, then there are still opportunities to use one-to-one conversations (customer support, rewards programs, expanding into new markets), but there is also significant value in letting your customers do the talking for you; whether you unleash a creative engagement to stir something up or simply monitor the pre-existing social media landscape, there are plenty of opportunities to benefit from the one-to-one conversations your customers are having without being a chatterbox yourself.